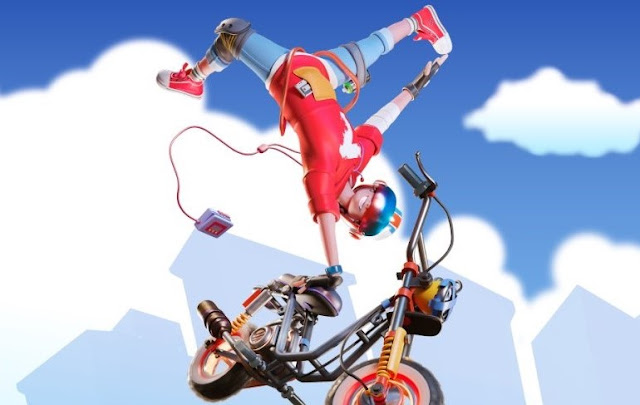 Urban Trials Tricky is fun, agreeable, and plain. It’s the fourth in Tate Multimedia’s Urban Trials series of motorcross-trials videogames, and like the others before it, there isn’t really any vastly distinguishing factor setting it aside from previous games in the series, or the similarly named Trials series by RedLynx. Urban Trials Tricky is a 2D racing/platformer hybrid with a scoring system inspired by the Tony Hawk Pro Skater series, and if you haven’t played a game in the series before, get ready for some mild, inoffensive fun.

Starting with what I do like about Tricky as opposed to other games in its stable, I feel that Tate Multimedia’s design in this game is rather forgiving compared to most other Trials games. Levels are built largely without bottomless pits or obstacles designed to knock your rider off their bike; the focus is less on making it through an obstacle course unscathed, and more about pulling off some flips and tricks by getting air from the obstacles. It’s not an exhausting game to play, there are fewer restarts than I expected, and the overall tone is colourful and festive.

Tricky has stages split into three main game-modes – Trick, which sees players earning scores in a combo/multiplier system in a three-minute limit, Timer, which is the classic obstacle course from Point A to Point B, and Competition, where the game will tell you what trick to do and players need to obey instructions to earn points. The player can earn up to five stars for their performance on each stage, and if they average a 4 or better on previously unlocked stages then they can unlock the next one. This game heavily emphasises the Trick category – there are far more levels built around Trick, and the game is particularly interested in letting players customise their tricks and express themselves through flips and wheelies. 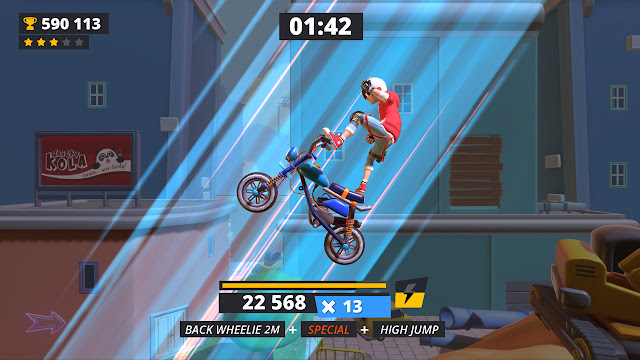 Tricks are simple affairs, done with either the Y or the X button while the bike is airborne. As the game progresses, the player unlocks additional tricks such as holding Y or X while doing a wheelie, or tapping Y before holding X (or vice versa) for an “advanced trick” – a different animation with slightly more startup time. Filling up a fighting-game-style special meter allows the player to hold L2 and R2 in the air for the ultimate trick, which slows down time and racks points up like nobody’s business. The system is extremely simple – there are no outlandish control-stick manoeuvres like in Skate; it’s just simple button presses to pull off gravity-defying stunts which definitely don’t look safe.

It’s unfortunate then that the scoring system in the Trick category is somewhat broken. It’s reminiscent of how points and multipliers work in the Tony Hawk series – adding a new trick to a chain increases multiplier, while holding any air or wheelie trick increases the point score. If the player lets the combo meter run out, they earn the point score times the multiplier. If they crash, fall off their bike, or hit the ground while holding a trick button, they earn the point score but the multiplier is lost, and they need to start their whole combo again.

The result is that the blueprint to getting five stars on any trick stage is exactly the same, regardless of level geometry. All the player needs to do is a few flips, a few wheelies, turning around as soon as it is safe to do so, maintaining their combo of at least x15 until they reach a ramp which will give them big air, and then holding L2 and R2 until they hit the ground. This will result in a combo worth well over a million points, enabling anybody to surpass the 5-star threshold for the level in a matter of seconds. I literally would then put the Switch down for two minutes until the game allowed me to move onto the next level. 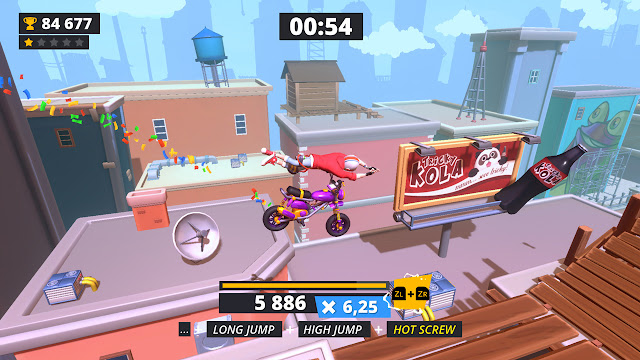 The scoring system did not incentivise exploring the level or making use of the game’s wide library of tricks; there was no point bothering with the advanced tricks which required multiple button presses, when the most effective thing the player can do is filling the special meter and holding the triggers. It made climbing the leaderboards feel trivial too – other players would be posting enormous scores earned by maintaining combos lasting for minutes.

Timer levels are more fun; the levels are designed cleverly to encourage the player to use all their movement tools, including their jump, their 180 turn and acceleration and brake in just the right times. While the levels in Tricky don’t quite have the spectacle of obstacle-focused Trials games, the time limits are well designed and achieving 5 stars is a worthy challenge. It’s a shame that they are so few and far between, and most are over in less than a minute. Competition levels are even rarer, and unfortunately have some of the smallest and least interesting platforms to work with. Competition is the mode which forces the player to try the whole gamut of possible moves, since otherwise the animations for the two-button and three-button tricks might have been wasted.

Urban Trials Tricky ends far earlier than I thought it would – there’s only a handful of levels and I breezed through them all in a matter of hours, but perhaps it was because of the exploit I’d discovered for all of the Trick stages. I would have wanted further spaces to play around in, since the real strength of this game was just letting players ride and bounce around the creative and incredibly vertical zones. The physics and level design stand out here, considering that Tate Multimedia has had a few games in the series under its belt already. I would hope that future games in the series have better events and scoring systems which effectively test the player’s understanding of the mechanics. What is available here is a fun game, and I certainly didn’t hate the time I spent with it. But it could also have been so much more.