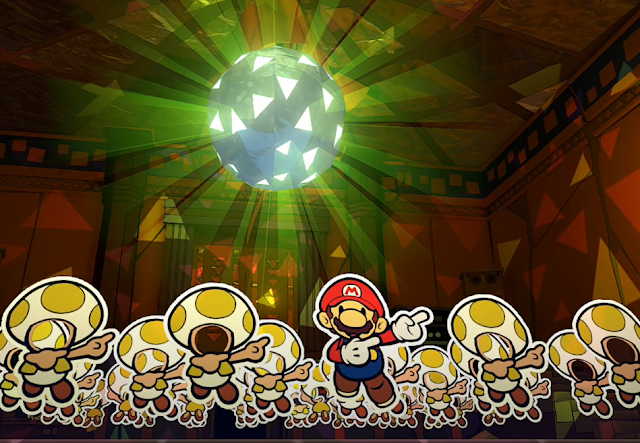 The performance of the Paper Mario series (and the Mario RPGs in general) has been patchy. The first two – Paper Mario on the Nintendo 64 and The Thousand-Year Door on the GameCube – are rightly considered in the upper echelons of Mario’s very long career. More recent efforts, such as Sticker Star on the 3DS and Color Splash on the Wii U, haven’t been nearly as celebrated. The good news is that The Origami King brings the series back into equilibrium and should restore some faith among fans going forward.

There isn’t a second of Origami King that doesn’t drip with personality and verve, and I suspect that even people who aren’t entirely sold on the combat system (and we’ll get to that later) will play on because the game succeeds in the core mission for any Paper Mario title; it’s an absolutely charming delight. From start to finish this one has a good-natured and warm sense of humour and spirit that is irresistible. As I mentioned in a video preview, it’s very, very dry, and if there is anything to be concerned with there it’s just that it may not be so resonant with some audiences. Younger kids, in particular, might breeze through much of the stuff that is so understated and twee, but those same jokes had me choking on my beers and glasses of wine on a regular basis, in fits of giggles (it’s been a long couple of weeks, don’t judge me).

It’s not necessarily a bad thing that the humour’s pitched beyond the taste of younger audiences though. The best children’s television and film have to have things for adults to love on their own terms. It has to be that way, else it’s hard to get the parent’s buy-in The best animated films have humour that children will find broadly entertaining, while the parents that have been dragged along are chuckling along and having every bit as much fun with it. Origami King does that. Parents will want to play along with their kids for the nostalgic humour about the relationship between Mario and Bowser, Peach, Luigi and Toad. They’ll laugh at the flat (pardon the pun) delivery of jokes, and because they’re playing along, if the child does get stuck anywhere, they’ll be there to help. The lasting impression by the end is that Origami King is intelligently-written to be genuinely appealing to all ages. 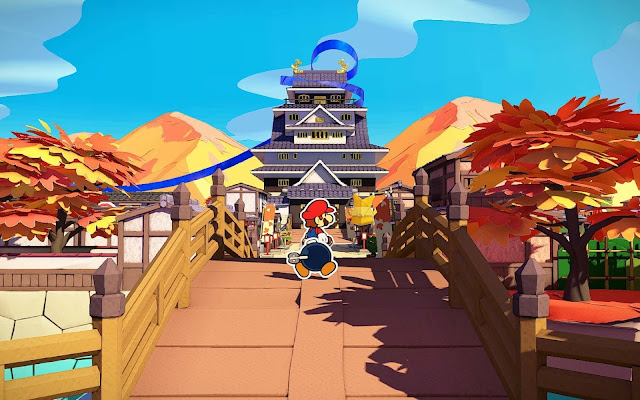 While the difficulty of Origami King is set fairly low overall, it’s also very puzzle-orientated and that might trip some up, so having a second pair of eyes and a different way of thinking is the way to push through the game. Mario RPG titles are well known for having environmental puzzles, and Origami King does plenty of this too. In addition to standard spatial and logic puzzles, there are also moments where you’ll need to summon up special abilities to interact with the paper-based environment and enemies. Mario has companions with their own abilities and as the game goes along the eventual complex interactions of all these things will be just enough to keep just about everyone thinking as they play.

In fact, the combat is a puzzle of its own, and that’s the really fascinating part of The Origami King. It’s also the part that will be the most polarising, and if anyone finds something to dislike about this game, it will be in the combat. This game is not a JRPG, though it has the superficial appearance of one. Rather, when combat is joined, Mario is placed in the middle of a board with a series of circles, and enemies are placed on “spaces” in those circles. Then you’ve got a limited number of “turns” and time to move those circles around and line all the enemies up neatly. Do this, and the battle will be over effortlessly, as Mario gets a massive power boost and will be able to attack and defeat all the enemies in the rows and groups in a single turn. In other words he’ll clear the board without being counter-attacked. Fail to make those neat lines, however, and the enemies will get their counter attacks in and Mario will take damage.

Boss battles are a kind of reverse where Mario needs to navigate his way from the outside of the rings to the middle, where the boss is placed, at which point he’ll get the opportunity to launch an attack. These again are a movement-based puzzle (how to optimise Mario’s movement to the middle), and will test you to use every resource and ability that you have available. 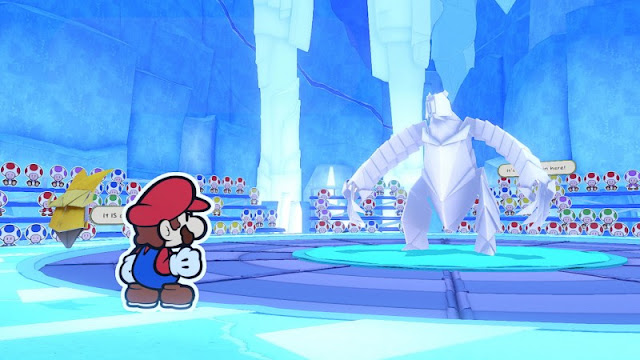 It’s a great system that tests logic in the ability to move “pieces” around a board, and reminded me of a board game that I distinctly remember playing as I was growing up, but it was so long ago now that I can’t remember the name of it. In that game, too, you needed to move rings around a board in order to facilitate the movement to the centre of it, and I find the logic behind this kind of puzzling to be fascinating. At first the lack of RPG-like systems bothered me; the puzzle-like nature of these battles lengthens each of them, and with a lack of experience points and levelling I found myself wondering why I should bother with them at all. Furthermore, those initial battles just aren’t representative of the quality of the system. Enemy patterns are too easy to figure out and therefore the actual challenge of the system – the logic rather than the RPG skills – was non-existent. However as I settled into the game’s rhythms the process of lining up the enemies properly did become challenging enough to make me think, I grew to enjoy the system for what it is, rather than dislike it for what it is not. It’s something genuinely different, creative, and vibrant, ensuring that no two battles are the same and that the common enemies are just as much of a “test” of the system’s skills as the bosses.

The world is a joy to explore, too. Paper Mario isn’t truly “open world,” but it is open ended in its approach to the world, in that you’ll arrive in an area, realise that you’ve got a fair few different directions to explore, and then get lost in all the little side stories that you’ll come across as you play. There’s no part of Paper Mario that’s excessively long if you move in a linear “point A to point B,” without stopping along the way, but this is the kind of game that warmly invites exploration and diligence in completing everything along the way. Unlike most open world games there aren’t frivolous distractions like pointless collectibles or minor prizes; pretty much every distraction you’ll get up to in Paper Mario is a genuine thing that you’re meant to have fun with and rewards you with something major, if not essential.

The Origami King has a… “scatterbrained”… approach to world-building, with different areas being more-or-less complete breaks from one another, though the actual transition between them tends to be seamless. This is part of the charm. Part of the reason the humour carries so effectively through the game is because Nintendo never stops giving itself new situations and environments to throw down different ideas. One moment you’ll be taking on again goombas in wild-west themed standoffs. The next you’ll be playing spot-the-reference to classical Mario tropes. Birdo shows up for no apparent reason whatsoever. Trees break out into song. You need to rescue a lot of Toads through the adventure (they give you a power-boost in combat), and every single one of them has something witty to say. 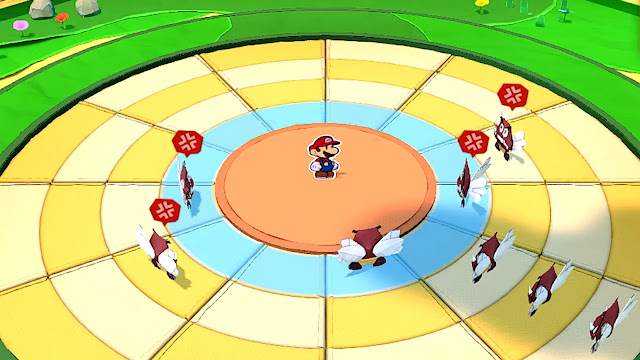 “All right, I’m just gonna ask, is that Luigi’s origin story?” A Toad quizzes when, after rescuing him, he discovers that he has been unfortunately painted green. “Am I the Luigi of Toads?

“You know what? I’m gonna lean into it. Gonna find a green hat, grow a ‘stache, work on my sneer,” and then he putters off. How the writers manage to infuse such deadpan tone into a game that isn’t even voiced is beyond me, but I just love it.

If I was to have one criticism of The Origami King, it’s that it doesn’t do too much with the origami motif. When you’re turned into origami you become a bad guy, and I do like how many of Mario’s enemies aren’t this time around when they’re in their “normal” paper form. It’s a quirky way to subvert the usual expectations that we have for Mario’s interactions and while the Paper Mario series has been going down this path for a while now, this is the best-realised version of that. However, that aside, it would have been nice to see more done with the origami beyond shapes and special abilities. It comes across as something of an arbitrary way of differentiating characters and giving the game a visual vibrancy, and that could have been achieved with any number of different approaches. It would have been nice for the game to do a bit more with the origami such that it wouldn’t have been possible otherwise. 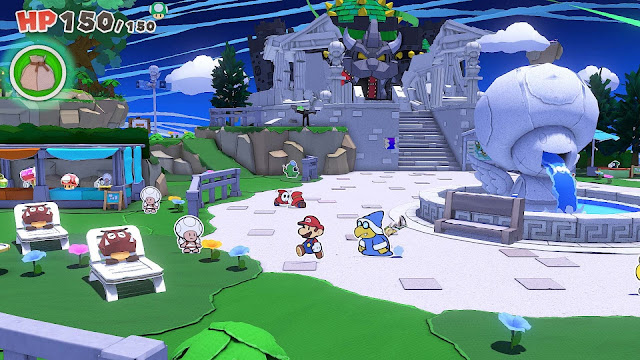 Paper Mario is such an eclectic and generally experimental series that it’s difficult to define what makes a good entry in it. Some people like the specific combat systems that the series plays with. Others enjoy Mario in the JRPG context. For me, it’s the sense of humour that’s important. On that basis, I couldn’t be happier with The Origami King. I feel that there will be a discussion about that ring-based combat system and some of the world design elements, but through it all, I do think that most people will simply love the deadpan, dry, droll and refreshing humour, and a general return to form for Paper Mario at what it does best.

Developer Q & A: On what to expect from Gust’s upcoming Fairy Tail