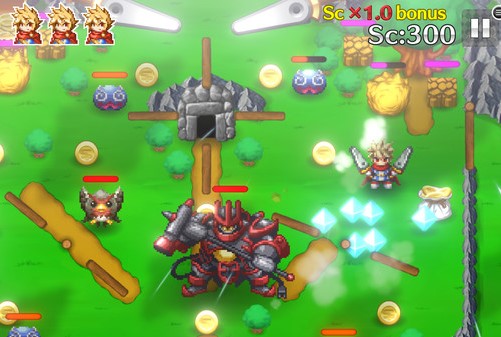 Brave Pinball takes JRPGs and pinball and smooshes them together like you’d smoosh two totally incompatible characters together in a fan fiction… and it looks great. Developed by Apollosoft and Power Unit, the game will release on Steam on August 4, and will support English, Japanese, Simplified Chinese and Traditional Chinese for play.

There are no difficult rules. Use the left and right flippers to shoot the hero and defeat the groups of monsters led by the Demon Dragon King Boruaka! That’s all there is to it!

There are many enemies to battle in various Japanese RPG-style stages such as grasslands, forts, caves, forests, and more, and in order to head to the next stage, you need to have a good control technique over the hero. Will the hero find the Demon Dragon King Brouaka that lurks in the darkness and restore peace to the world? (The boss may not be alone…)

Of course, Brave Pinball also has a high score challenge, which is very important in pinball! Each time you level up, your score’s rate of increase will also increase.

There have been plenty of efforts to meld pinball with other genres in the past, but it’s a tough one to actually pull off, because pinball is a very distinctive entity with a flow and design to it that is so distinctive that it doesn’t “play well” with other genres. But this really does look like a lot of fun. Hopefully it’s enough of a success that the team look to console ports too, because this game has “console port” written all over it.

In the meantime, enjoy the trailer: