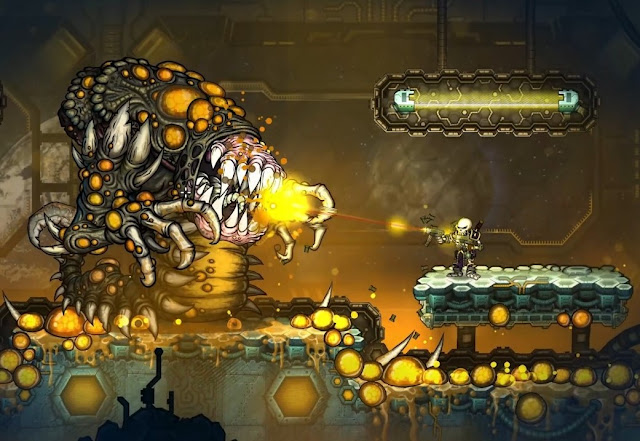 Fury Unleashed is a far more heartfelt game than I expected it to be. This isn’t how I anticipated starting this review. In my notes I’d written that it plays a little like Metal Slug and a lot like Comix Zone, I’d written that it has interesting. though predictable rouge-lite mechanics and fantastic gameplay momentum. I’d noted that its developer, the rather ordinarily-named Awesome Games Studio, previously made Yet Another Zombie Defense, a game which while competent also recognises its lack of originality in its title. And Fury Unleashed isn’t an exciting, original concept either, despite its long period of Early Access and the developer’s close communication with fans. But it’s one of those games which is all-around competent, and then one little thing tips it over into greatness.

Let’s talk about Fury Unleashed’s story first. The premise is that players take control of Fury, a generic comic book action hero in the vein of Flash Gordon or Turok. Fury is a stoic hero who solves problems by shooting them and has his bearings around every form of weapon imaginable, and so his prowess takes him to all sorts of universes, namely a vaguely Amazonian jungle, a fortress ruled by future-robot-Nazis and an alien mothership. The game’s levels are structured like chapters of a comic book, with each panel being a procedurally generated room of enemies that Fury needs to shoot dead. The art is gorgeous to match the comic-style source material, with bold colours and familiar yet memorable designs which evoke the sensation of reading a Modern Age graphic novel.

But here’s the ingenious conceit; there’s an overarching story of Fury’s artist, John Kowalsky, struggling with expressing his creativity and losing faith in the value of Fury as a concept. From the comics the player guides Fury through, we can see that the character initially doesn’t have much value. Solving problems with violence is all that he’s good for. The lack of variation between rooms was initially stifling to me, I wish that there would have been a greater emphasis on side characters or world-building, which SEGA’s cult classic Comix Zone did much better. But Fury Unleashed keeps finding interesting ways to use its conceit to make interesting commentary on the escapist narratives that the game parodies, and the emotional honesty of the plot twists kept my opinion of the game high. 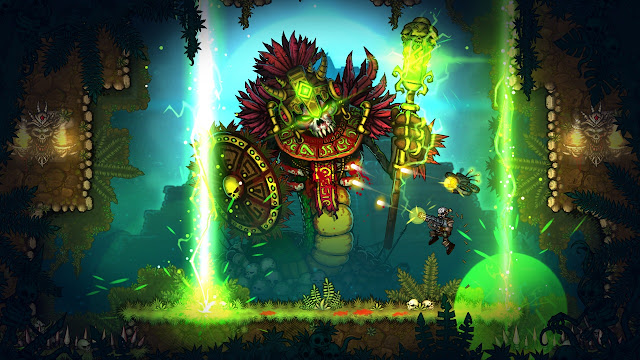 The moment-to-moment gameplay is solid, lightning-fast and unlikely to win over people who prefer something more methodical than the chaos of Metal Slug. That being said, it’s very satisfying on a visceral level. Animations are punchy and responsive, and the player has a wealth of movement options. On the PC controlled by WASD and mouse, the player gets access to double jumps, dashes, 360 degree aiming, melee attacks, grenades, goomba stomps and an activatable super move. I found myself often forgetting to use at least one of those options (sorry, super move) but thankfully Fury Unleashed is one of those games which rewards flow without punishing sloppiness. Sometimes, 2D shooters can start feeling methodical. The safest, and thus optimal, way to play is to kill one enemy at a time while hiding in a safe spot, inching forward as each subsequent enemy is taken out. It’s boring, and yet it’s the natural way players are inclined to approach combat in games (since we’re cowardly and risk averse) – so it’s great that Awesome Games Studio implements mechanics to fight against this urge.

Similarly to many great action games, killing enemies starts a combo, and keeping a good pace without getting hit will further increase your combo counter. As your meter rises you’ll earn grace shields which nullify an instance of damage, as well as health drops from enemies which would normally be inaccessible if you were to play in a more cautious manner. It’s a clever system which encourages risk-taking and keeps the pace exhilaratingly fast.

That being said, most of these perks need to be upgraded from the rogue-lite menu. It’s a shame that the game is largely balanced around the player having upgrades in the later chapters, which means the first few levels will be repeated over a few times until Fury is strong enough. As a tip, the most crucial upgrades to get early on are the Combo Shields and Health Drops, since these will help your character last longer and thus collect more currency to get stronger. I don’t have much to complain about since I remember repeating the first levels of Metal Slug X and Comix Zone over and over before I got good enough to make it to the later stages. At least Fury Unleashed isn’t unreasonably difficult. There’s no shame in turning the game to Easy either, which boasts a handy assist mode for those who just want to experience the story without having to grind their character. 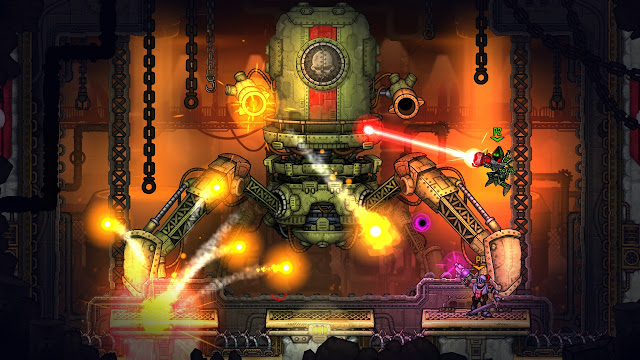 If I had to make a complaint about Fury Unleashed’s gameplay, its that the rouge-lite procedural generation occasionally falls short of the carefully crafted nature of most classic run-and-gun titles. The game’s rooms often fall back on traps and environmental hazards to ensure the player isn’t breezing through the levels too easily, and the generous health bars don’t stop mistakes from feeling cheap. It’s why I looked forward so much to the game’s boss battles, which were carefully designed around the player’s abilities and offer a manageable challenge that is a delight to surmount. Although the game has a wide arsenal of conventional and sci-fi inspired weaponry on offer, the random generation means that each option needs to be fairly valid and thus everything feels safe and ordinary. It was ultimately the story, the combo meter and the bosses which kept me playing long after the room-to-room gameplay had worn thin, and it’s an unfortunate blemish on an otherwise immensely replayable game.

Fury Unleashed is a step better than what you would expect from a generic-looking run-and-gun action game. Its intelligent premise and sheer adherence to fun in all its forms makes it a great game for unwinding or chasing that elusive feeling of flow. Say what you want about Fury and his two-dimensional escapades, but Awesome Games Studio had a clear vision for their game and executed it to an impressive degree of success.

You’ll be able to get the next Total War game for free!