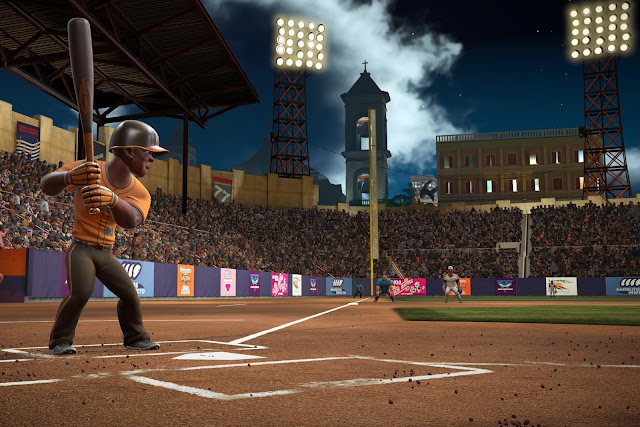 Super Mega Baseball 3 reminds me of the baseball games I used to really love playing back on the Nintendo 64 and early PlayStation eras, when they were both accessible (thus making them good for multiplayer sessions) and yet also a serious effort to do the sport justice. We’re not talking about arcadey nonsense and endless home runs here… but we’re also not talking about the overwhelming depth and complexity of an MLB The Show.

Related reading: Our review of this year’s MLB The Show.

Super Mega Baseball 3 looks like it should be an arcade game. The characters all have stupidly big heads and silly expressions. As a nice touch, it’s multi-gender, with men and women playing on the same teams, interchangeably, because this is a video game and that’s okay. Animations are amusing too (particularly when you sock a pitcher in the face), and there’s a nice lightness about the presentation that makes it immediately appealing. This is the kind of game that you can pass a controller to someone who has never played it before, and they can immediately jump in and start swinging away.

One final, particularly important “arcade” element is the high score leaderboard. Playing well in-game nets you points, which can range from timing a hit well for a few points (even if you get out) through to getting a chunk of points for striking a team out without any of them hitting a base or run. The higher the difficulty the greater the points multiplier too, so cruising through on the easiest difficulty won’t net you nearly as much as winning a closely-contested match on a high difficulty. Your highest scores are then displayed on both global and friends list leaderboards and… well, my mates have a bit to do to catch me. I get competitive with my sports games, and having that top score is reason enough for me to play all the various modes while also challenging myself on the higher difficulty settings.

Once you’re in the game, though, for all the arcade-like presentation, there are some serious simulation elements to account for. When at bat you need to time the swing right, obviously, while also making sure that the batting reticle is in the right place over the ball. On the low difficulty levels, this will happen automatically. On the higher difficulty levels, you’ll be responsible for manually aiming it. The same goes for fielding – play on easy and your players will sprint to every catch by themselves. By the time you’ve hit middle difficulty settings you’ll need to take control of those same players to sprint towards more difficult catches, and on the highest difficulty setting you’ll have to contend with complete manual control.

Pitching is where the game becomes its most complex. You’ll need to select a pitch and then a target within the player’s “batting box.” Then you’ll have a split second to line an icon that represents your accuracy with a cursor that represents where you want to pitch the ball. Line them up perfectly and your pitch will be hard to hit. Miss the mark completely and you’ll either pitch a ball, hit the player to give them a walk, or set up an easy home run hit. It’s a system that you’ll understand instantly, but then struggle to truly master. In fact, all three elements of gameplay in Super Mega Baseball are finely tuned to make even the most casual player right through to the most hardcore baseball fan has something to enjoy. The learning curve tuned to a degree so far beyond what most games offer that it’s truly a standout example that all developers should pay attention to.

There are no proper licenses in Super Mega Baseball 3, though the game does compensate for that to an extent with a full player and team roster creator. If you can be bothered spending the time in there you could create any league you’d like around the world, though it’s an exhausting process, particularly if you want to pay attention to making sure that the players all look different enough. It’s not the end of the world for this particular game, though, as the arcade trappings make the unlicensed players and teams almost appropriate, and you’ll have your favourite team and players within no time. 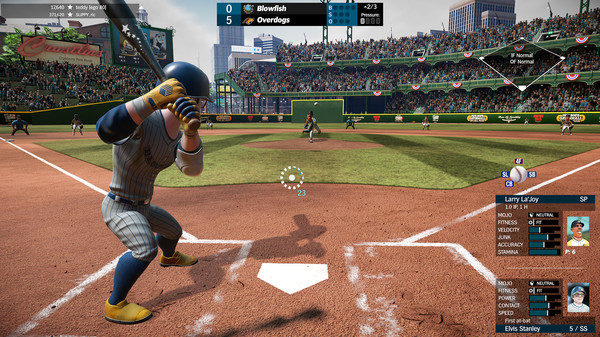 It’s quite easy to get invested in your team over the more extended modes such as the seasons. Thankfully a full season in Super Mega Baseball isn’t over a hundred games long as it is in a certain baseball league, but the couple of dozen matches that it does run is long enough to work as an emergent storytelling experience. Statistics are tracked for every player, and you bet I got excited every time I had bases loaded only for the next player at the plate to be the one that had previously rescued games for me with a perfectly-timed home run hit. Because the scoring system means you’re constantly encouraged to edge it towards your upper limits, I’ve had all kinds of games where I’ve come from behind to sneak a win in the 11th inning, or managed to lose a nail-biter from a single bad pitch at the bottom of the ninth. Too many sports games allow you to get into a rut where you cruise through, expecting to win every game without being tested too much. Super Mega Baseball instead encourages you to find the precise level of difficulty where you may well lose, but you’re also not going to get slammed without a hope.

Finally, it’s worth noting that there’s an efficiency to Super Mega Baseball that’s attractive. Games are over in around a half-hour and proceed at a snappy pace. Is there the same depth that an MLB The Show offers to the real fans of simulation? No. And there’s no story mode, no card-collecting mode, or anything else that can chew up hours and leave you wading through a web of multi-tiered menus. To an extent, this does mean Super Mega Baseball feels limited in application, but once you start playing, it’s almost painfully difficult to put the controller down.

As I wrote at the start of the review, Super Mega Baseball 3 feels like the baseball games I used to love from a few generations ago. Liberated of the “depth” of modern sports games, there’s an efficiency to the action that is appealing, and the gameplay modes that it does offer are all compelling. On the pitch, the difficulty curve is perfectly tuned, and while the game doesn’t innovate and is ultimately destined to be the kind of thing that you pick up for short bursts of play at a time in multiplayer, the accessibility makes this one so much more appropriate for that than most other sports games out there. It’s good, honest and clean entertainment, and that’s something a lot of sports game developers have lost sight of in their efforts to monetise every moment of their content.

Wasteland 3 gets its first developer diary