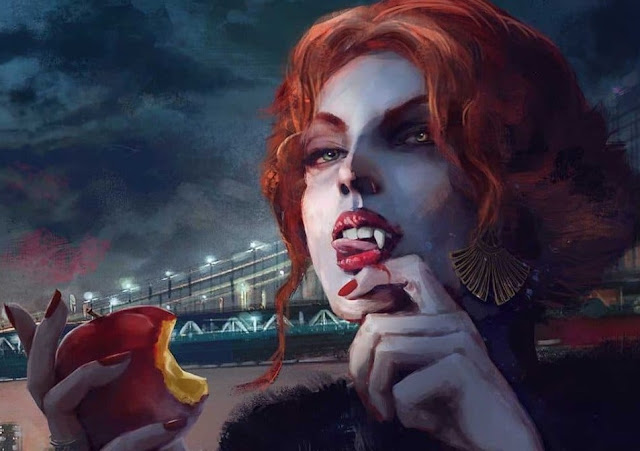 Vampire: The Masqurade is “the other” Dungeons & Dragons. It’s been kicking around since 1991 in pen-and-paper form, and there have been numerous attempts – unofficial and official – to recreate the game into video game form. The appeal is obvious, in offering a modern Gothic/punk setting, the chance to play as a vampire and get into the labyrinthine politics of the underworld. I do find it strange that Vampire: The Masquerade – Coteries of New York is the first attempt to do a Vampire: The Masquerade visual novel, however, because the principle difference between Dungeons & Dragons and Vampire is that Vampire positions itself as a heavily storytelling-focused experience.

The visual novel format is perfect for this kind of setting. You play as a young vampire who was “turned” by a mysterious stranger that disappears immediately afterwards. In most circumstances that would mean the end for you, because vampire culture doesn’t allow “newborns” to roam without a master watching over them, but luckily for you another vampire steps in to “adopt” you. And so it is you enter the underworld of New York, learning your way and trying to figure out how this all happened to you.

Of course your foster-master didn’t do this for altruistic reasons. Vampire: The Masquerade plays by the same basic rulebook as Game of Thrones – there are a number of different “houses”, and basically everyone is looking out for themselves, and will manipulate, cheat, and murder their way to power and prestige. You are adopted because you will be used as a pawn, and you’re regularly reminded of that. 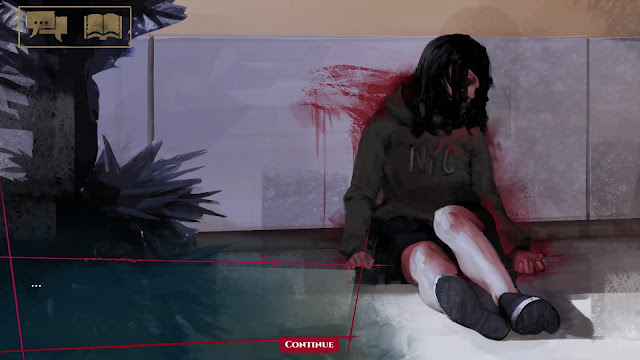 You’re a pawn with quite a bit of freedom, however, and most nights (because vamps don’t do days), you’re left to your own devices. What this means is that you set out to form a “coterie”, or gang, of fellow young and aspirational vampires. It’s a fun mob, to be fair. There’s a grizzled hardboiled detective, an “underground performance artist” (read: heavily tattooed woman that conducts all kinds of grotesque erotic vampiric shows – she’s just the best), magic-users, vampire theologians (somehow) and so on. You’ll spend time with them, help them with their various demands, and in return you’ll earn their loyalty that you can call on in the future. If there’s one thing that Coteries of New York gets right, it’s depicting a fascinating, vibrant culture that vampires participate in, from elaborate politics through to adult entertainment, and everything in-between.

Vampire doesn’t really hold back, either. While there’s nothing overly explicit visualised within the game, it certainly alludes to a wide range of perversions, and tonally the game does everything it can to remind you of the extreme decadence that vampires “live” their lives within. Unbeholden to any human laws or concept of morality and uninterested in creating any of their own (beyond the requirement to maintain the masquerade – so that humans never realise this world exists), vampires have an existence of extremes – extreme bloodletting, extreme eroticism, and extreme stakes – and while hostile and dangerous, there’s also a seductiveness of the experience that the game tries hard to capture.

Unfortunately the writing isn’t quite up to the task. Coteries of New York is generally written well, with distinct, interesting characters and scenarios, but it’s also not exactly Anne Rice. Part of the issue is that the writers felt the need to name-drop a lot of pop-culture references, which I believe was done to try and remind players that these events were playing out in the new, modern, world, but the visual aesthetic did that. There was no need to just casually mention that people were playing Fortnite or Call of Duty. A broader issue is technical in nature – the text box that the developers opted for is tiny, and only fits a few words in on the screen at a time. I believe, without even necessarily realising it, this limitation caused the writers to punch brief sentences out, and structurally Coteries of New York feels a bit sharp and disjointed at times.

Coteries of New York is much more interactive than most Japanese visual novels. In addition to having a great deal of control over the characters that you interact with each night, you’ll also be called on to make frequent responses to situations or conversations. Sometimes these options also include the ability to enact vampire powers, which can help navigate the more treacherous decision moments. Unfortunately those use up blood, and if you get too low on that there’s the chance that your character will go bestial, which isn’t a good ending for anyone. This is all handled quite organically, and really just means that when the edges of the screen start getting too angrily red, you should keep an eye out for an opportunity to feed. Thankfully, managing this isn’t too much of a challenge.

I’m not sure I’m a big fan of just how interactive the game is, though. So many of the decisions are either superficial, or have only immediate impact, and I generally prefer with my visual novels that decisions be meaningful. What’s more, the vampire powers are completely arbitrary. They show up as an option when you want to use them, but they’re also never introduced, nor is there any way to check what skills you have, and there’s no way to level them up, become better at them, focus your energies on them, or otherwise engage with them. Each time they’re simply a dialogue option, but with a little symbol next to them to suggest that you really should be using that one.

In the end Coteries of New York feels a little conflicted between whether it wants to be a story-driven RPG, or a proper visual novel, and that confusion delivers a game that’s not as refined as it should be at either. To contrast to World of Horror, another pen-and-paper RPG-inspired story-driven game, there’s a far greater cohesiveness to the narrative and mechanical rules that World of Horror behaves to, and it feels like the more complete game for it. Coteries of New York has the art and general narrative arcs down to make for something truly compelling. It just fell at that last hurdle – the attention to detail and mechanical structure. 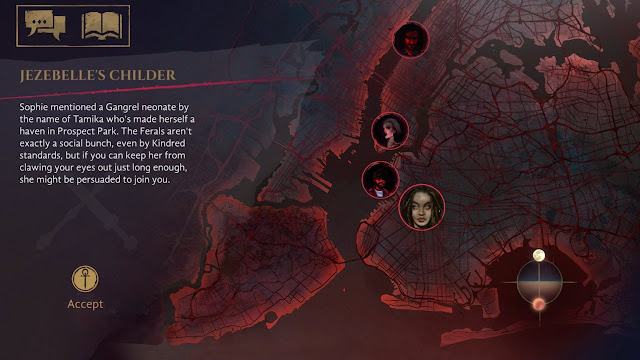 Coteries of New York does a good job being a Vampire: The Masquerade game. The developers have captured the essence of the property, crafted an appropriate aesthetic and narrative environment, and avoided any inclination to try and “change” what Vampire: The Masquerade is. Playing this game feels every bit like playing the tabletop pen-and-paper experience with a good GM weaving the story. Sadly, by nature pen-and-paper RPGs are about fun stories rather than anything meaningful, and Coteries of New York doesn’t really have anything meaningful to say. Throw in some confused mechanics and this one won’t be remembered as a classic of the genre.