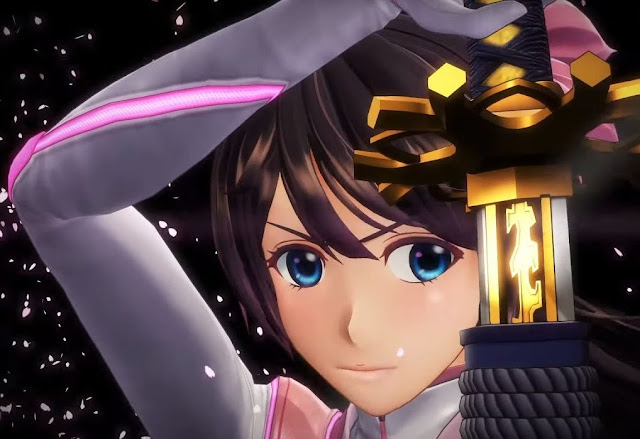 As we hadn’t really seen the Sakura Wars series in the west, with just the one title localised in a very primitive fashion by NISA. So, despite this being huge in Japan, I went into this new release raw, and not really being sure what to expect. SEGA is characterising it as something as a reboot for the property, which has been big in Japan for decades, but most of us wouldn’t be aware of that, making this the perfect starting point for us. What I was expecting was some kind of JRPG/romance hybrid, especially since it looks like a big-budget take on a similar aesthetic to Nihon Falcom’s recent titles (Trails of Cold Steel, Ys). What I got was something much more original than that, and appealingly so.

Sakura Wars is a big-budget visual novel with some Dynasty Warriors-like combat sequences. Unlike more budget visual novels, this one features full animation and while the narrative is linear and locked to specific conversations and events, players can explore a rendering of Taisho-era Tokyo as they play. The Warriors-like action is really there to break up the talky bits (rather than the other way around), and puttering along under the surface is a romance system, where you need to woo a harem’s worth of pretty girls by saying the right things and not being too lecherous, too often. Unfortunately, thanks to the fan service being of the “dialed up to 11” kind, it’s a little too hard to avoid being a perv… but hey, there’s always a second play through to try and do things right.

But first, the narrative. As mentioned, Sakura Wars takes place in Taisho-era Japan. You play as an ex-navy dude who has wound up leading a troupe of badly under-performing young actors, all of whom are also part of a defence force that protects the people of Tokyo from rampaging demons (but they’re bad at that too). Your job is to help guide these girls to stardom on the stage and off… and perhaps also find the love of your life while you’re at it. 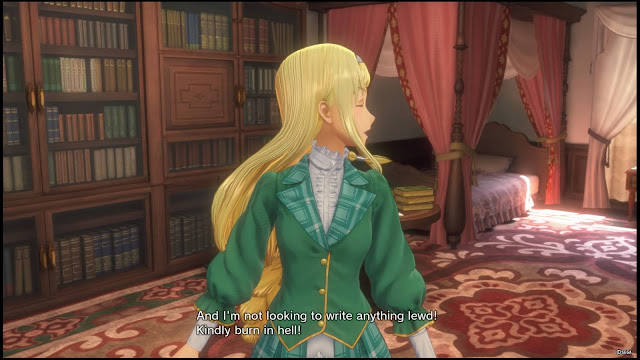 Taisho-era Japan is a highly romantic setting, ideal for this game. The Japanese have a warm nostalgia for this era, which was one of the few bright spots for the country from the time that it was forced to open its boarders by America until it emerged from the devastation of the second World War, and that romantic nostalgia that the Japanese feel for the era is reflected in glamorous approact to Tokyo that we see in Sakura Wars. The game doesn’t have the budget of a Final Fantasy VII Remake, sure, but it makes up for that through its warm character design, gorgeous period costumes, steampunk robots which serve to give it a fantasy edge, and elegant soundtrack that plays memorably in the background. While I do think there have already been games released this year that have a more expansive approach to their aesthetics, I’d be hard-pressed to think of a game that is more beautiful that Sakura Wars, and ultimately that’s what’s important with aesthetics.

There’s a lot of interaction that needs to be managed. Because Sakura Wars does have romance subtext, you will frequently be asked to provide an answer to a question or situation, and depending on how you respond to the two or three options, your relationship with the girl in question will either improve of drop… sometimes significantly. Sometimes those decisions have obvious outcomes (yes, if a girl’s wearing a really tiny skirt but standing high on a ladder to reach a book, you really should avert your eyes), and at other times the “right” and “wrong” decisions are based on the girl’s personality, and requires some interpretation on your part. As there are only a couple of choices it’s a system that’s never too onerous, but the girls can get very doe-eyed and make you feel pretty terrible for some of the decisions that you make.

Most dangerous of all is the bath. Because just about every game and anime that features fan service has a bath scene, so too does Sakura Wars. I often see people surprised by this willingness by Japanese artists to use this trope, though it’s worth remembering that in Japan people tend to have a more relaxed attitude towards nudity (and, indeed, do still use public baths with one another), so accidentally barging in on someone in a bath has less sinister implications in Japanese culture than it does to most of us in the west, and is meant to be taken in a more lighthearted manner than we often interpret it through our cultural lens. With that being said even by genre conventions Sakura Wars’ bath scenes do tend to come across as pervy, and the presence of the bath itself seems to hold little value to the plot other than to set up these scenes. These are the most extreme moments that the game gets up to with its fan service, though the general sentiment that runs through Sakura Wars is such that you’ll need to have a tolerance for frequent mild fan service as well in order to enjoy the overall game. 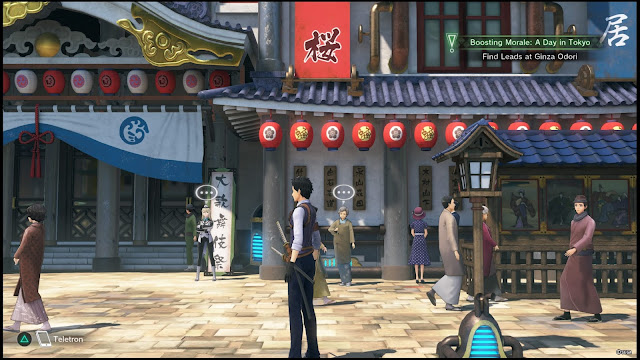 The cast of characters are all great, though, and you’re given plenty of time to get to know them all. From the sweet & naive Sakura to the bookish Claris, to the huge-boobed diva Anastasia and the ninja girl, Azami, each girl has a full narrative arc in which you’ll learn they each have often surprising insecurities and weaknesses, and your job in unlocking their potential both on the acting stage and battlefield is to help them overcome these personal demons. Characters that you don’t like at first will become incredibly sympathetic, and it’s the little moments of reflection with each where the writing really shines. For example, there’s a moment where Anastasia starts stargazing at night wistfully – a moment of weakness for a woman that is usually so composed and coolly professional. Your protagonist sits next to her and starts counting stars, and, after delivering an emotive speech, Anastasia turns to him to discover that he’s still counting, completely oblivious to her. As dumb as it paints the protagonist, it succeeds in cheering Anastasia up, and this scene is delivered with just the right subtlety to really drive home its warmth.

Indeed, performances across the board are spectacular. Voice actors inject real personality into their characters, and key scenes – which are fully animated as 2D anime – are indistinguishable to any other good anime you might have seen. The game does show its budget in that there are many scenes that are not voiced, with the developers clearly aiming narrow with voice actors to make the key scenes memorable, but once you’ve got the voices of the characters in your head it’s not hard to imagine the dialogue as spoken anyway.

I’ve spent a lot of time in this review talking about anything but the combat, but that is because it really is very secondary to the narrative and character interactions. When battle does break out, you’ll be able to command a couple of the heroes, and need to make use of weak, strong, and super attacks against large hordes of enemies, much like you’d expect to from one of Koei Tecmo’s Dynasty Warriors titles. A couple of things hold this combat system down. Firstly, and most critically, the camera system isn’t great at dealing with hordes of enemies coming in from all angles. The development team should have taken inspiration from the Warriors series and provided a snappier “snap camera behind character instantly” button – it’s there, but it’s not quite as responsive as it needed to be. Secondly the combat system lacks the fluidity of other modern action games, making it feel clunky and archaic to play. Boss battles tend to involve irritating attack patterns that can keep you in a defenseless state for too long, and the dodge button doesn’t cancel existing animations, meaning that, in the heat of the battle, you can’t smoothly transition to defence. Given that the game features a Bayonetta-like slow motion reward for successfully timing a dodge, the clumsy execution of the dodge button needed to be far more precise. 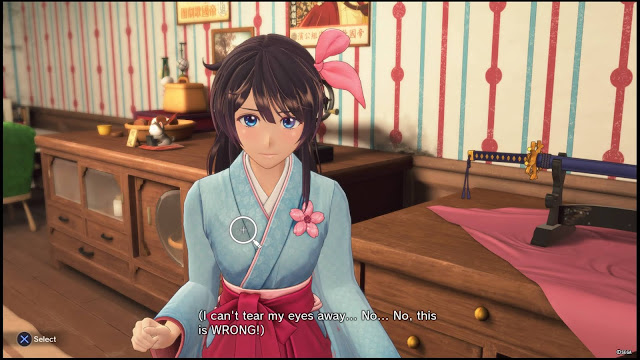 With all of that said, the combat system is a fine diversion to the otherwise sedate pacing of the storytelling. Sakura Wars’ narrative needed to linger over characters and events to build the romance, and tends to be more slowly paced than most visual novels. Every time a combat scene comes up it is most welcome indeed as a diversion for a few minutes. The same can be said about the Hanafuda Koi-Koi “mini game”, which has enough opponents and challenge curve to be a full game in its own right. If you’ve not yet learned how to play Koi Koi, then this is the solution because not only is it clear in teaching you the ruleset, but it’s also presented in the most gorgeous way. The only disappointment is that given the way that it is presented (you’re been invited to play one-on-one in the girls’ private space) it’s a bit of a pity that it’s a gambling game for coins rather than strip Koi-Koi… wait, I’ve been watching too many of those bath scenes, haven’t I?

Digression aside, Sakura Wars was a surprise. From all the promotional material SEGA would have you believe it’s some kind of action JRPG hybrid, but the combat stuff turns out to be its weakest element. It’s not bad, but it’s also not where the magic happens. No, what this game does quite beautifully is the character development and romance. From the perviest moments of fan service through to the most heart-wrenching moments of insecurity that each of the characters displays, Sakura Wars is by turns hilarious and touching, and covers a real emotional gamut. Whether you call it a blockbuster visual novel or an interactive anime, it’s a rare thing for a game as niche as this to be done to such substantial production standards and then enjoy a full localisation. SEGA took a risk localising this after many years of popularity in Japan. Hopefully it pays off, and we see more localisations from this series into the future.