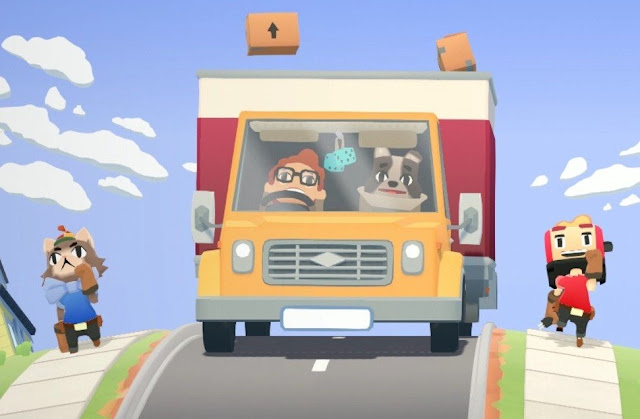 Moving Out is the latest title by the Sydney-based SMG Studios, the same team that has recently made a name for itself developing party hits such as Death Squared and Super One More Jump. It’s the latest entry in a genre of chaotic party games masquerading as dreary household chore. Moving house is a task which I’m confident no person actually enjoys in real life, which is why it’s particularly cathartic to see it sent up as one of the rowdiest co-operative action games I’ve seen in a while. This is a game which is frenetic and hilarious, but also holds a surprising degree of strategy under its admittedly puerile veneer. If you’ve already got a group of friends to play party games with, Moving Out will be right up your alley.

The game’s strength is that it is immediately understandable and accessible. Players move with the joystick, pick things up with a trigger, and slap/throw with the Y button. The fact that there is a dedicated button to slap things really shows what kind of game this is already. Each level features an assortment of furniture in a top-down house, which will need to get transported to a moving truck somehow; and how you do it is very much up to you. The accessibility options are enhanced through a robust Assist Mode, which allows for player customisation of nearly every mechanic the game has on offer. This is clearly a title which wants you to enjoy it on your own terms – and there’s thankfully no barriers of entry here.

Once players have the bearings of the game, they’ll soon find that Moving Out’s houses operate on their own interesting set of logical rules. It’s a given that the most obvious way to solve a level is probably also the most inefficient – moving everything out the front door, starting with the heaviest stuff, will only earn a silver medal at best. Those aiming for the best times will need to think outside the box – use teammates to form supply chains, figure out the layout of the map and minimise the amount of superfluous running from one end to another. The handy throw options will ensure that everything including the kitchen sink makes it to the moving truck while getting at least some degree of air. Double beds are finicky to get through a door, but with a little help from a friend you’ll easily get that piece of furniture gracefully sailing out of a second story window. 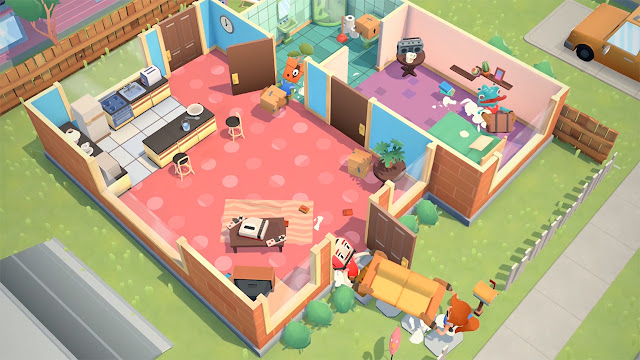 This is to say that victory in Moving Out often overlaps with creating the greatest amount of chaos, and this is one of the game’s biggest successes. Nearly everything in this game’s various houses is destructible, and most have delightful animations for when they break. Vases, windows, doors and railings shatter effortlessly at the touch of our clumsy protagonists, so it’s good that players often won’t get penalised for their disregard of their environment at all. Often the loading screen will even joke that, because the movers have insurance, the players should feel free to break as much as possible. Only a occasional stretch goal will encourage teams to have some more caution, and leave very specific aspects of a house unbroken.

Moving Out is a surprisingly lengthy game, with a vast variety of houses and level types. I particularly enjoyed just how many interesting gimmicks the developers managed to create out of the theme of house-moving: each level tended to bring two or more new ideas to the table, which meant that play sessions often felt fresh and rarely devolved into tedium. While in one level I was tossing fragile boxes over pools of deep water hoping a teammate would catch them, in other levels I was corralling chickens and sheep who could get away from me by slipping through gaps in the level geometry. A realistic job simulator this is not, but the novel aspects of the level design go a long way into improving Moving Out’s immediate appeal with both the more causal and more serious player.

It also helps that the game’s sense of humour exudes from every aspect of the design. In addition to the very silly gameplay, each level is prefaced with a theme and a dialogue snippet which often had me chuckling. The playable characters are also appropriately ridiculous (my favourite being a toaster-head that shot bread everywhere around the map) and their ongoing unlocks kept me interested in whom I could find next. It’s the little details peppered across Moving Out that show this game is a labour of love, rather than a cash in which some party games can tend to be. The developers are earnestly trying to make the player smile at every facet of the game’s design, and I’m happy to say that more often than not, they succeed. 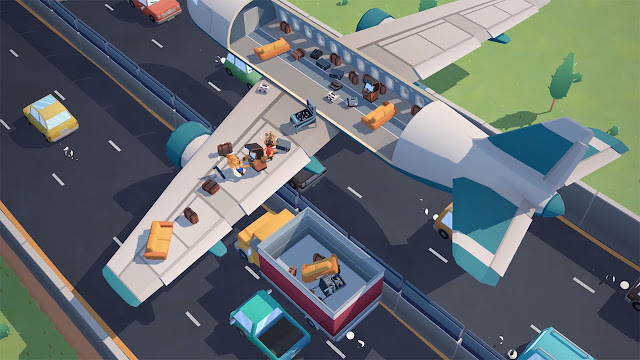 It goes without saying that Moving Out works best when played with friends. Local multiplayer is all that there is on offer – there’s no online play in sight, and it’s an understandable choice that the developers have made. Communication is key, and there’s no way that emotes or voice chat could substitute the frenetic shouting across a couch necessary for full enjoyment of a game like this. This does mean that Moving Out is a disappointing experience when played solo. To their credit, the developers did add a variety of options to make solo play non-excruciating, including an assist mode that makes 2-player objects like beds or sofas very light, as well as an option to control two characters at once. Although I really wouldn’t recommend it, it is technically possible to beat the entire game solo. But this lonely playthrough would only reveal that at its core, Moving Out’s mechanics are actually quite tedious, maybe even a little annoying. It’s only when the right players join in together that these mvoments start to pop, and laughter can cover up gameplay that’s designed to irk players.

Moving Out is a simple game with an easy to understand premise, and even without its superficial similarities to games like Overcooked, it’s likely to be welcomed warmly by any couch of friends. SMG Studios has designed an interesting set of challenges for teams to tackle, textured with interesting gameplay gimmicks that are just as likely to elicit a groan as they are a chuckle. It’s been a long time since I’ve been able to share a game like this, which is just so effortlessly fun in every facet of its design.