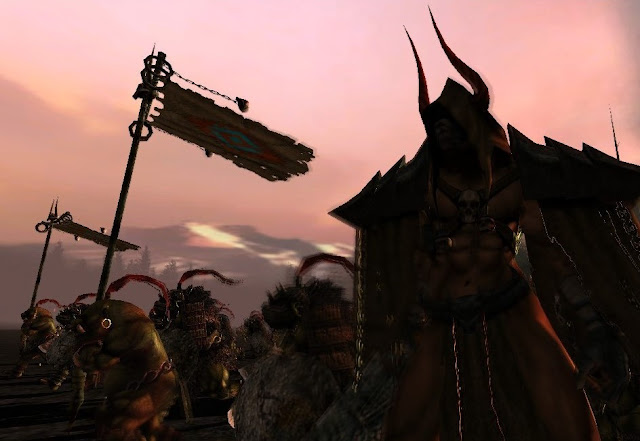 There was once a reason to buy into Xbox consoles if you were a fan of games from Asia. Not now, but once. The original model Xbox and Xbox 360 both enjoyed a surprisingly decent range of titles that were exclusive to those platforms. Kingdom Under Fire: The Crusaders, for example. It was one of the best things available on that original model Xbox, and now, finally, you can play it again without having to dust the console off.

Forget the patchy Kingdom Under Fire 2, which has been in development forever and keeps alternating between trying to be a free-to-play and a premium title. Back with The Crusaders, Korean developer, Blueside, had a strong vision and a razor-sharp focus on how to deliver on that vision. This game is a hardcore, challenging, real time strategy game, in which you not only need to command an entire army, but you can drop in and take direct command of your unit leader for some Dynasty Warriors-style brawling. All of that to the tune of a hard metal soundtrack that gives DOOM a run for its money. The engine is showing its age now, but the vision is not – this is a gritty and grimy – but also beautiful little masterpiece.

In some ways it feels like a modern take on the classic Microprose Warhammer titles. You take control of a number of units, each of which will gain experience and power as they fight in battles. You can also recruit new units at points, and pretty soon your army is made up of a patchwork of infantry, cavalry, shock and ranged troops, drawn from a nicely broad range of different races and types. You line them up on the battlefield and then try to out-maneuver your opponents, mixing special skills and abilities with a fairly standard rock-paper-scissors application where some units have advantages over some unit types, but weaknesses against others. 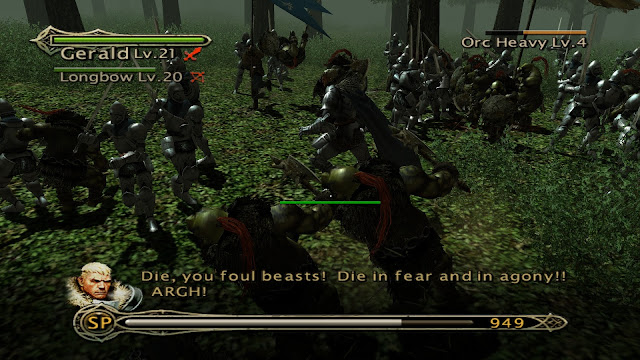 You can also control formation widths, gain an advantage by attacking when the sun is at your back (blinding your opponents) and, as mentioned, jump down into battle to take direct control of the general. There’s a good reason to do this, because if you can hunt down the enemy leader and kill them quickly, the entire enemy unit dissipates, saving you time and potential damage to your unit. Of course, actually tracking down the leader in the whirlwind melee can be difficult, but it’s important that you learn how to do that early on.

The grand sum of all of this is that there’s a lot going on in Kingdom Under Fire, and this can be a very demanding game indeed. I had a devil of a time with it back on the Xbox, and while I’m a fair bit better at action games now thanks to Dynasty Warriors and Samurai Warriors (it was always the direct control melee that got me), Crusaders still has a willingness to punish mistakes and poor army management. That’s by no means a criticism, though. It would be disappointing if this hard rocking metal medieval fantasy didn’t back its tone up with some hardcore action.

What makes the game truly special is the way it creates the sensation of a truly epic adventure. The first few missions are modest enough, both in scale and the type of units that you control, but the rich upgrade tree, the special units (giant scorpions, dragons, the works) and the length of the battles themselves (you could be looking at a half hour or longer at times) all conspire to give the game a sense of major scale warfare and world-shattering events. You don’t have much control over how the narrative plays out, as you’re following a linear path of battles, but thanks to the challenge of those battles, and the depth of customisation you’ll feel an ownership over the narrative nonetheless. The only real issue is that sometimes the developers decided to throw missions that involve stealth and other alternatives into the mix, and when Kingdom Under Fire stops being about grand scope armies clashing with one another, it tends to lose its mystique a little. 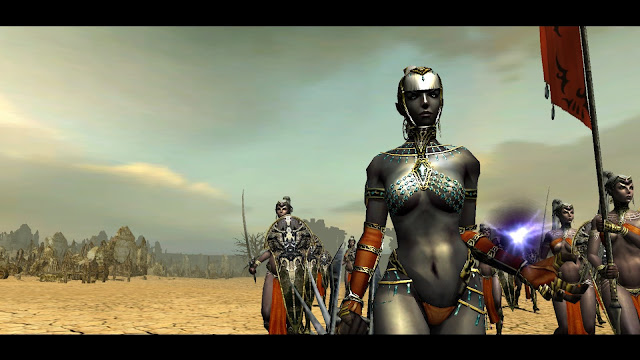 Not much has changed for the release of Kingdom Under Fire on PC. It now plays in widescreen, as you would expect, and the visuals have been upscaled to suit HD screens. It’s not an overly pleasant look, as character models are as blocky and primitive as you’d expect for something from 2004, but it does achieve two things – firstly it does make hunting down the leader of an enemy unit for one-on-one combat a little easier than it used to be, because everything’s clearer now. Secondly, it makes the fetishistic bikini armour that many of the game’s female characters wear hilarious. Truly if there’s one area where graphics have only recently hit a minimum standard to deliver something worthwhile, it’s in the rendering of sexy characters, and Kingdom Under Fire’s effort is so over-the-top ridiculous for the technology available that the improved resolution just makes it all the more amusing. You can also play with mouse & keyboard, though ironically, given that this is a RTS, the melee combat side of things make the standard controller the vastly superior option.

It’s great to have a “real” Kingdom Under Fire game playable on modern platforms. I know Blueside has had all kinds of issues with sustaining and modernising this series, but everyone really should experience the original. With Kingdom Under Fire: The Crusaders there was real potential that this series could have gone on to something big. As it is, though it’s shaping up more as a bit of flash in the pan brilliance that will likely not be replicated.

Review code was supplied by publisher.

Dead or Alive 6 update: Tamaki joins the roster, and this girl rocks