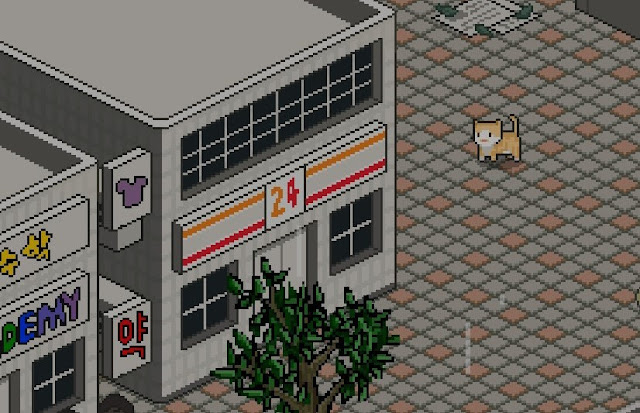 It has to be a tough life to be a street cat. Scavenging around for rubbish and often only able to eat by the good graces of humanity – the same species whose behaviour is the underlying cause of why most street cats are out there – no, it’s not a pleasant life. A Street Cat’s Tale tries to make a cute and charming story of survival out of such circumstances… but unfortunately it comes off as all a little aimless in execution.

It’s a horrible, sad start to this game, as a kitten (your avatar) watches their mother get run over by a car and left for dead. The cat’s potentially saved after it is carted off to a vet, but you’re left on the streets to fend for yourself. You do find a little cardboard box to sleep on, but it doesn’t take long for starvation to set in. From there, you need to wander around town, digging through trashcans for leftovers and banana peels, and then either consuming those to keep your energy up, gifting them to the other denizens of the neighbourhood to improve your friendship levels with them, or exchanging them with a local alley cat for house upgrades.

You wander around town “talking” to cats and dogs, and sucking up to humans (who you won’t understand until you’ve obtained a certain “friendship” level with them, at which point you suddenly will). It’s a trail-and-breadcrumbs deal with results to follow a narrative that… really doesn’t go anywhere. Characters have two or three lines of dialogue, which is barely enough to characterise them as broad caricatures, let alone create the kind of rich characterisation this game needed. There’s “the bad boss cat”, the “stupid dog,” and “the cat-obsessed human,” as well as a half dozen other character-types (not characters), and that’s really all these is to these characters, in what is meant to be principally a game about forming social bonds with those around you to help survive. 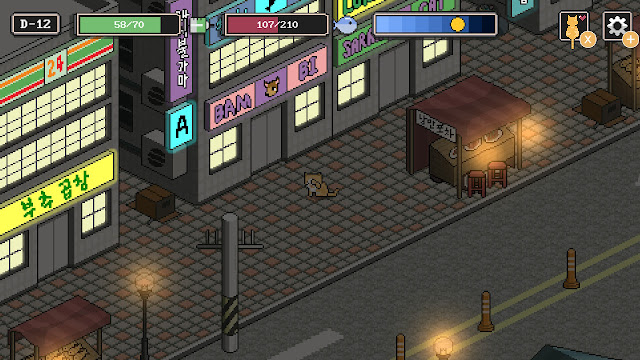 The world of A Street Cat’s Tale also lacks personality. Initially the pixel art seems bright and cheerful enough, but not much is actually done with it, and as a result it doesn’t really do much beyond existing. Your cat roams the town but doesn’t have much more than a stilted animation, and the other characters around town are stationary, popping in and out as the day/night cycle demands. The only thing around town that really moves is the cars that zip around the street and hurt you if they run into you (and yet move at such a pace from off-screen that it’s almost impossible to avoid being “hit” sometimes). It doesn’t make for a particularly charming or interesting world to roam.

Yet “roaming” is all that A Street Cat’s Tale offers. Mission structure is almost exclusively “find X item because Y character wants it, and build that relationship to Z ranking so they’ll give you the next mission”. It’s more frustrating process than it needed to be thanks to the random nature in which items drop, so most of the game involves digging through every pile of trash for the one specific item that the next character wants, and consuming the rest in order to keep your cat alive. Couple that with a slow movement pace for the cat – but a fast rate in which hunger declines – and you wouldn’t have time to do much more in A Street Cat’s Tale than scavenge, even if there was something to do. Yes, I do realise that real street cats also don’t really get the luxury of stretching out on a warm bed and sleeping the day away either, but perhaps the developers should have realised that this disqualifies the life of a street cat as something worth simulating in a video game.

I rarely write reviews this brief, but there’s really not much else that can be said about A Street Cat’s Tale. There was plenty of potential here to give players a grand adventure and a chance to see the world from the eyes of a cat. It could have also been an opportunity to explore just how poorly humanity can treat animals. Sadly, the game doesn’t deal with any of that and there’s simply nothing to sink your teeth into with this game as a consequence.