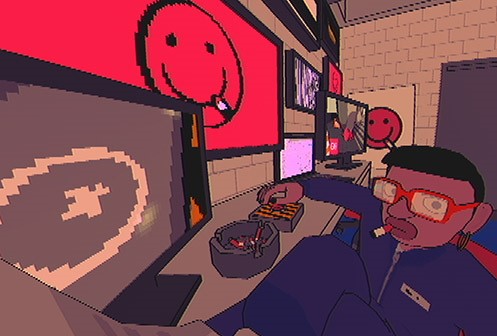 Announced last week, Sludge Life is yet another in the unending parade of quirky, different games that we’re seeing published by Devolver Digital this year. This one is coming to PC and Nintendo Switch, and is a very silly (by design) open world graffiti-tagging game that embraces everything from sociopolitical discourse to toilet humour.

I had the opportunity to fire of a couple of quick-fire questions of the development team’s lead writer, composer and designer, doseone. On the back of announcing it last week, he was understandably busy, but you’ll get a good sense of the tone and direction this game is aiming for through these answers:

Matt S: Where did the tone for this game come from? It seems clear to me that you wanted to look at the current socio-political climate so am I right in guessing that Banksy’s good work hit a chord?
doseone: All the socio-political aspects are more an anchor for all the humour and context, not really the yolk within Sludge Life’s egg. Banksy is my favorite Athlete!


Matt S: Graffiti is a highly subversive thing… is the game going to highlight other forms of social subversion?
doseone: Terri (Sludge Life’s co-creator) and I both share GRAF as a gateway experience that led to our overall aesthetics and artistry. And this game is a homage to that, but there’s more to vandalism than meets the eye, so we tried to get a bit of every “why” there is for tagging in the game.

Matt S: It also seems like the game’s going to indulge a lot of low-brow humour. Literally toilet humour at times. Was there a reason you went in this direction?
doseone: We tried to balance the potty with the profound, for every body function funny moment in Sludge Life we have and equal yet opposite poetic moment… And for what it’s worth coming up with an original poop koke takes all the focus and fury creative writing can muster!

Matt S: Why aim for open world design? Isn’t that a particularly difficult thing for indies to achieve (without the game filling with a ridiculous number of bugs)?
doeseone: I told Terri to just make the game a Hallway, but he wouldn’t listen! For me filling a digital world with feels and humour and earnest is actually my favorite part of the process – the more open the world the deeper the immersion.

Matt S: I hope the game’s a big success – it certainly seems oddball enough that it deserves to stand out. What are the key takeaways that you hope players bring from their time playing the game?
doesone: Sludge Life is driven by the player’s curiosity, and our job was to litter it with enough curious creatures, peoples, and problems to make that curiosity creep out of as many people as possible.