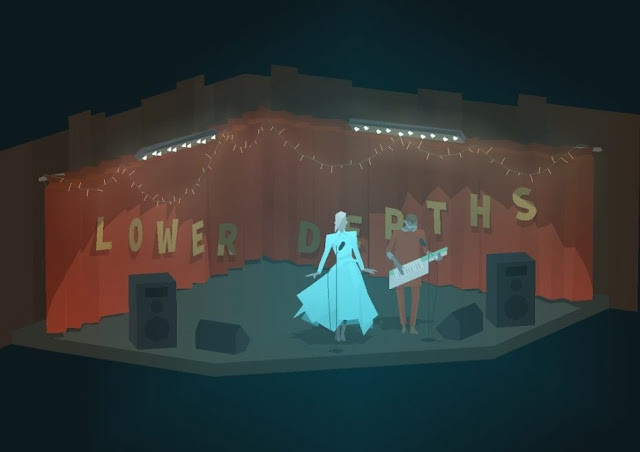 It took me far, far too long to start playing Kentucky Route Zero. It’s one of those things that people have kept recommending to me, knowing the kinds of games that I like to play, but I had just never got around to it.

I’m only about halfway through now, having finally bit the bullet and bought it on Nintendo Switch, and it is absolutely brilliant, and everyone who had recommended it to me got it right: this is very much the kind of game that I like to play. Kentucky Route Zero feels more like a fawning love letter and homage to theatre than a “game” by the traditional definition. The narrative plays out with the unique pacing and rhythm of live theatre (plays are written differently to cinema and do “sound” different as a consequence). At least one of the side stories between chapters – the one I’ve played so far – is explicitly a theatre play, complete with a modeled audience in the back, and a static stage with lights dimming between acts. This is exactly what makes Kentucky Route Zero quite unique, and playing the game has been almost depressing at times because it should not be unique.

The video game industry has been very good at pulling ideas from other popular artistic mediums. There are innumerable games based on Hollywood blockbuster film and comic books, for example. Over in Japan there’s an entire industry in making games based on popular anime. There are also plenty of games that come from popular literature – Lord of the Rings, Tom Clancy and The Witcher all immediately spring to mind there.

However, the video game industry has traditionally been very (very) poor at pulling inspiration from “high” art. As I sit here to write this, I’ve been thinking really hard and Kentucky Route Zero is the only example I can think of where there’s an explicit effort to “do theatre” in a video game. I’ve only ever heard of one development team that was directly inspired by opera (Chaos Legion, a PlayStation 2 action game published by Capcom), and for all the weight the name “Shakespeare” carries in art circles, I can only think of one contemporary commercial game that’s directly Shakespearean (the satirical Ryan North’s To Be Or Not To Be), and a handful of references and non-commercial or older projects.

Over in the world of visual design, video games has its own art form in pixel art, which is certainly popular, and there’s the realism that larger developers and publishers aim for, but its rare that a game’s visual design comes out of an art gallery or visual art movement.

Video games are a popular medium, of course, and there is the pressure on games to sell well, particularly at the higher end of town. Because of that the capacity for developers to create works in the vision of more niche art forms is limited… particularly when the typical fan of ballet or opera is not likely to be digging around in the weekly releases on Steam or the console stores to keep an eye on every indie and niche new release. With that being said, I’d like to posit that I also believe that this has a lot to do with the game developers themselves.

The reality is that for all the grandiose claims this industry likes to make about how great of an art form video games are, there aren’t that many in the games industry that are deep fans of art. There are more than a few reasons for this. One is the reality that most game developers come from STEM study, which is mandatory for the resume. STEM actively excludes the arts, meaning that any formal education a game developer has had in the arts has been in addition to the bulk of their training. Another reason is practical – the industry is truly infamous for the amount of crunch involved, and when you’re working 40 or more hour weeks, every week, your capacity for attending the opera or art galleries is greatly diminished… particularly when, like most game developers that have risen to senior creative roles, you’ve also got family responsibilities.

To make a game inspired by opera, ballet, Shakespeare, Monet or Picasso, you naturally need to have a deep level of familiarity with the base art, and I would argue that video games are somewhat unique in that the creatives are very insular – outside of the easily digestible pop culture that they’re making their current game around, they’re not that engaged with the arts. A game like Kentucky Route Zero is rare precisely because the number of game developers that read enough theatre to understand its structure, and attend enough theatre to understand its soul, is almost too few to count.

Finally, it must be said that the audience for video games doesn’t cross over that often with other forms of art either. There aren’t that many critics or consumers familiar enough with theatre to analyse Kentucky Route Zero as a work in the theatre tradition. What’s the point of making your game a rich reflection on Shakespeare when most of the deconstruction would be missed by players? And why on earth would you base your game’s visual design around cubism when “good graphics” means either photorealism, or that teen cartoon aesthetic that is in vogue with the likes of Fortnite? The typical “influencer” just wants something that will amuse them and be mainstream enough to keep the subs coming in… and most influencers have absolutely no expertise in the arts to actually treat games as art. To cap it all off, this is not an industry that rewards artists that challenge their players with the unfamiliar. The unfamiliar is “confusing”, and it’s so much easier for a critic or influencer to dismiss that as poor and “pretentious,” and thereby tank the game’s public perception, than it is to become familiar with what the game’s on about.

I actually think we’re past the point where there is any meaningful interest in developing video games as an art form. The industry has pitched its flag and circled its wagons around the mountain of money available in churning out entertaining content. While we’ll continue to have small, experimental games like Kentucky Route Zero, and once every few years there will be the occasional blockbuster that can dare to be different (Death Stranding), it’s hard to see any push to get the leads within game developers to start thinking like artists, rather than product managers.