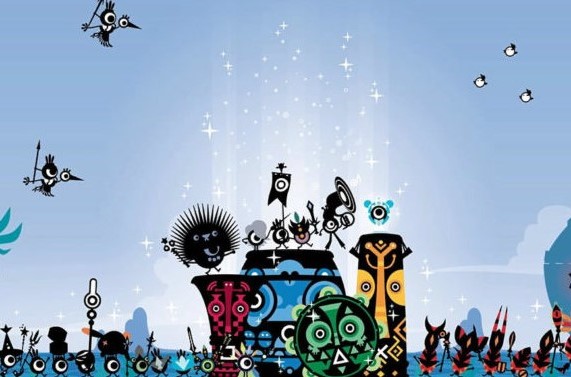 I do wish Sony produced more games like Patapon these days. As a publisher, Sony’s energy and investment have pivoted hard towards the big blockbusters, and given that Spider-Man, Death Stranding, Uncharted and The Last Of Us sell consoles, it’s hard to begrudge the publisher for that. But Sony used to be my favourite for the small little experimental titles like Rain, Puppeteer, Unfinished Swan, Journey and, yes, Patapon, and in playing the remaster of Patapon 2, I was reminded of just how creative Sony’s development teams and publishing arm has been at its best.

Like its predecessor, Patapon 2 is a rhythm game quite unlike anything that has come before or after this series. The core gameplay loop is around tapping out buttons in a specific timing to suit the music, but somehow the game also wraps that mechanic around 2D action-strategy gameplay. It’s a mix that’s almost impossible to understand if you don’t see it in action, but the gist of it is this: you tap out a sequence of button presses in time with the music to get your units of little eyeball-warriors to do things, like “advance”, “attack” or “defend.” Then you need to work out the right application of these commands to go with what is happening on the screen. If a big dragon/dinosaur is about to breathe fire on your team, then you want to put them in a defensive mindset. Once you knock the monster to the ground, you want to go all-out on the attack.

This system creates a really nice sense of ebb-and-flow to the action, with the overall level design being very rhythmic in itself. By successfully inputting these commands to the music over a number of different phases, your team will enter “fever mode,” which makes them all the more effective, and building up a fever mode and then sustaining it throughout an entire level is an immensely rewarding feeling, especially given the primal, earthy tones of the soundtrack. This is one of those rhythm games where the music is absolutely absorbing.


It’s also such a sensory overload with the bold colours and vivid character designs that it’s easy to get carried away, and the biggest challenge in Patapon 2 is yourself. When you come across a giant monster, it can be hard to keep control of yourself and continue to beat out those attacks in rhythm where every instinct from every other action game you’ve ever played would be telling you to mash the buttons as fast as possible. The colours and movement are also so mesmerising that more than once I’ve messed up fever mode by simply forgetting what inputs I wanted to throw in to get my team to shift from defence to attack. There are three difficulty settings in Patapon 2, and on that lowest difficulty setting even people who are not comfortable with rhythm games will be able to get through it, but regardless of the difficulty of the game itself, Patapon’s challenge tends to be a self-imposed one.

It’s such a charm to play, though. Patapon 2 has that rare eye for detail that allows the subtle elements to elevate the overall experience. Every character in the game is imbued with a rich personality, simply in the way that they bounce, bop, and move around the place. As you play on you start unlocking different characters and equipment types, and playing dress ups and mix-and-match with your little soldiers eventually leaves you with a truly eclectic and odd bunch, and it’s fun to play around with these systems just to see the wild combinations you can come up with. Enemies, meanwhile, are somehow both imposingly large, and colourful and charming enough that you’ll feel bad for killing them.

There’s a lot to Patapon 2. I’d almost say too much. The 30 main levels within the game are enough into themselves, but there are all kinds of minigames and side diversions, which only add more to it. You’re looking at a solid 20+ hours of play to get through the whole game, and if I was to have one issue with Patapon 2, it’s that the core game doesn’t really sustain 20+ hours. It’s a brilliant concept, executed to perfection, but getting to the end of that much content is more draining than the play loop deserves. 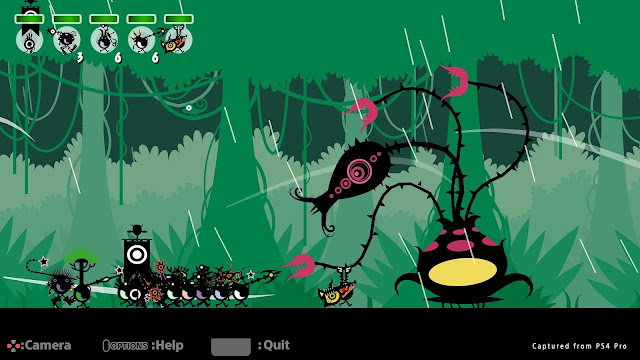 Still, having too much of a good thing is the possibly the most forgivable flaw that hit too many games, and Patapon has the pick-up-and-play vibe going for it, meaning that you can always take a break from it if it starts to become draining. The only other issue with Patapon 2 is that the rhythms will get stuck deep into your brain, and it takes ages to push them out. And then you’ll load up the game again and it’ll be stuck all over again. It’s just that charming, bright, and catchy.