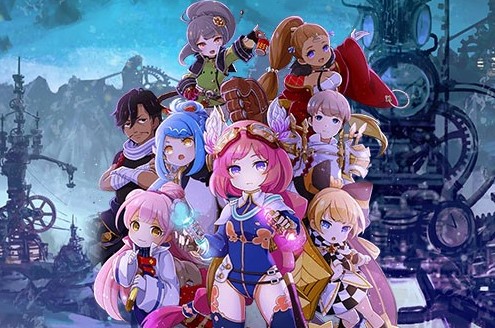 Arc of Alchemist is Idea Factory’s first title for 2020, and there’s a lot to like about it: it’s charming, it respects the player’s time (in fact, at around 15 hours in length it’s one of the briefest JRPGs I’ve played in quite some time), and it has a strong concept. It is a little limited in execution, and won’t be particularly memorable, but it’s a clean, focused, and genuinely interesting JRPG while it’s going.

As the game opens, the world is facing an apocalypse, being driven by a relentless desertification process. Water, food, and other critical resources, are becoming ever more scarce, and the people have a generally nihilistic view on their chances of surviving another generation. Indeed, in sheer desperation, they’ve thrown all their hopes into locating a “Great Miracle” which is prophesied to save humanity.

It’s a game that speaks to so many issues in the real world, but also has a strong thematic resemblance to Gust’s Atelier Dusk trilogy, in which there, too, the world was facing an apocalypse via desertification. Given that Arc of Alchemist has nothing else to do with alchemy, I almost wonder if that’s where the title came from, as a reference to a very different way of looking at an apocalypse to what we’re used to. If you look at the bulk of apocalypse stories in video games, they’re done by western developers, and they are all trying to out-do one another in being the angriest, most violent “homage” to Mad Max that they can be. Those apocalyptic stories are all celebrations of American individualism, as though “take everything, look after your own, f**k the rest” is the natural conclusion to the human condition.


Atelier Dusk – and Arc of Alchemist – have a different view. Here people band together to help one another for the good of all those that are left. The principle enemies of Arc of Alchemist are decrepit machinery of yesteryear, the relics of the past in which humanity exploited the world for their own gains with no thought of living in harmony with it. The protagonists are the heroes struggling to survive those selfish decisions. Arc of Alchemist’s actual plot is quite thin – as I mentioned, the game is only around 15 hours long, and I took a very leisurely journey through it. However, thin as the storytelling is, the thematic parallels to the world we live in today should be immediately obvious. Art naturally reflects the tensions and socio-cultural challenges of the people at the time. I would not be surprised if Gust’s Dusk trilogy, and Arc of Alchemist, are just a start for this kind of narrative.

What’s there is told quite beautifully, too. Part of the emotional impact that this game had on me is the music, I suspect. It’s really quite beautiful stuff, with an eclectic mixture of traditional instruments creating an earthy resonance dominating. But where the music carries the game’s emotional core, the interactions between the characters really give it its charm. Every time you return from the field to home base (for a chance to rest up, shop for new equipment, and invest the resources that you found in building up the base), you’ll be treated to a little cut scene in which the large ensemble cast of characters will natter on with one another. With the main plot being rather serious in tone (particularly by Idea Factory’s standards), these little interactions are used to bring in some comic relief and establish both individual character personalities and the relationships between the various characters. They can be deeply funny. The leader of the group expressing deep anxiety at the performance she’s been roped into performing at a revue was a hilarious on-going joke through much of the adventure. The second-in-command learning that he’s coming on a bit strong in his devotion to the commander a useful reminder that Idea Factory is the same group behind the Hyperdimension Neptunia series, which just loves to indulge anime humour.

It’s those interactions and narrative that help to break up a combat system that is both functional, and a very dense loop that can too-easily come across as a grind. The environments that you get to explore are fairly open, but it’s hard to take more than a few steps without a swarm of enemies popping out in front of you, and the action combat system is both fluid, but far too limited to be long-term engaging. You control one character directly, who has a limited range of attacks, and then rely on the two AI companions to do their thing, and they’re either overwhelmingly competent, to the point that for many basic enemies, you can just let them do the fighting, or overwhelmingly incompetent. Boss battles tend to be difficult simply because your AI helpers get squashed flat in seconds. So you’ll run around, level up a bit, and trounce the bosses. 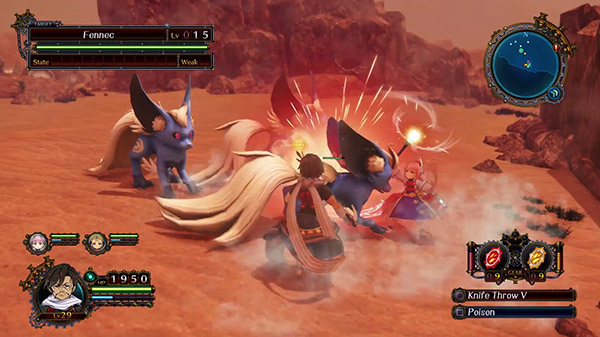 There are some exploration elements in Arc of Alchemist too, but these are better ideas than in execution. You gain access to four “gemstones”, with each representing one of the four elements, and can then use those to deal with environmental hazards. If there’s a block of ice in your way, you melt it with fire. If there’s a rocky cliff that you can’t quite jump up, then create some stone blocks to make a staircase. Unfortunately, these elements are often placed as arbitrary obstacles, don’t tend to make sense in the context of the world, and aren’t really taxing enough to call “puzzles”. A couple of hours in and there’s the sense that those features were there purely to do something to break up the endless combat loop. They’re just not engaging enough to do a good job of that.

Still, because Arc of Alchemist is such a short JRPG, the more draining elements of it don’t end up being exhausting. Because the game moves at such a snappy pace it’s easy to focus on and enjoy its strengths – the narrative and characters. Over the last couple of years Idea Factory has really broadened its horizons. Where once it focused almost exclusively on pervy humour, stuff like Arc of Alchemist show a different side of the studio. It’s creative, different, and interesting, and respects your time so don’t feel like you’ve made some epic commitment just to play through it. I love it.