Metro Redux is coming to the Switch

The Metro Redux saga is set to come to the Nintendo Switch next month, bringing its two titles to the console for the first time. It will contain the games as well as all DLC. Here’s an announcement trailer:

In the series’ universe, the world was devastated by an apocalyptic event in 2013. Several survivors found refuge underneath Moscow. By 2033, and entire generation has been raised underground. You play as Artyom, born just before the event but raised with the others your age underground. You find yourself on a desperate mission to the heart of the Metro system to warn residents of an impending threat. What you find, however, could result in a civil war that will destroy the remnants of humanity.

We know “Neko” means cat, so you bet there’s a cat in Neko Ghost, Jump! The cat, Nekoman, will traverse the land in this puzzle platformer title that will switch between 2D and 3D planes. The game was originally created during a game jam, but a handful of contributing devs along with creator Burgos Games have made it much bigger than that. Here’s the first look, from November:

Nekoman’s friends and family have been kidnapped by Space Pirate Dog Boss. He will have to travel through several biomes, from grassy plains to snowy tundras, in his quest to rescue them. You’ll switch between 2D and 3D planes. Nekoman also has a spirit form to help take out the bad guys.

Neko Ghost, Jump! will be released for PC via Steam, PlayStation 4, and Xbox One sometime this year. I’ve noted the lack of Nintendo Switch on that list, and wonder if that may change.

Trails of Cold Steel III confirmed for a PC launch

18 months have passed since the Erebonian civil war. Rean Schwarzer has graduated from the military academy and become an instructor, now leading a brand new generation of heroes. All is calm in the world, at least for now… the Ouroboros organization is, after all, continuing to weaves its evil plot to launch the continent into war.

Despite being the third in the trilogy, new players will be able to jump in thanks to an interactive introduction to the ongoing story. The combat system has been refine, and new features offer new possibilities in battle.

There’s a new Touhou Project title on the way

It’s not a mainstream title, rather it’s a rhythm puzzle game called Touhou Spell Bubble. The game will combine rhythm elements with bubble-shooting puzzles, and do it all to a background of Touhou music arrangements. 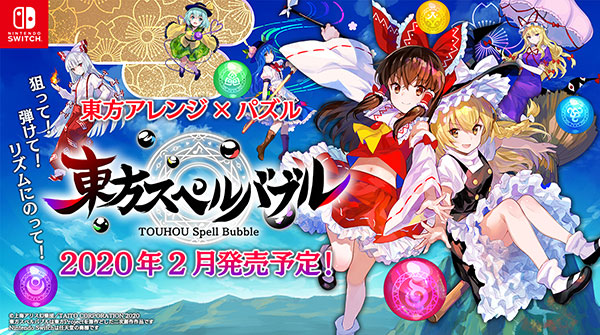 Many characters from the Touhou series are set to appear, such as Reimu Hakurei and Marisa Kirisame. In fact, many of those who work on the series are return, including IOSYS and Yuuhei Satellite for the soundtrack, Taito’s sound team, and illustrators including key visual artist Fuzichoco.

Touhou Spell Bubble will be released in Japan, exclusively for the Nintendo Switch via the eShop, this February.