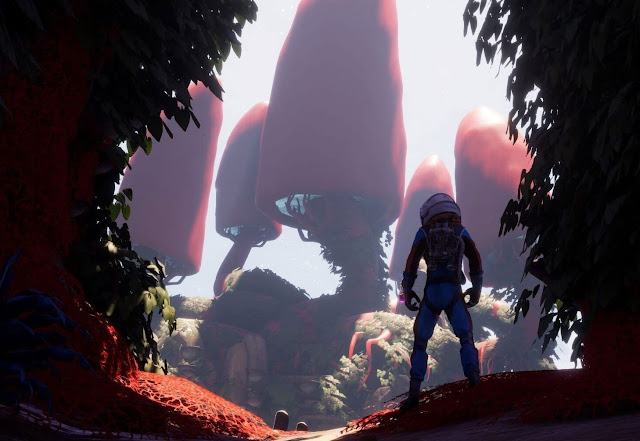 No developer would ever admit to being annoyed that another developer got a game out first, but Journey to the Savage Planet’s developer must surely have seen the release of The Outer Worlds last year and groaned just a little. The two play very differently, but in every other way they’re eerily similar: both feature bright, cartoonish visions of science fiction, and are gorgeous in their embrace of the surreal. Both feature a bitingly satirical view on capitalism run wild. Both are open spaces of wonder. It can’t have been easy for the developers of Journey to the Savage Planet to look back at their game and realise that they’d just thrown themselves into a direct comparison to Obsidian.

Thankfully the games are different in application. Obsidian’s thing is an RPG which closely parallels the wild west cinematic genre. Journey to the Savage Planet is a (somewhat) less violent, more pleasant experience of discovery and journey. One is John Wayne, the other is Charles Darwin, and yet, on the initial impressions it really was difficult to shake the feeling that I was being asked to laugh at many of the same jokes, and explore vibrant visual spaces that had now become familiar. It wasn’t enough to let Journey to the Savage Planet down, but I do feel bad for the team that I may have lost a little of the edge that they were gunning for.

After finishing the game, thinking back to what really stuck with me, it was not the narrative, though. Rather, it was the movement around the space. Journey to the Savage Planet is often artificial. You’ll look up in the sky and see floating platforms just sitting there, which the game gets away with – just – thanks to its surrealistic science fiction vibe, but you’ll know that mechanically those are platforms that are there purely because the level designers wanted to give you some platforming moments. You won’t be able to access them, much less get across them at first, because first you’ve got to explore around the environment to find the right resources and skills that will let you use grappling hooks, double jumps, and all those other movement boots. At first, you can barely climb a waist-high wall.


The thing is, though, once you can start playing on those platforms high in the sky, the exploration is genuinely wonderful. I’m not much of a “Metroidvania” fan, where areas are locked off until you can find the right skills and backtrack your way back, but Journey to the Savage Planet has a real X-factor that makes the experience pristine. Perhaps it’s because areas flow beautifully from one to the next, and there’s the sense that every time you head off in a new direction you’re going to discover something really neat. Traversing around the environment is a real joy, too. Here, the artificiality helps in making it clear what you can do, and once you start zipping around and double jumping high up in the air the sense of mobility is wonderful.

It’s even better when you can work with a friend, and it does feel like many of the challenges in Journey to the Savage Planet – particularly those involving combat – have been designed for co-op play. As with any game about exploration, there is the potential to get lost in Journey to the Savage Planet, and with a generally poor objective market system getting lost can also become frustrating. Having a friend to nut exploration out with makes that process much more enjoyable. Combat, meanwhile, is a little stiff for its own good. It’s not the focus and weaponry is limited, but nonetheless it’s in there and needs to be dealt with, and it’s a real boon if you can tackle the harder battles with someone for this reason.

All in all, Journey to the Savage Planet succeeds in playing so well that I was able to enjoy two things that usually have me dropping the controller – backtracking and platforming. I wanted to keep playing on because the environments were so intriguing, and because I was keen to see how the narrative would play out. Thankfully I was enjoying that stuff, because by the end of Savage Planet I didn’t think much of the narrative at all. I had issues with how The Outer Worlds ultimately felt both heavy-handed and punching down in such a way that it was insulting to the intelligence. But then, I’m a fan of Che Guevara so it still jived with me well, and the reason for that was simple: there were moral choices in the game, and while The Outer Worlds was absolutely desperate to make capitalism a mustache twirling caricature of evil, it did, to its great credit, actually make a point in doing that. 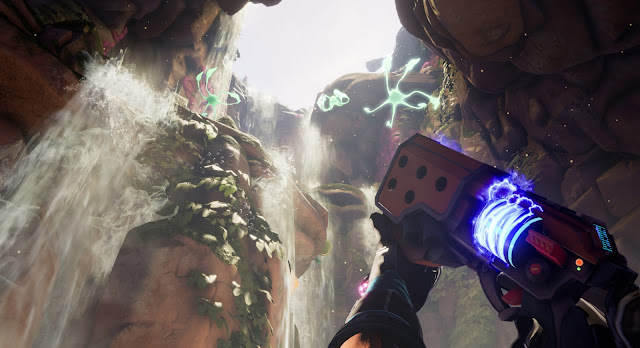 I felt early on that Journey to the Savage Planet might end up being a game that loses sense of its thematic core, and sadly I was right. That’s not to say it lacked for a sense of fun. I kept playing on because every winking joke about capitalism is funny. Every time you return to your ship to indulge a bit of crafting and rest, you are treated to a rolling cycle of live-action “advertisements” that are brilliantly unsubtle in the same way that Paul Verhoeven films are. I was waiting for one of the ads to throw in “I’d buy that for a dollar” just to complete that particular tonal reference. The fun is there.

But as I played on I started to realise certain things; firstly, for an anti-capitalist narrative the game certainly has a soft opinion on colonialism and resource exploitation. By that I mean you’re encouraged right from the start to take (and indeed all your upgrades involve you hunting down resources), and the commentary that plays as you disintegrate harmless animals to break them down into atomic particles comes across as less sharp satire and more a knowing wink of approval. It’s built right into the mechanics, too – side stories and quests are all about collectibles, which, of course, involve taking stuff away from the planet.

There’s also not much of a discussion that goes on at all within the context of the game. The Outer Worlds had it, because you had to keep making decisions. There are no decisions to make in Journey to the Savage Planet, meaning that you’re really railroaded into simply accepting events how they are – yes, we get it, the CEO guy that speaks to you via video logs is an evil guy, and the corporation that constantly buzzes in your ear is about as sympathetic and trustworthy as the voices in that Tom Cruise film, Oblivion. But then you’ll go and do what you’re told anyway, handing the CEO and his company a win with no meaningful consequences. 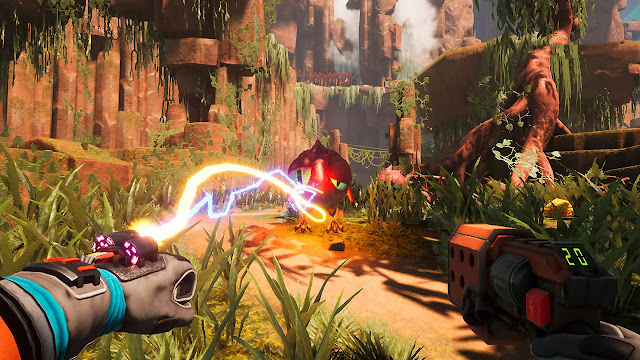 Journey to the Savage Planet ticks all the right boxes. It gets its core play loops right, and it respects the player’s time – you’ll clock it at 15 or so hours if you’re not too concerned with collecting everything along the way. I had a good time in both single player and co-op, and for something that is so foreign to the kind of games I usually play, that this one hooked me in speaks to its X-factor. For all the good, however, the game’s a complete misfire as a narrative experience. It’s frequently funny and well written, but the point it clearly wants to make is often at odds with the point it is actually making, and it’s hard to shake the feeling that the writers aimed for an easy target without actually thinking through the thematic implications of their humour. Still, you’ll get over it. The game’s too pretty and plays too nicely to let the plot get you down. 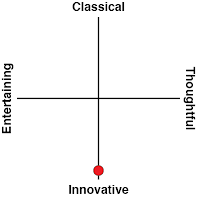