Setting out to make Dark Zelda: Breath of the Souls, and then throwing a dash of Princess Mononoke in there, is certainly a brave and bold move. Portugese-based developer, Amplify Creations, is probably better known within the industry than it is within the gaming community, as it seems to be generally focused on creating game development tools to help other creators (particularly with regards to the visual engines). With that background it should come as little surprise that Decay of Logos is a gorgeous little game (bugs notwithstanding). Sadly everything else about it is terrible.

I’ll start by stating this very simple truism: Dark Souls, or a “clone” thereof, is not easy to make. Not only does the difficulty that is emblematic of a Soulslike require a combat system that is beyond precise and refined, but developers need to come up with sublime bosses that sport interesting and intense attack routines. They also need to create intricate, layered dungeons to explore. And there needs to be a great narrative. People often forget just how effective the narrative is of the better Soulslikes out there, but if it’s a good one, it’s going to have you hanging over every single word and item description for the tiny nuggets of lore that comes with them.

Decay of Logos fails on all fronts. From the narrative perspective, the opening cut scene is of a young elven (or at least, pointed ears) girl who emerges from her burning house to discover that her parents are killed. Thereafter she befriends an elk (hence the Princess Mononoke reference), and embarks on an adventure whereby… her parents and that introduction are not really referenced again. Along the way you can find “echoes”, which work as short chapters of history and lore, but none of it is cohesive in the way that a Souls game is. Eventually you’ll learn what was the cause behind the raid that killed the girl’s parents, but when you think about the gothic majesty that contextualises each Souls game, Decay of Logos just isn’t worth the effort. It’s like the developers tried to emulate the obtuse and non-linear storytelling of FromSoftware’s work without really understanding how to build environments to reinforce the world and lore, and make use of every line of dialogue to help engage players in the world.

So this is what a Z-tier Dark Souls is like #NintendoSwitch pic.twitter.com/jls2P3m1OI

It actually started to annoy me, because I could see in Decay of Logos the potential for so much more. Where Dark Souls had me intrigued with the fascinating names and designs of these brutally powerful bosses that it was asking me to rehearse and, eventually, defeat, Decay of Logos was asking me to fight generic trolls and knights in shining armour. Where Nioh would throw me battles with the amazing creatures of Japanese folklore, Decay of Logos filled my time with the kind of generic world that you’d expect from a bad Dungeons & Dragons campaign. Where Sekiro gave me intricate levels to scamper around, Decay of Logos’ dungeons showed all the creative impetus of a roguelike… and roguelikes have an excuse for their environments to be so bland and repetitive – those levels are randomised.

Combat is the second crucial failing of Decay of Logos. Where I have never had trouble mastering simple concepts like attack distance and arcs in any of the good entries into this genre, I was constantly misjudging distances in this game, and getting hit by routine attacks from routine enemies, even after hours of play. This is partly because of the camera system (which is terrible), partly because simple actions like ducking out of the way are clunky, or sometimes even fail to work at all, and partly because the range on many enemy attacks is poorly visualised. About the only saving grace is that Decay of Logos is one rare Soulslike where grinding gets you everywhere. If you spend a little time grinding away a few levels, the next time you attempt a tough battle, it becomes a cake walk. While that does mean that the game can be finished through brute determination, it also means that Decay of Logos does not provide the satisfying sense of accomplishment that you get from having finally finished any other Souls title.

A third major issue that plagues Decay of Logos is the equipment system, which is truly obnoxious. You can only carry one piece of armour for each part of your character’s body, and three weapons. Your character has no inventory of her own, and mechanically and thematically this is where your companion elk is meant to come in. He carries excess equipment around for you, which is his most useful moment since, aside from a couple of very arbitrary puzzles where you need him to stand on a pressure plate or similar (and which do nothing to build character or tell story), the only other reason he seems to exist is for the cute feeding and cuddling animations… which admittedly Dark Souls does not have. The problem is that this elk is a flighty sort, and will not accompany you into dungeons, boss battles, or anywhere else that’s remotely dangerous. Given how quickly your equipment can be destroyed by enemy attacks… that’s also the moment where you’ll need to be able to swap equipment around. Furthermore, heaven forbid you find a nice new weapon in one of those dungeons, but lack the inventory slot for it. You can either backtrack all the way to the surface, drop a spare weapon off with the elk, and then venture all the way back into the depths… or you have a hard decision to make about what to leave behind. 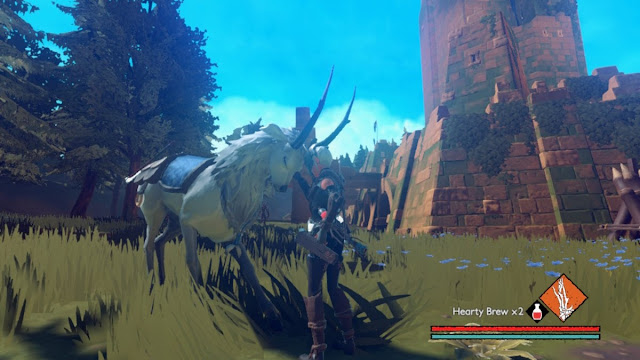 There are some nice ideas in Decay of Logos. Every “Souls” game needs to have some kind of punishment for death and failure, and in most cases you’ll lose any experience points that you’re carrying around. But Decay of Logos doesn’t have that kind of experience system, so that wouldn’t work. Instead, every time your character dies, you lose a percentage of all your statistics, which remain lost until you can find a camp site (which tend to be very far apart) to rest. Even then, when you do so there’s a chance that you’ll be ambushed and need to fend off a horde of enemies in a weakened state.

Related reading: Nioh is the finest soulslike that is currently available. Our review of it here.

I actually love this system, as it does the best job of approximating the way pen and paper RPGs, like Dungeons & Dragons, work to weaken adventurers the further they press on. Attrition is a resource management challenge that leads to a downbeat, gritty adventure, and it’s something that I think other Soulslikes could be doing better given the tone that most of them aim for. Decay of Logos also looks truly gorgeous, and very much in the vein of The Legend of Zelda: Breath of the Wild. The world isn’t quite as large, vibrant, or filled with interesting places to explore, but arriving at a new area was most certainly a highlight of my time in the game.

In fact, of all the bad games that I’ve played in recent years, Decay of Logos was the hardest to put down. It might be that because the AI was so simple that this is effectively the easiest Soulslike, and therefore an almost relaxing way to experience the genre. Or it could well be that those rare moments that work (usually when there’s a wide space between combat) it’s quite the beautiful world and almost something of an indie Zelda or even Shadow of the Colossus in tone and atmosphere. It could just be that this game has a genuine X-factor, because as much as it fails in so many areas, it’s also a genuine attempt by a developer to do something of their own, rather than simply and cynically cash on a popular genre with a mindless pastiche. I’ve played the likes of The Surge and Lords of the Fallen. This game has heart and soul where those two played better, but had no interest in anything other than getting you to open your wallet. In effect, I prefer this, as deeply flawed as it is. 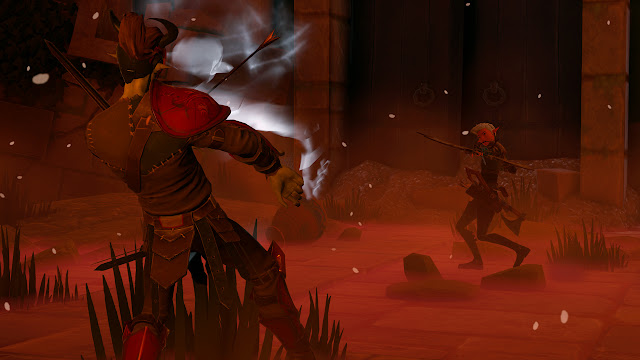 Good intent doesn’t cover for a game this poor though. I would love to see the developers learn from this one and come back with something more, because there is a lot to admire about Decay of Logos. Enough so that I don’t think I’ve ever felt quite as deflated having to give a game a score like this.