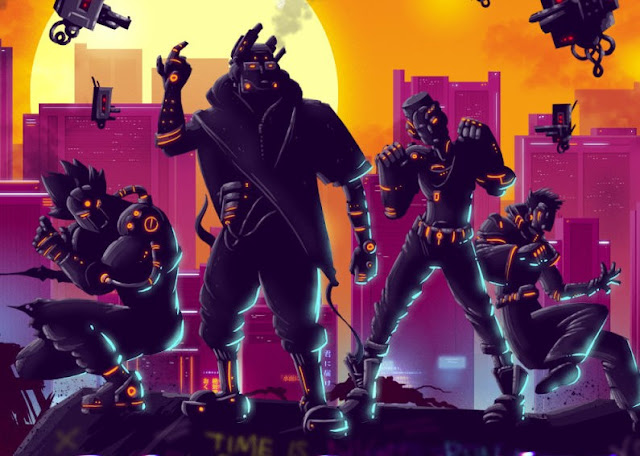 It’s not always fair when a video game – or any other art work, for that matter – belongs to a genre that has become so saturated that it’s hard to muster up enthusiasm for it. It’s often not the game’s fault, in isolation, and many of the best are produced right at the tail end before people get thoroughly sick of them. The AAA-industry has gone through a number of those – think about the MMO, then the FPS. Now it’s the open world. Those are the well-known trends that get done to death. But indies have their own little trends too, and Black Future ’88 is the perfect example of this. This is a game I just could not muster any level of interest in, but it’s not so much the game itself. I’m just thoroughly sick of the indie roguelike.
For those that haven’t been following along, a roguelike is characterised by three distinct traits: firstly, the level design is procedurally generated, meaning that levels and enemies are randomised and every time you play you’ll see something different. Secondly, roguelikes are difficult (to put it lightly), and thirdly, there’s some kind of permanent loss if your character dies. Generally speaking it’s a loss of all equipment that they had obtained while playing, but the particularly sadistic ones will have other ways of penalising players, too. These roguelikes were originally JRPGs in design and scope, but in recent years we’ve seen indies turn the format to everything from platformers to pinball games. Black Future ’88 is just the latest in this long and seemingly endless tradition.
It’s a dual stick shooter blended with 2D platformer, and it does absolutely nothing original with the genre. You’ll enter a room, double jump, shoot, and melee your way through a horde of enemies, and then you’ll be directed on to the next room. Sometimes you can head off in a slightly different direction to find a shop to buy something from, or some other kind of reward, but you can’t take too many detours, because you’re also given a very strict time limit within which to get yourself to the end goal. 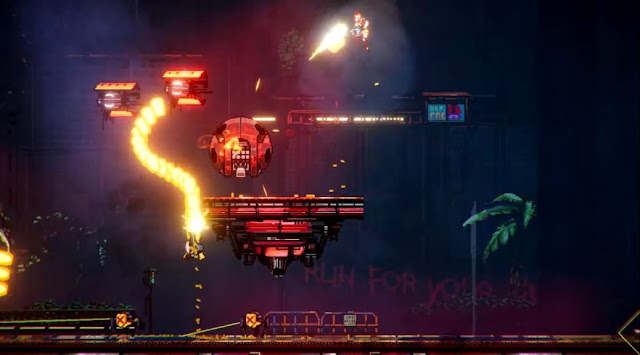 It’s hard. Sadistically hard, at times. Black Future ’88 is quite content to kill your character within a couple of minutes over and over again, while doling out the rewards in a very stingy fashion. Yes, you’ll slowly accumulate experience levels (which are not lost on a death), and these come with better equipment to make the next attempt just a little easier, but your improved ability to survive will be measured in mere seconds. There are a lot of people that will decide to meet this challenge head-on, and Black Future ’88 is impeccably fair. At no stage did I feel like a death was anything other than a result of my poor play, and my character controlled with the most incredibly precise, tight movement. Black Future ’88 is also a very fast-paced game, and as I got into the groove of it I started to feel like the game was almost predicting what I had intended, so accurate and responsive it was to my every nudge.
Nonetheless Black Future ’88 is challenging to the point that you need to be a certain kind of person to derive anything but frustration from it. Worse, there’s no relief from the endlessly brutal gameplay. The neon-noir aesthetic is really cool, but the game does nothing with it. There’s barely a pass at a story, and for all the promises that this game is “Synth-Punk” (it’s a term that is thrown at you within the first ten words of the game’s product listing), there’s nothing really punkish about it. A vague reference to an organisation that you’re resisting doesn’t cut it as “punk”. I’ve been saying for a while now that developers need to understand that “punk” is an ideological position and not an aesthetic, but there are too many games like Black Future ’88 that fail to understand this.
With no real effort put into the narrative, as a player you’re left scrambling to put the game into any kind of context. As a blessing, Black Future ’88 does have some excellent enemy designs, and the boss battles are particularly vivid. They’re also so intense and fast paced that it’s difficult to find a moment to sit back and appreciate them, but they do have a gravitas and their flashy, neon-soaked attack patterns are always mesmerising and almost rhythmical in how they play out. Here too, when the game had the opportunity to give players something to appreciate, Black Future ’88 rips it away in favour of slavishly sticking to the roguelike tradition. The boss battles are also randomised to an extent, which ensures that the game remains difficult (because you’ll never get the chance to replay the same boss battle over and over again to learn that boss), but also ensures that you’ll never learn that boss. Time and time again I felt like I was missing out on some cool narrative ideas in Black Future ’88, because it’s constantly pushed aside in favour of raw gameplay. 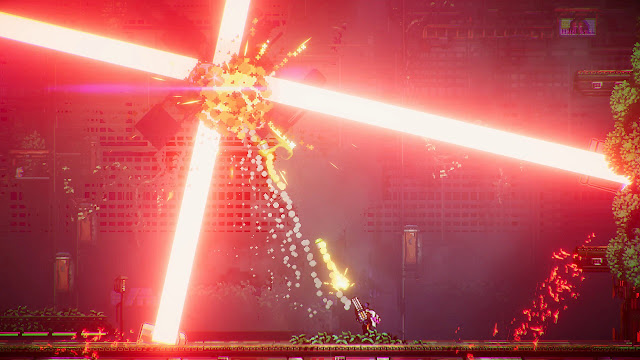 It’s not like I dislike roguelikes. City of Brass (also available on Nintendo Switch) would have to be my favourite “shooter” or all time, and I grew up playing the likes of Shiren the Wanderer and Rogue itself. But like with any genre, a roguelike is only great if it makes something of the genre – is the hard-as-nails permadeath looping mechanic is used to enhance the underlying theme. Nothing about the roguelike suits anything -punk, and so with Black Future ’88 there’s a clash between gameplay, and using the theme as anything more than an aesthetic.

There’s nothing wrong with how Black Future ’88 plays. It’s actually quite exceptional. But there are a lot of exceptional roguelikes and hardcore 2D platformers, and Black Future ’88 lacks the narrative or context that it really needed to stand out against its many competitors.

It’s a massive Black Friday special from your friends at DDNet!