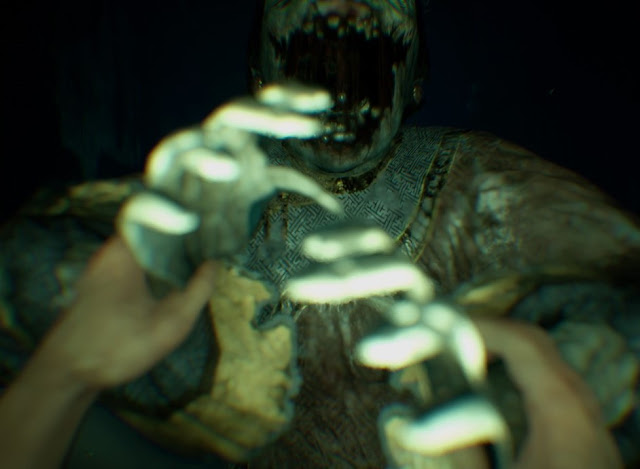 I’m not sure how much Western media knows about Chinese superstitions, because it’s a veritable goldmine for interesting storytelling, and I celebrate any developer with the intention to try to do something with it. Developer Litchi Game is one of the studios making the most of China’s recent lifting of the console ban, and like other games following this trend, ends up with some unique strengths weighted with disappointing setbacks. According to the developer, horror games are not allowed to be published (or I would imagine at the least, are very strongly discouraged) in China. This means that Paper Dolls does not play to the current trends of horror games, leading to some unique mechanics and some areas where some more polish would have worked wonders.

The premise is a little reminiscent of Silent Hill – the protagonist has lost his daughter and wakes up in a mysterious location, beset by malevolent spirits. It’s a very East Asian approach to horror storytelling – the idea that the protagonist winds up in an alternate world for no real fault of their own, where they are tormented by beings that are grounded in unexplainable superstition. Although I’m aware that the gothic is perhaps the most white genre in existence, there’s something palpably gothic about the way Paper Dolls has the player at the mercy of vengeful spirits, and situates the experience into one old, decrepit house.

The game is structured like most adventure games – filled with order of operations puzzles, matching keys to locks and finding scraps of paper for environmental storytelling. The goal is to get the player to walk through the various rooms of the small yet cozy house – players are meant to get used to each of the rooms, their purpose, and the various entrances and exits that connect each room to the rest of the locale. This becomes important later; as the player uncovers more of the game’s secrets, a number of ghosts are unleashed which walk in their own patterns around the rooms and halls, and players will need to craft their path to avoid these ghosts as they go about their sleuthing. 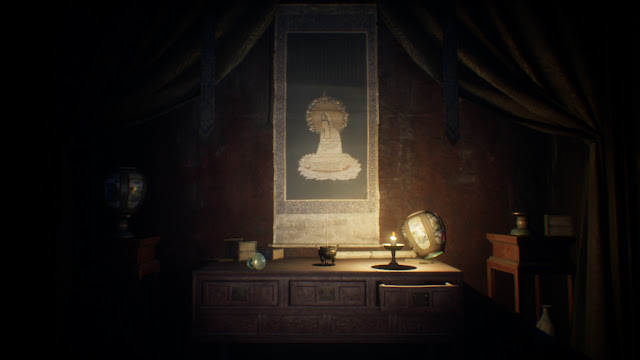 For those not familiar with how ghosts function in Chinese culture, it was believed in Buddhist and Taoist practices that the spirit of a person who was killed in malicious circumstances, or was a particularly sinful person throughout their life, could cling to objects and spaces. Some Chinese festivals and traditions are closely linked with ancestor worship, so that they would pass peacefully to the afterlife and not come back to haunt anyone or anything. Once a ghost was in existence, it would often tie its will into something physical, and can be forced out through a specific ritual. This is all depicted quite clearly in Paper Dolls, and for those fascinated by culture or history, this game does have a lot to offer.

Unfortunately, the intrigue presented in the story does not carry over to the gameplay. The order of operations puzzles are fine, and there are a few quite effective conundrums later in the game. The main frustration players will have is to do with traversal: movement in this game is very slow, and you’ll have to do a lot of back and forth walking. Once the player sees the ghost, they’ll have a brief window to run to cover before they get killed and are sent back to the last time they lit incense in a particular room of the house. That means that players will need to craft pathways between objectives and pass by the incense room whenever possible to avoid losing progress, all while avoiding ghosts whose patterns are not always the easiest to predict.

The other issue is with the game’s use of light. You’ll see in all the screenshots that the game’s rooms are all very dark, and the player can only illuminate a small area with their flashlight. This cleverly hides some of the game’s graphical shortcomings and at least for the first half an hour or so helps to establish tone, but as the game winds on and everything stays so uniformly dark, it’s hard to tell the rooms apart. I definitely get the feeling that if the game was lit well, playthroughs would take half the time and all the tension would be all but gone. It’s even worse if you need to find a particular key or object to advance in the game and you’re not sure where to go: pixel-hunting with the torch is a nuisance, hampered by the slow movement speed and the fact that there might be a ghost right behind you ready to send you packing back to the incense room [Insert joke about how the player will be incensed] (good one, Harv! – ed) 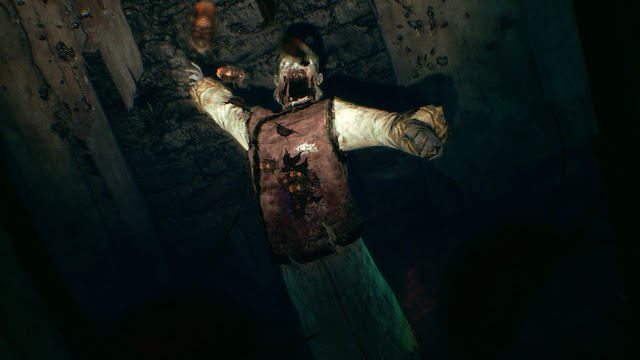 The narrative itself also needs a bit of work. Through scraps of diary entries and some environmental storytelling, players should be able to piece together the lives of the various ghosts haunting the house, and come to understand why each one was cursed. Finding out this information was by far the most interesting aspect of the game for me, and it kept me going even after the arduous mechanics took their toll. The overarching frame about the man searching for his daughter did lack a little context however – an intro cutscene or a scene in the “real world” would have worked wonders here.

As for the scares, the first few times I saw a ghost, the game got me real good. The use of colour, sound and controller vibration are all well thought out for maximum impact. Once a ghost grabs onto you, though, you’ll need to perform a variety of quicktime button presses to get away. This is as immersion-breaking as it sounds. It’s made much worse as the game goes on and the number of ghosts roaming the halls is greater – because the player has no way to fight back, getting spotted by a ghost often just means getting killed, piecing together the knowledge gained about how to advance, and then brute forcing the pathways through the house until you find one that won’t get you killed.

Eastern horror is still unfortunately quite under-explored in the horror genre, so I greatly appreciate what Litchi Game is trying to do with Paper Dolls. The setting and atmosphere, as well as the idea to situate the whole game in a small, interconnected space, are wonderful and lend well to the developers’ overall vision. That being said, the core gameplay loops hold the experience back, and while I loved the Eastern spiritualism theming, there was a lack of emotional weight to the stories of both the protagonist and the ghosts themselves. This is a game which gets me hoping that there is something like it, but better, out there in the future.