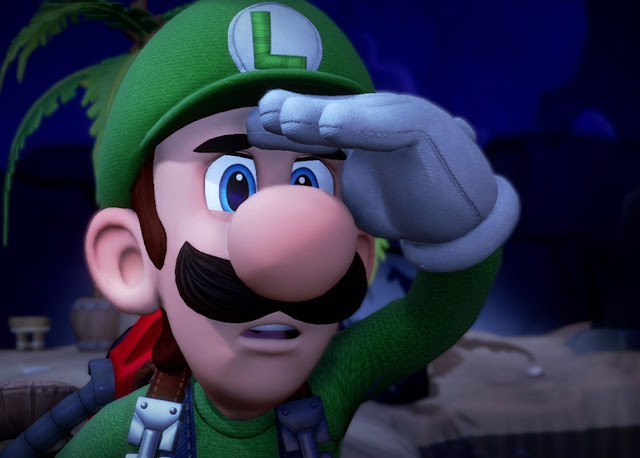 Last week, Sony released a Tim Burton/Danny Elfman-style game for Halloween-themed family fun. The remake of MediEvil was showing the age in the way it played, being a straight-up remake of the PlayStation One original, but it deserved full marks for nailing the aesthetic and tone of Burton’s whimsical approach to horror and Halloween. This week, it’s Nintendo’s turn to try its hand at exactly the same thing, with Luigi’s Mansion 3. What a game this is, too.

This is actually my first go at a Luigi’s Mansion title, and the series has been a blind spot among Nintendo properties for me previously. That is not for a lack of interest though. I grew up with Gremlins and GhostBusters. I love my campy comedy horror as much as the next guy. Furthermore, it’s obvious that Luigi’s the perfect protagonist for it. A bit of a jokey loser character, Luigi’s always been one of my favourites, and the idea of him starring in his own game is highly appealing to me. It’s been pure circumstance that I hadn’t been able to look at a Luigi’s Mansion in the past.

I was in love with Luigi’s Mansion 3 from the opening seconds, as the whole Mario crew rock up to a clearly haunted “hotel” in a clearly haunted bit of countryside, and they’re greeted by the owner, a woman that somehow manages to epitomise every B-grade villainous “host” antagonist in one. There’s bits of everything from Vampira through to Frederick Loren from House on Haunted Hill in her. Complete with an awesome horror hairdo. Then things get even more wild as a very familiar face shows up, and seconds later everything turns to hell as all of the Mario crew (aside from Luigi) are trapped in paintings. It’s up to the scaredy-cat green fellow to vacuum up ghosts as he makes his way through the many levels of the hotel, and the associated classic horror locations that he’ll be frequently transported to. 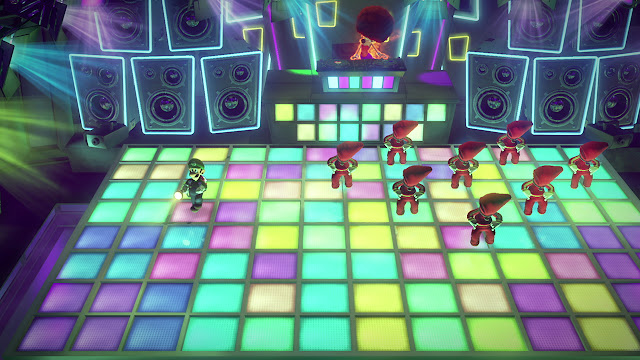 As a side note – you would think Luigi would be quite used to ghosts by now, given how many he has vacuumed up across the series to date. The game even makes direct reference to him having to do everything all over again. And yet, every little bump in the night still makes Luigi jump with the most exaggerated shock and terror you could imagine. It never stops being hilarious and charming, even though Luigi’s Mansion 3 is a reasonably substantial adventure this time around. The sense of humour is all-round charming and self-deprecating – Nintendo even takes a jab at itself with references to the “great and cool” Virtual Boy and how “in” that ugly red graphical style it used was. I love when a company can make fun of itself.

In fact, the humour is pitched perfectly at that space where it’s innocent enough that the youngest of children can have a good time with it without you needing to worry whether they’re being corrupted by it. At the same time, adults are able to chuckle along with the more subtle and wry moments. It’s hard pitching humorous entertainment in such a way that people of all ages can enjoy it equally, and so that parents can watch the material along with their kids without being bored out of their brains. Disney has mastered it at points, but video games rarely have same level of talent working on the scripts. That Nintendo has achieved it here is genuinely impressive, and if for no other reason, Luigi’s Mansion 3 is worth playing for its impeccable standards of humour.

Of course, there’s plenty of other reasons to play Luigi’s Mansion 3. This game is wall-to-wall fun, with an attention to detail that we rarely get in games these days. To describe Luigi’s Mansion in simple terms, it’s an adventure game, where you need to creep around the massive hotel, looking for ways to rescue the Mario crew from the paintings they’re imprisoned in by solving simple environmental puzzles and keeping a close look out for hidden caches of treasure, secret doors, and plenty more besides. The puzzles and environmental challenges are set at a low enough overall difficulty that children will be about to power through with a bit of determination, while maintaining a respect for the player’s intelligence such that adults won’t feel like they’re being dragged through by the nose. Once again, the balancing is supreme. 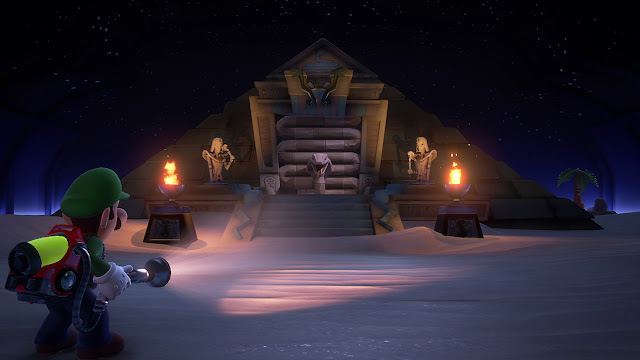 Every so often Luigi will also need to deal with ghosts in one of the most comical combat systems you’ll ever see, and taken straight from GhostBusters. You’ll need to first work yourself into close proximity to the ghosts so you can hoover them up using your vacuum cleaner. Then you need to stun them, so that you can latch on without too much of a struggle. Then it’s time to whip them back and forth, which damages them until finally defeated. At least, that’s at first. Soon enough you’ll also need to blow ghosts away, smash into them, and use a truly impressive range of tricks to take them down. It’s manic, joyous stuff, and Nintendo’s sheer expertise with building character through animation gives these scenes a lot of personality and charm. Naturally boss battles and tougher enemies have different strategies that you need to use to defeat them, but for the most part attack patterns and the strategies you need to defeat the enemies are quite clear.

However, if I was to be critical of any one thing within Luigi’s mansion, it’s that younger kids might find the complexity in terms of just how much is going on to be a bit much for them. Exploring the environment is one thing – Gooigi (Goo-Luigi) is a good idea that adds depth to the exploration and encourages players to think their way around the environments, as Gooigi can slime his way places Luigi is barred from. “Metroidvanias” are all the rage these days because they create an environment that makes backtracking meaningful, and Luigi’s Mansion does a good job of giving players plenty to “solve” through exploration, without allowing younger players to become frustrated and stuck. In combat, however, things are different. It took me some real effort to become comfortable to aiming Luigi’s torch, setting off flashes (to stun the ghosts), and then hoovering them up. The torch is aimed using the right stick, and the game tells you that you need to press the “A” button to flash the light. That means that you can’t aim while you’re flashing.

For the longest time I didn’t realise that you could use the “R” button to flash the light instead, meaning that you can play Luigi’s Mansion 3 like a dual stick shooter. That made things easier, since I no longer needed to take my hand off the controller to use one of the most critical tools in Luigi’s arsenal. I don’t know why the developers even made the “A” button a torch button, or why the shoulder button wasn’t the one explained to players in tutorials. But even then, however, dual stick controls are a little demanding for younger or less experienced players, and given the pace of the action, they might need some help along the way. Overall the difficulty of Luigi’s Mansion 3 is set at a point that most people will be able to kick back and enjoy the game’s many other merits, but the complexity might be a touch much to overcome for some. 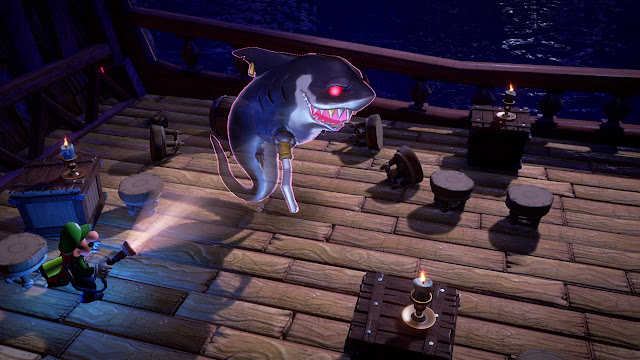 For my first experience with the Luigi’s Mansion series, I had such a good time. Boiled down it’s a fairly simple riff on GhostBusters, but Luigi’s Mansion has been produced with such a sense of humour and eye for detail that it has a personality and uniquely Nintendo quality all of its own. Halloween always brings the deluge of seasonably-themed games, and so many of them aim for a true kind of horror. Nintendo tops the pack this year with something that revels in the silliness of the season, and it does so with panache.