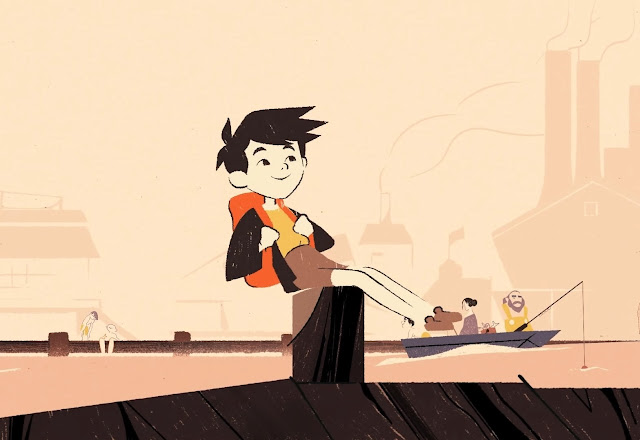 Having recently announced that its company would be focusing less on the indie space to double down on its support of triple-A development, it’s easy to imagine that Concrete Genie as one of the last creative games to receive Sony’s support. Sony’s various subsidiaries had originally helped multiple indie studios bring their ideas to life, letting the world experience games like The Unfinished Swan, Hohokum and Bound. Each explored its own unique niche, art style and gameplay mechanics, and were all in their own way great examples of small-scale development which contrasts against Sony’s blockbuster publishing arm. The PlayStation 4 needed to have mass market appeal after all; colourful, artsy games helped add a family appeal and hook in people not enamored by those big open world shooters.

Related viewing: On Sony’s changing priorities as a publisher

One of the games made in this mindset was Entwined, built and released in 2014 by in-house studio, PixelOpus. This is the same team that is back with its sophomore title: Concrete Genie. This is a wholesome little game about a boy named Ash whose paintbrush can bring colourful creatures to life, and makes a promise to an old lighthouse ghost to restore the abandoned fishing village of Denska back to its former glory. For the most part, its quaint mechanics and exploration will be sure to put a smile on any player’s face.

What I love about this game is the painting mechanic – once Ash’s paintbrush is given its magical power by a lighthouse ghost named Luna, nearly every wall in Denska will become a canvas for the player to plaster a variety of designs over. The game offers 60 unique decals, mostly plants and natural objects, which can be unlocked through finding sketchbook pages while adventuring. Although the player can’t make their own designs, the decals are more than enough to personalise the space to your liking, and the added benefit is that there’s no real way to make a wall look awful. 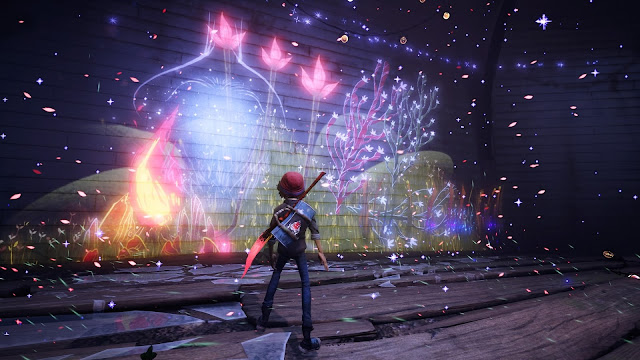 Concrete Genie is primarily an adventure game, and there’s two halves which come together to initially form a compelling gameplay loop. The first half is painting paired with exploration: in each zone, you’ll be tasked with igniting a series of hanging lights with your paintbrush, which will fight against the corrupting dark force and allow passage into later parts of the levels. Throughout Denska you’ll find spaces to draw and summon Genies, which have elemental powers that can help you problem solve and open up additional pathways. Genies are playful creatures which will first ask you for certain drawings, or to be entertained, before they’ll help open the way. If you’re a player who can see them as living beings or even friends then the genies are fun and delightful. If you’re approaching Concrete Genie from a more traditional, game-y mindset however, you might be annoyed that your helper stubbornly won’t clear your path forward until you draw them some mushrooms surrounded by an aurora or something.

The other half of the game’s mechanics is, oddly enough, Uncharted-esque platforming sequences. You wouldn’t guess it by looking at him, but Ash is a fairly spry kid, and you’ll spend most of the game running around Denska’s rooftops and swinging around pipes and cracked concrete. It’s the Sony blockbuster way of looking-perilous-without-actually-being-perilous; if you actually do fall off you’ll simply respawn just before you jumped.

This is to say that Concrete Genie is not really a game about mechanical challenge. Neither the painting or platforming is difficult in the traditional sense; you won’t be losing health, getting game overs or getting stumped over fiendishly complex puzzles. The player is given free reign to explore Denska at their own pace, which is the game’s true delight. PixelOpus has created a vivid, believable space; a fishing village which was once alive with activity but slowly decayed due to an oil spill. The darkness which drove away the villagers manifests in physical form, stretching black and purple tentacles across passageways and crumbling houses. Scattered about the levels are newspaper clippings and other environmental storytelling tidbits which breath additional life into the city, and as the player, you’ll get really invested in Ash’s quest to bring the abandoned town back to life. 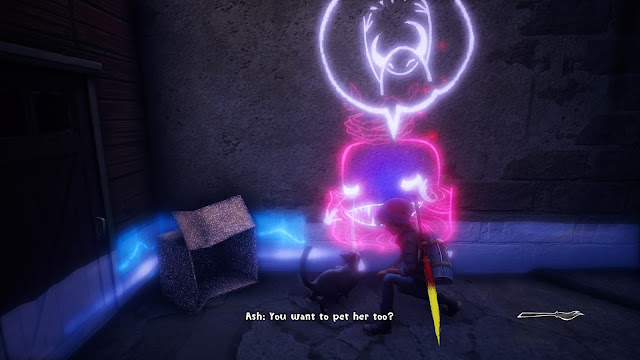 Concrete Genie also explores themes of bullying in its narrative: as Ash wanders through the town he’ll be tormented by five hoodlums with a destructive streak. As the plot develops, you’ll discover the backstory of each bully and come to understand the world from their perspective. The narrative is refreshingly restorative compared to other titles you’d expect to find on the PS4’s lineup – it teaches the lesson that there is ultimate good inside of everyone, rather than suggesting that the only way to survive in a bleak and awful world is to be bleak and awful yourself. The player is led to empathise with each of the characters in a narrative which is poignant and will hopefully teach its audience a little about how to treat others.

That being said, to suit the family-friendly ethos the bullying is sanitised a great deal compared to what is actually going on in real life. There is no mention of ethnicity, gender, socioeconomic status or sexuality in the bullies’ taunts, but rather they just deal in meaningless platitudes like “loser” and “wuss”. On one hand I can respect this choice – there are still moments where Ash is cornered which do effectively convey the fear of being targeted by bullies – but other moments lose their gravitas by leaning too far into after-school-special stereotypes. In some levels the bullies will chase you down and toss you into a dumpster while chucking your paintbrush onto a roof, and it probably says something horrible about my own personality that I found these scenes hilarious.

Late in its runtime, Concrete Genie does something of a tonal 180. While the game’s first chapters are happy to let players explore at their own pace, the last act decides to insert combat mechanics and a completely different gameplay style which had me bewildered. Just to clarify – the game is portioned into six hour-long chapters, and combat is only introduced in Chapter 5. It’s functional but wholly unnecessary, and its lack of depth is reminiscent of 2000’s movie tie-in games where you had to just keep mashing buttons until the enemies went away. 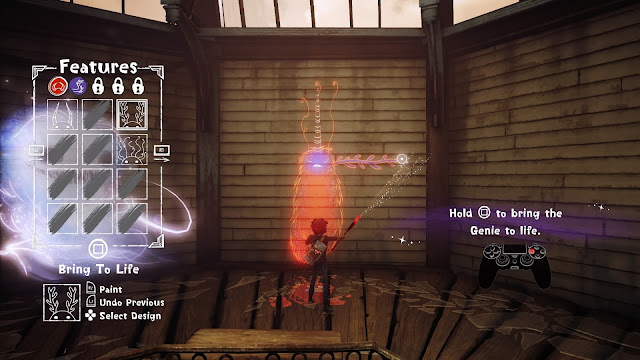 I had to assume that Concrete Genie was a game conceived without the idea of combat in mind. Not only does it feel shallow and shoehorned in, but it rather goes against the game’s themes of restoration and non-violent healing. Ash is not a combative person, and there’s nothing in the plot to suggest his paintbrush would have elemental powers to fight off enemies. I had played for the first four hours assuming Denska’s darkness would be healed through his painting instead. So even though the last two chapters bring together some heartfelt interactions between Ash and his bullies, the contrivance of it all worked against the game’s overall demeanour.

These are just my two cents though: I’m a firm believer that games do not need combat or violence to be compelling, and that audiences can acclimate to finding fun in other mechanics given the time to get used to them. The painting in Concrete Genie, although not especially deep, was novel enough to keep me going, and I would have loved to see a fuller game built around those ideas, rather than the last-minute genre switch which we got instead.

Concrete Genie is a game with a positive message that’s ultimately held back by its execution. While I appreciate Sony’s efforts to let its in-house studios experiment with smaller titles, I’m just not sure that this one will be remembered as fondly as the other PS4 indie exclusives.