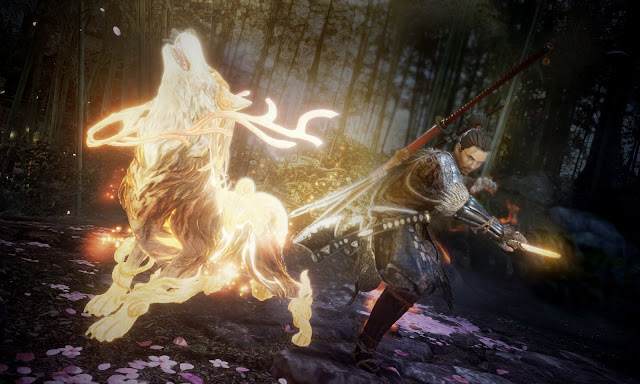 It’s official: Nioh 2 will launch in early 2020. A follow-up to the rather successful (an understatement) and difficult (also an understatement) Nioh, the game will include vast amounts of Japanese myth, legend, and history. Developed by Team Ninja and published by Koei Tecmo, the game is a set in a violent Sengoku-era Japan and follows a half-human, half-supernatural warrior.

Related Reading: What did we think of Nioh? Our review here, and — spoiler alert — we loved it.

The creative director of Team Ninja, Tom Less, has shared a load of new information about the title via a PlayStation Blog post. But first, enjoy the new TGS 2019 trailer for Nioh 2:

As I mentioned, the game follows a half-human, half-Yokai warrior. The theme of the world of men versus the Yokai realm is the undercurrent of the main narrative. The world of men is essentially the real world, in a fictional sense anyway. Our hero also travels to the Dark Realm. Both places are plagued by grotesque demons.

The opening level of Nioh 2 is set in a new area called The Village of the Cursed Blossoms, a land covered in beautiful blooming cherry blossoms but it’s a very dangerous place. This represents another theme seen throughout the game. The developers were inspired by the sakura trees in the real-world area called Chidorigafuchi, and the results should be stunning.

Due to the importance of Yokai in the Nioh universe, the developers were careful to go through a meticulous process, selecting each based on their characteristics and how well they would integrate. Those attending TGS 2019 (we’re there!) are able to play the most demo of the game, featuring a new Yokai named Mezuki. Mezuki promises to test players’ skills right off the bat, so don’t expect an easy fight.

You’re able to choose how you fight, whether its with the traditional weapons of man or the Yokai abilities that lay within you. Filling the Amrita gauge allows you to use your supernatural abilities, or to increase the stats of weapons. Struggling against a foe? Call upon the spectres left behind by other Nioh 2 players; they’ll help through the end of the level… or until defeated.