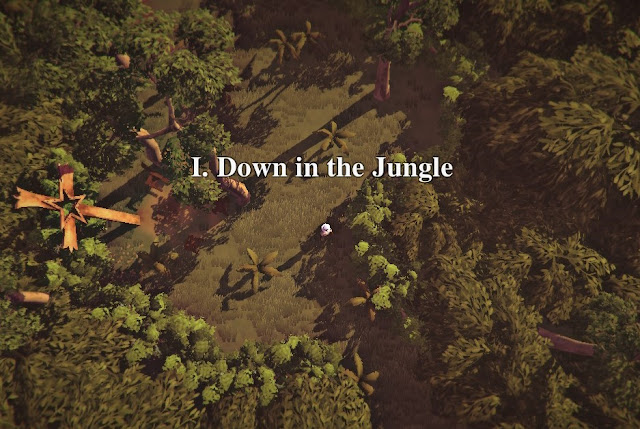 The Church in the Darkness stars you as Vic, the sibling of a member of the Collective Justice Mission cult. In a revisionist 1970’s, the cult’s enigmatic leaders took exception to America’s policies and relocated all its members to an agrarian compound in South America. As communications between the American government and the cult leaders became more tense, Vic is sent in to find investigate what is really happening deep in the South American jungle. You’ll find yourself navigating a procedurally generated island, sneaking around different parts of the camp to find anyone willing to give you some trustworthy information about what’s really going on at the Collective Justice Mission.

There are so many procedurally-generated games that are created now, and sometimes it can be difficult to critique them, as I don’t think the gaming community has ever done a great job at defining what makes good or bad procedural generation. Each procedurally generated game uses it for a different reason – there are the roguelikes and dungeon crawlers which use procedural generation to create interesting combat scenarios for the player to solve, the top down shooters which use it to produce virtually limitless levels to play, and the horror and survival games which use it to impart a feeling of powerlessness against an emotionless randomness. What we haven’t seen a lot of however is using procedural generation as a storytelling experience. We’ve seen incidental successes with games like Darkest Dungeon or The Shrouded Isle, but The Church in the Darkness is a much better example to consider this idea from a critical perspective.

In one of my first runs of the game, I landed in the middle of the forest with just two medical kits and a giant oval on my map in which, somewhere, an informant would be waiting for me. I snuck through a field of crops as the camp leaders, Isaac and Rebecca Walker, blared as disembodied voices over tinny loudspeakers, and folksy songs about the value of work played as I accidentally got spotted and knocked out by a cult member. Rather than get a game-over screen, I woke up in a wooden cage on another part of the game map with all my items missing, under the watchful eye of the world’s most easily distracted guard. After dispatching him (non-violently!) and finding a duffel bag with all my possessions, another cult leader discovered the incapacitated guard and woke him up. Now with two members on my tail, I had no choice but to pull out a pistol and kill them. 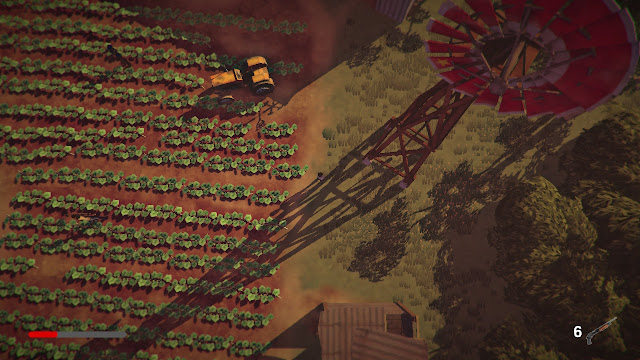 Soon, the whole camp knew of my presence, and my actions. I was the embodiment of the American Evil, my transgressions broadcast across loudspeakers throughout the whole camp. And, when I had finally found my informant, he told me he would not help me: my evils were apparently greater than the ones committed by Isaac and Rebecca Walker, and I was left to search for Alex, and a more detailed map of the island, on my own. Stumbling into an encampment on high alert, I was captured again, placed in another wooden cage, except this time face to face with Isaac Walker himself. He told me that in other circumstances, I would have been able to leave, but because I had caused his followers so much pain, he could no longer allow it. He shot me, and finally I received the game over.

The fact that this game was able to emergently generate this story based on my own actions and decisions, and that other players will have received something entirely different on their first play through, is a technical marvel in itself.

That being said, this fascinating story came to me almost entirely through hindsight. As I was playing, I was distracted by a number of flaws in game design which constantly hinder a sense of immersion or intentionality. The moment-to-moment gameplay is fairly uninspired: it takes after the top-down Metal Gear Solid era of stealth, where players need to just avoid the enemies’ vision cones and snoop around to loot closets for their gear. The overall setup is quite game-y. On the easier two difficulties the player can hit B to reveal the vision cones of every visible cult member, thus as long as they stay out of the fearsome yellow triangles, they can wander the camp unimpeded. The harder two difficulties take away this option, which then makes the game impossibly difficult: guards don’t have an indicator of which direction they’re looking unless they’ve already spotted the player, so it becomes a game of staring at the tops of peoples’ heads, trying to figure out which direction the stationary sprite is vigilant towards. The gameplay mechanics feel too similar to action-stealth titles which were more-often set in military complexes or other, blocky, roomy spaces. But the majority of The Church in the Darkness is set in the wide-open outdoors; the camera is emphatically zoomed out, and you would think a normal human being could recognise an intruder from more than about 20 metres way. 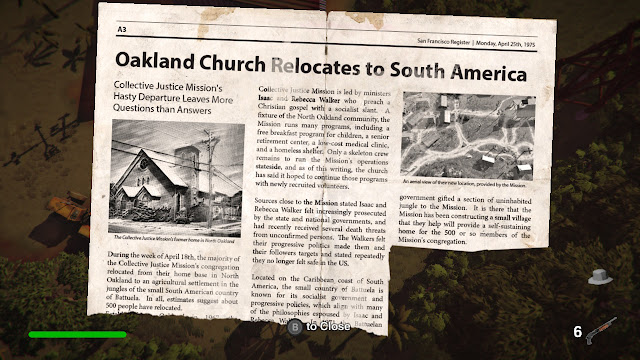 The player is offered a gun to be used in a pinch, but doing so significantly changes story beats and is generally unnecessary when you can also just sprint away; the guards will reset after a while. Being overzealous can lead to a cult member triggering an alarm, which can be silenced or disabled using items found in the environment. I can see that the developer intended players to take things slow; one button throws rocks which will distract the cult members’ attention, and there are also usable alarm clocks which will send most of a camp to a designated spot. But sprinting is just such an effective solution that you’ll rarely need to use anything else. Ultimately, The Church in the Darkness doesn’t feel like a game about stealth and infiltration through its mechanics.

But while it’s not traditionally fun to play, there is still a huge amount of value in the way The Church in the Darkness approaches narrative. This is not a game which uses its Jonestown-inspired setting as window dressing for an action-stealth romp; instead, it’s concerned with the sobering realities of cults, how they form, and how human nature drives individuals to submit to extreme views or commit terrible acts themselves. The developer’s research into theology, historical circumstance and the political context of the 70’s shines through clearly in the narrative, so while the gameplay itself might not be immersive, the ideas and observations about human nature are prescient and long lasting.

Although the production values are fairly low in the graphical department, there is so much talent in the game’s writing that it’s easy to imagine the Collective Justice Mission as a real historical organisation. While the narrative draws significant inspiration from Jonestown, the writing grounds itself firmly in the 1970’s American era – the rise of capitalist society amid the Cold War. The Collective Justice Mission brands itself as a Puritanical Christian Socialist alliance (all things people in 1970’s America were emphatically moving away from) and, especially in today’s modern context, some of their arguments have a point. It takes effort on the player’s part to sift through the news articles, intercepted letters and radio broadcasts littered across the game to make a decisive conclusion on whether the cult is bad or not, and thus what decision to take in the game’s ending. This is made even more complex by the fact that Isaac and Rebecca can have a different personality in each play through – which affects which of the 19 the endings are available on each run, but also gives an extra layer of detail to figure out. 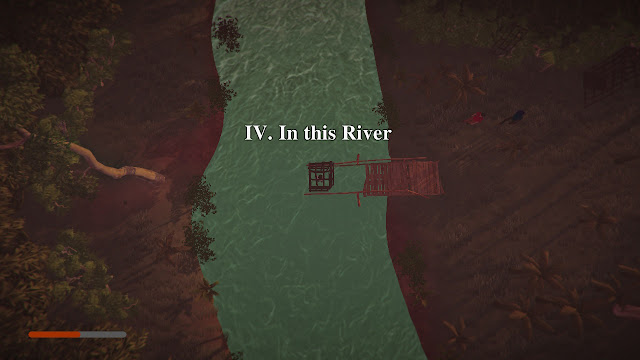 Lastly, I need to do a shout-out to the game’s audio design: the tinny loudspeaker broadcasts of John Patrick Lowrie as Isaac and Ellen McLain as Rebecca are nothing short of chilling, and they are so pervasive that they force the player to keep thinking about the cult’s values as they sneak through the various areas. There are enough unique soundbites that players will be discovering new information on each play through.

The Church in the Darkness has much more value as an idea and as a story creation tool than it has as a game. For people like myself, it’s interesting how the information the game sets as constant from the beginning, but does not reveal to the player, can influence the way a narrative organically develops, and guides the player to adopt different play styles to suit. The team at Paranoid Productions has important things to say about humanity and society, and it does not pull punches with its subject material in the way another recent-high-profile-game-about-cults did: it presents a believable scenario and genuinely challenges the player to come to their own interpretation of the events. If you’re the kind of person who likes their games to provoke thought long after putting down the controller, you’ll also find it easy to look past this game’s surface level faults.

We have a release date for the Doraemon farming game!