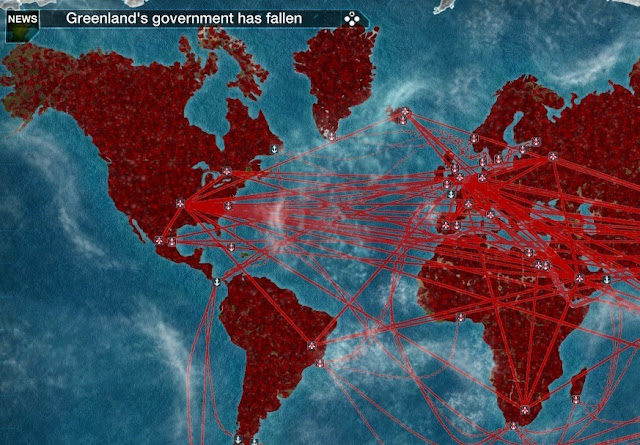 There are two ways to look at Plague Inc.: Either it’s a simple, easy-playing, casual RTS, or it’s a truly terrifying game that has ominous implications for the real world. Or perhaps those aren’t mutually exclusive things. Regardless on how you look at it, Plague Inc. does everything that right in highlighting, in explicit detail, the impact that a major deadly plague global outbreak would have.

If you’ve never played Plague Inc. before, then have a quick read of my review of the PlayStation 4 version of the game, in which I describe the torturous impact of my killer disease, Donald Trump, as it spread from the first American it infected to end up killing all humanity across the world. I thought I was being funny then. Then Donald Trump was only in the run to be president, and I, in my naivety, actually believed that Americans were too intelligent to actually vote for the man. Back then my little joke was funny. Now I feel like I was being frighteningly prescient when I wrote that review.

Anyhow, the point is the basic idea of the game is to take a low level, cold-like disease that has infected a single person, and by using DNA to mutate it, evolve that disease to start killing people, spreading worldwide and, eventually, killing everyone before the scientists can come up with a cure. Plague Inc. is a RTS management game and a race against time – once your disease is potent enough humanity will take steps to try and fight back against it and find a cure by investing in medical research, closing the borders, and shutting down airports and ocean ports. 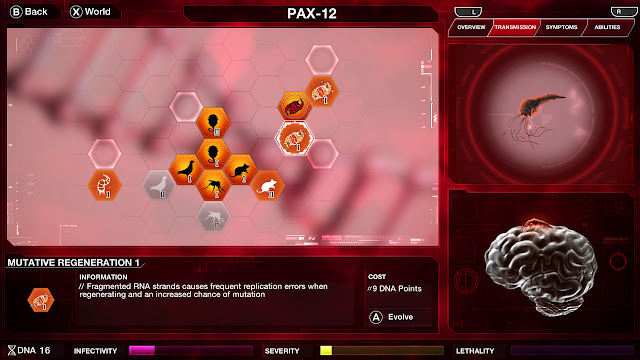 It’s how humanity responds that is rather fascinating, because as simple as it is, I fully believe that the developers behind Plague Inc. spent a lot of time researching this and talking to experts. At first humanity isn’t even slightly concerned. In fact, thousands of people need to have died, and the disease needs to have spread worldwide before anyone of importance will even notice. At that point, the efforts governments take lock down their countries and prevent the spread of disease are quite futile. There’s a couple of times where the people of the most remote places, like Greenland or New Zealand, are able to successfully isolate themselves, being the only people left on the planet when the “Game Over” tells you you failed in your task, but otherwise Plague Inc. acts like an effective model of how disease spreads and how slow and ineffective humanity is at rooting out real existential threats in the medical field.

It’s even more fascinating seeing what happens to society once death becomes commonplace. Around the point that your disease becomes as potent as the Black Death or Spanish Flu, governments start to topple and anarchy starts to reign supreme. Scientists in those countries get less funding, and are less capable of doing their work, despite being the ones in the ground zero zones. Those nations that are less affected continue to share research notes, but humanity’s capacity to defeat the disease declines exponentially the closer it gets to extinction. That says a lot, I feel, about a fundamental selfishness built into the human condition – where we have the opportunity to do the right thing as a community, we will almost always act against out interests in favour of knee-jerk panic and opportunism.

There’s a really wonderful film that I recommend watching on conjunction with playing Plague Inc. Contagion, directed by Steven Soderbergh, puts a more human face on the impact of a global existential threat-level epidemic. With Plague Inc you only get the most broad view of what’s going on – the spread of the sick and dead is represented by little red dots that slowly fade to black as a nation’s population shrinks to nothing, but Contagion shows what’s going on “on the ground,” as people scrap and panic to survive. Because Plague Inc is quite the casual experience mechanically, it’s easy to watch and play at the same time, and the contrasting narrative experiences are so complimentary that it’s easy to imagine the game as a companion app to the film. 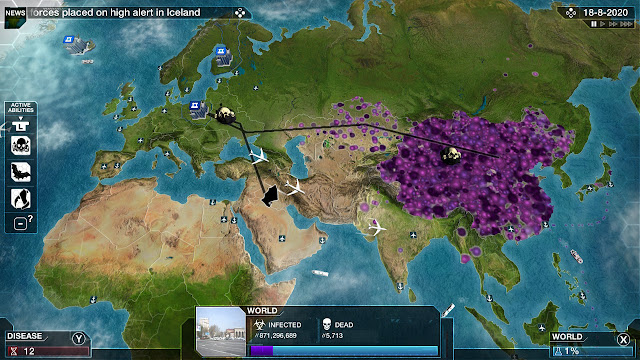 While Plague Inc isn’t overly complex, it’s also not necessarily easy to win, though that’s also the one weakness of the game – when you do lose, it’s generally for silly, gamey reasons. Losing because Greenland’s 50,000 or so people are wise enough to shut down their borders before the one infrequent boat can bring the infection to its port is one thing. Losing because you’ve accidentally created a virus that kills more rapidly than it infects (meaning that everyone with the virus dies and suddenly that virus is “defeated”) is a little too arbitrary for the otherwise strong themes.

Plague Inc. works better on handheld devices precisely because it doesn’t demand your full attention, and playing something of this relative simplicity doesn’t feel right on the big TV screen. Controls are mapped nicely across the Switch, and in the years since this game was first launched, there’s all kinds of fun additions that have been made – my favourite being a scenario that replaces the killer disease with a board game that you’ve got to make so much “fun” that it’s all anyone on the planet wants to play. Call that one “loot box: the game” and you can almost imagine the raging YouTube videos of Jim Sterling as the rest of the world slowly descends into a very different kind of anarchy.

Plague Inc is destined to be remembered as a classic. Yes, it’s a simple, accessible, “casual” strategy title, but it’s also one with some incredibly strong and pertinent themes, and it has an almost maddening habit of getting you to think through its implications long after you’ve you’ve put the console down. I’m glad it has come to Nintendo Switch now, because this is the perfect home for it.

Review: The Church in the Darkness (Nintendo Switch)