Tokyo RPG Factory has, over the span of three titles, developed a distinct voice in its approach to the JRPG. I’m not talking about the team’s commitment to retro-styled gameplay systems and aesthetics, though there’s certainly an element of that. No. The distinctive thread that links these games together is a thematic one; the writers at Tokyo RPG Factory seem committed to a poetic kind of sadness – a melancholia in the vein of Edgar Allan Poe or T.S. Elliot. However you feel about how these games play, the result of that thematic direction is that each title is always beautiful, heartfelt, and has something meaningful to say. Oninaki is yet another brilliant example of this commitment in motion.

For the most part, I don’t find Japan or the Japanese culture to be particularly confronting. I so rarely experience “culture shock,” that it doesn’t even bear mentioning. That is, except in one case, which happened on my second trip to the country (about a decade ago now), and remains quite vividly imprinted in my mind.

I found myself having to attend a funeral for someone in my wife’s family. I’d never met this person, but nonetheless it was important I was there. After the ceremony, we went to the crematorium (most burials in Japan are now cremations), and – and this is the bit that sticks in my mind – after the cremation, the family gathers around, uses special funeral chopsticks, and selects particular pieces of bone. I don’t know why – I wasn’t comfortable enough to ask, and even if I was that was absolutely not the time to be asking questions. But this is how things are done there.


The point of this little story is to say that of all traditions and philosophies that every culture engages with, death is the one that is one where there is the most intense differences from one culture to another. That makes sense when you remember that death means different things on a religious level, and on top of that it’s such an emotional part of the cycle of life that cultures develop their own unique response to it. A response that provides the greatest solace to those left behind. Oninaki’s central theme is death, and while it’s not an exacting depiction of how the Japanese experience and respond to death, it’s nonetheless a reflection on the blend of Buddhist and Shinto spirituality that drives so much of the Japanese view of the world.

In the world of Oninaki, you’re not allowed to be sad if someone dies. Sadness, misery, and other such strong emotions prevents the soul of the deceased to find solace and subsequent resurrection. Over time this has created a culture that has a very different perception of death to anything we really know in the real world. With death no longer being linked to misery, and a certainty of resurrection, people more readily embrace it as something transient, rather than a permanent ending. You play as a combination of reaper (for the souls of the dead), executioner (for those living), and government official and community leader. Because you’re able to cross between worlds, in a world as fixated on death as it is in Oninaki, your ability to work within the world of the dead grants you a kind of prestige among the people.

But of course death is an ending, and for all the pretenses that the people of Oninaki’s world come up with, the various ideological and cultural deceptions at play start to catch up with them. I’m being deliberately vague here, because just like how one of Eliot or Poe’s great poems is at its most powerful the first time you hear it recited or read it, and let the words of leaden melancholy wash over you, the real impact of this game is simply in feeling it for the first time. While it’s an action RPG, Oninaki behaves much more like a quiet, introspective, and evocative experience than you might expect, and it’s delicate enough that it’s easy to get desensitised to far too quickly. This is a consistent problem that Tokyo RPG Factory experiences – every one of its games feels like it’s playable only once, and it’s not because of plot spoilers, or knowing what’s coming. It’s because the mood that the game creates is so subtle that the impact of it rubs off quickly. 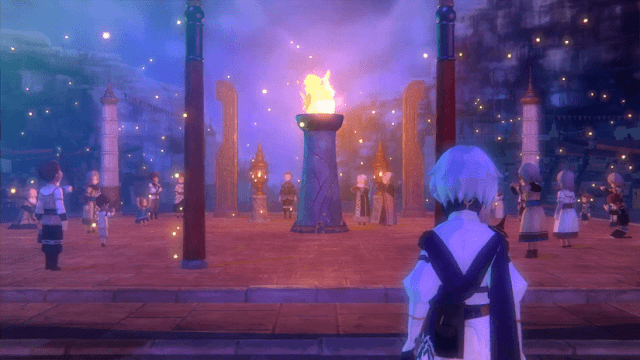 Tokyo RPG Factory games have always been somewhat flawed when it comes to the action and mechanics, and Oninaki isn’t any different here. The basis is sound, giving you an action RPG experience where you can tame and summon powerful demons to help you out in fights. Unfortunately the action is also more stilted than in many other modern RPGs, and the feedback from landing attacks isn’t always as refined as would be ideal. The combat itself is also quite flat, and you’ll follow the same process in just about every encounter – you’ll slash at some enemies, swap your demon powers around to the one that is most useful in that situation, use it, and then roll out of the way. Because the tougher enemies have too many hit points, combat rolls on for far too long, and there’s so much of it. Every time I was invested in getting to the next plot point, I felt like I needed to fight with every step on the way, and in that I think the developers misunderstood where people’s interest in the game will be.

Even the demons are a mechanical misfire, but only because the developer assumed that you’d care about their mechanical implementation. In adding special attacks and the like, mechanically the demons are a basic skill development system. It’s the stories that you hear about the demons and the backgrounds that come on far too infrequently where Oninaki’s buddy system comes into its own. Some of those stories are real tear-jerkers, I tell you what.

The same goes for the exploration elements. Because you have the ability to shift between the real world and the other world, Tokyo RPG Factory felt the need to keep throwing blocks into environments, to force you to shift in and out in order to progress. To call them “puzzles” would be to overstate the challenge the put on the brain, but the do force a lot of busywork on the players – particularly those that want to scour the whole area to look for secrets and the like… or simply take in the gorgeous-yet-subtle art aesthetics. 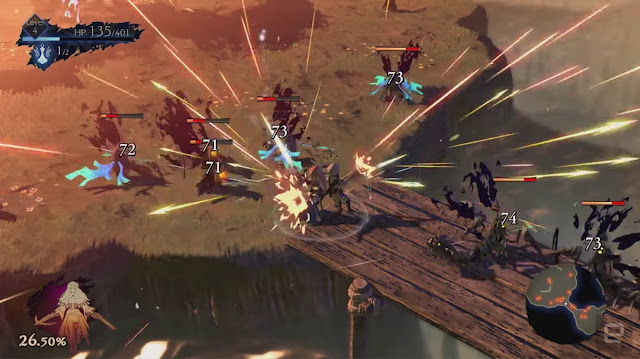 After Lost Sphear and I am Setsuna, it is clear that Tokyo RPG Factory wanted to ramp up its gameplay credentials. Everyone already knew that it could tell a beautiful if sad story, but it seems like the criticisms about the less-than-engaging combat systems in efforts past got to the team. Sadly Oninaki is still not a particularly interesting game insofar as the button pressing side goes, and the increased focus on the combat is draining. With that being said, move past the combat and you’ve got yet another powerful and deeply human story, told in such a way that it’s pure poetry to behold. Oninaki is three for three as far as sad, but beautiful tales from Tokyo RPG Factory go.