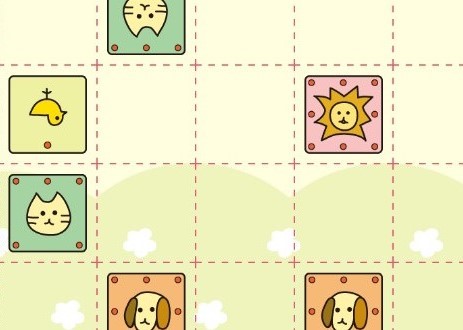 Shogi – often referred to as “Japanese Chess” – is an irritatingly obtuse game to learn how to play. Especially for those who don’t speak Japanese. With Chess, abstract as it is, pieces are designed to be visually familiar – once you’re told that the king is the most important piece, it’s easy to see the king on the board and understand instantly where your most important piece is in the context of the game. Consequently, while it might take a lifetime to master Chess, it’s a easy game to learn.

Related reading: There’s an excellent take on Chess also available on the Nintendo Switch, in Chess Ultra. Our review.

Shogi, meanwhile, represents its pieces as simple blocks of wood with kanji characters printed on them. You can be told what each kanji represents, but in the heat of the melee, all these pieces look too similar to one another, and it takes a lot of rote play and practice in order to get the point where you can look at the board and, at a glance, interpret what’s going on and what each piece is doing. Addressing this learning challenge is where Dobutsu Shogi comes in, and I’m so glad that someone thought that localising something this… esoteric… for the western audience would be a good idea.

Dobutsu Shogi was developed as a way of teaching children how to play Shogi. It replaces those overly similar kanji characters with colourful animal designs that have the same visual impact that chess pieces do – the lion is, of course, the king. The rabbit “hops” around the board as the knight does in chess. The boar, being the stubborn, violent animal that it is, can only “charge” forward. And so on and so forth. Each piece is represented by an animal and behaves, in an abstract way, just as the real-world animals behave. This means for children – and anyone learning Shogi – there’s that instant familiarity and level of understanding of the role of each piece on the board. 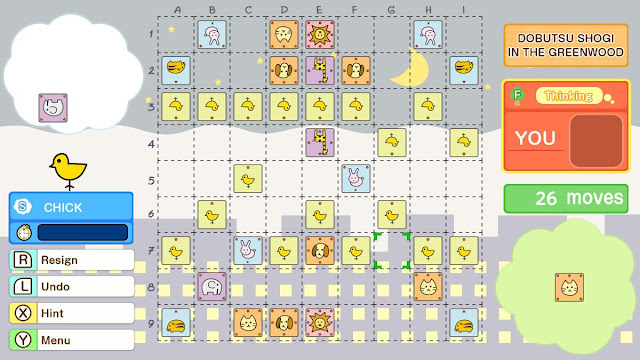 Additionally, Dobutsu Shogi has three variants, each more complex than the last, and it’s designed so that you “graduate” from one to the next as you become more comfortable with the rules and flow of Shogi. The first variation is Dobutsu Shogi itself. It features just four pieces on each side, on a play field that is just 3 by four squares. It’s trivially simple, but it’s enough to convey the very most basic rules of  Shogi, and get people practicing the use and behaviour of several critical pieces.

Goro Goro Shogi is the first step up. Played out on a 5 x 6 sized board, it’s the basic game of Shogi, but again, with fewer pieces and therefore a lower level of complexity to manage. Finally, once Goro Goro Shogi is comfortable, players graduate to Dobutsu Shogi in the Greenwood, which is the full and unabridged version of Shogi, though it keeps the cute animal characters, so players can get used to the proper game while still using pieces they’re comfortable with. Once that’s mastered, it’s time to get on down to the parlor and make some new friends playing the full game of Shogi.

Unless you’re a very young child, once you run through the tutorial that Dobutsu Shogi World offers, you may as well just jump on to Dobutsu Shogi in the Greenwood and stick to that. The playing pieces all have little indicators on them, to show you the direction that you can move them, and the game is a nice, low-pressure way to play Shogi for newcomers to the game of all ages. There’s both AI matches (with eight degrees of difficulty), and the ability to play local multiplayer, but sadly there’s no online play. With that being said, as a training tool, the AI can put up a stiff challenge, and by the time you beat the most difficult AI, you are well and truly ready to start playing full Shogi.

As a warning to Chess fans, Shogi does have a couple of unique tricks that can be maddening to learn, because they require a degree of unlearning from the strategy and tactics of Chess. One is that captured pieces can be returned to the board on your side, on your turn, as an action instead of moving one of your pieces. The other is that those pieces can be returned almost anywhere on the board, with very few restrictions, including on your opponent’s side. In other words, it’s very easy to drop your captured pieces behind enemy lines and start threatening the king. Because some pieces (though not all) can move backwards, it’s important to keep a reserve behind the front line in order to account for these ambush tactics.

You’ll learn quickly how important this is to Shogi, as the AI will start using these tactics on the second lowest difficulty, and as someone who generally plays Chess against the highest level of AI (and wins), I found it infuriating that I was being outplayed by the most basic of opponents at first. But I started to unlearn chess, approach Shogi in a different way, and from there I was able to start moving up the difficulty scale… and that is exactly the point for this, a learning application first and foremost.

Aesthetically, Dobutsu Shogi is an exact replica of the real-world board game, which is both delightful and pleasing. It’s childish, of course (that’s the point after all), but it’s still lovely and clean. There are also a couple of options that you have to play around with – you can set the time of day to “daylight,” “evening” or “nighttime,” and there’s a couple of different inoffensively cheerful music tracks to choose between. You shouldn’t be coming into a game like this expecting stunning production values of course, but there’s nothing in here that’s poorly produced or feels “cheap.” Actually, I found the presentational elements to be quite admirable.

If you’ve ever wanted to learn Shogi, then this is the most accessible learning tool that we’ve had released in the west. By the end of it, you’ll be comfortable enough with the game to start playing the real thing. As to whether that’s enough to justify the steep asking price, think of it this way: I believe you learn a lot about a culture by the games it plays, and Shogi is a deep and enduring cultural artifact of Japan. So, if you do have a genuine interest in the country, its history, and its culture, then I would suggest that learning Shogi is important… and learning opportunities of this standard are few and far between.