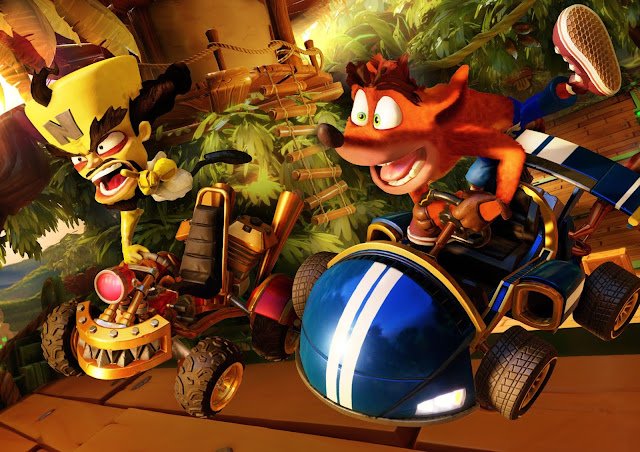 What a delight Crash Team Racing Nitro-Fueled is. For whatever reason it has proven to be hard for developers to even compete with Mario Kart, sitting high on its kart-racing party game pedestal, and while Crash Team Racing doesn’t quite get there, it’s the closest anyone has come in many years.

Perhaps the secret is that the developers didn’t do much to try and innovate, or change up the formula. This is a straight, by-the-numbers kart racer, with a large roster of silly characters, precise, clever track design, and zany, amusing weapons to hurl around the place. In saying that it’s by-the-numbers I’m not suggesting that it lacks for effort, because from the details in the visuals right through to the range of gameplay modes there’s nothing half-hearted about Crash Team Racing. Rather, it very much plays like a game developed by people who have nostalgia for their time with kart racers back on the Nintendo 64 and PlayStation 1 and 2, and wanted to recreate that exact aesthetic, tone, and verve.

The adventure mode is exactly what you remember from the Crash racers from a couple of generations ago. There’s a hub to cruise around, filled with nodes, with each note representing a race to participate in. As you win more races, you unlock more tracks to compete on, but that’s not the end of the action – you’ll also be able to drop back into completed tracks to tackle additional objectives, and completionists are going to have enough here to last them for a very long time. 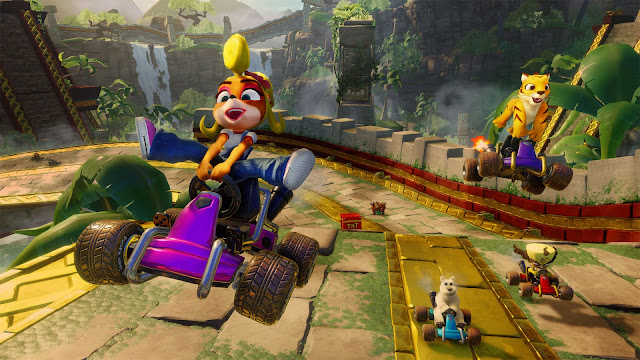 Then there’s also the “Arcade”, with a half dozen other ways to play, as varied as standard, four-track long “cups,” collect-a-thon modes, battle modes, and the ever-faithful time trial. Thanks to the careful balancing, and huge variety in those modes, Crash Team Racing offers the kind of party experience where there’s something for everyone, and I can see this easily becoming one of the high rotation Friday nights-and-beers games on the PlayStation 4. Other kart racers (such as the recently-released Team Sonic Racing), missed the mark there a little, being focused too hard on racing mechanics, but the silly weapons and gentle learning curve approach towards the racing itself makes Crash Team Racing something that people of all skill levels can also enjoy, even if it takes them a while before they start winning racers.

Skilled players will get a lot from the game thanks to the way that power-sliding and boosts work. In Mario Kart, holding a power slide for long enough will give you a small boost, or you can waggle the stick back and forth to build up to more explosive boost energy. It works, but it’s relatively easy to master. With Crash Team Racing, a power slide starts a power meter building up. Once that happens, you can “boost” up to three times, with each boost providing a bit of extra speed. The kicker is that the closer you let the power meter get to over filling (and therefore losing all bonus speed completely), the greater the boost you’ll get. So a big part of the skill involved in Crash Team Racing is getting a feel for the exact timing to activate these boosts through a power slide.

Nothing feels better than nailing all three boosts for the perfect, extended speed boost. It’s hard to do, thanks to how much tends to go on through a race, but if you’re able to, you’ll have a real competitive edge in the game, because those boosts offer more additional speed than any of the speed boost pads scattered around a track will. At the same time, it’s not such an advantage that people racing around with you will feel like they’re uncompetitive. The developers have clearly worked hard on ensuring that everyone can feel “in” a race, while also rewarding those that have greater racing skills, and if anything I’d say Crash Team Racing has an edge here over Mario Kart, because that game relies much more on using items to balance the action out, and no one likes being dunked on by six shells simultaneously just because they happen to be out in the lead. 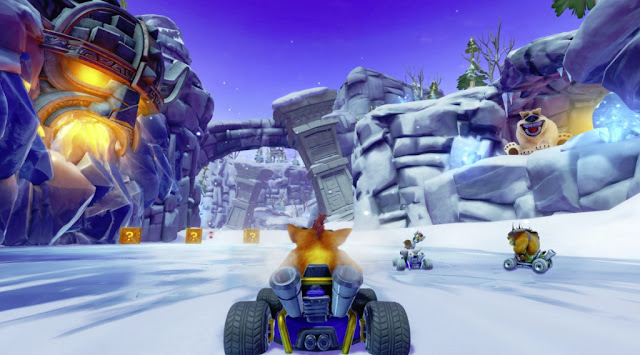 Crash Team Racing has a good range of tracks, brimming with colour and personality. Roads tend to be a little narrower than we’ve seen in some other recent kart racers, making mastering them a more skillful exercise, while (again), not leaving newcomers feeling like the tracks require unfair precision. Whether it’s the dirt track, the neon-infused futuristic track, the underwater pipe or the jungle environments, Crash Team Racing doesn’t do anything that you would exactly call “original,” but it works within tradition well.

Finally, the racers. The Crash Bandicoot license is a fun and well-regarded one, and that makes all the difference. The range in racers is such that everyone will have their favourite (for me, it’s the tiger), and there’s more than enough to unlock to keep you playing for a long time to get everything. The only downside to the unlock system is the way that it works on a rotating basis, with new stuff to unlock every day or so, using in-game coins. You earn enough virtual coins via playing that if there is the option to buy more via real money as a microtransaction, I never felt the need to, but this system does encourage a lot of grinding and teeters dangerously close to turning the whole experience into something of a chore, by the time you’ve unlocked everything. When it comes to party games I do wish developers didn’t try and make you work so hard for everything.

Still, Crash Team Racing Nitro-Fueled is exactly what the doctor ordered. It’s light-hearted, hugely entertaining, and made with a real eye for detail that helps elevate the overall experience. After the disappointment of the recent Sonic one, this has put everything in the world right again.