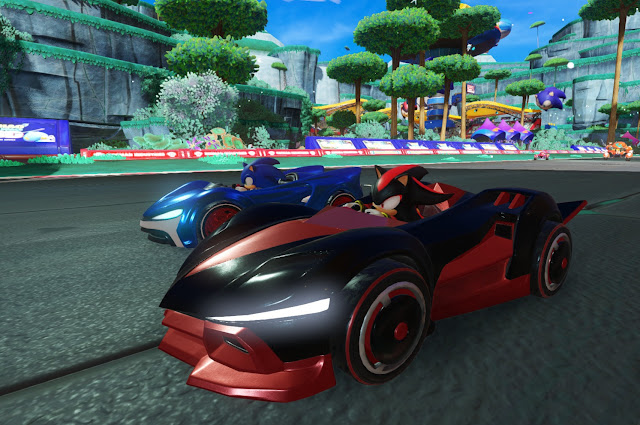 Sonic the Hedgehog needed something good to happen. Anything positive. He has had such a bad time of it recently with the trailer to the live-action film that he’s needed a good-news story to prop his name back up again.

Yet, Team Sonic Racing teeters somewhere between the very, very good and the very, very bad. Sumo Digital usually craft such great racing games, with the likes of Forza Horizon and SEGA All-Stars as part of its repertoire, so it begs the question as to why this one feels so average in comparison.

Each of the SEGA racing games come with a distinct theme to set them apart. The first title had three types of vehicle, where each had their own advantages depending on the track itself. The second (and arguably best) title allowed vehicles to transform based on the surrounding terrain. This time around, everyone drives cars in teams of three. The objective for each race is to have all three racers in a team rank high enough to come first overall. If you come first, while your teammates come in the last two places, you might very well still not win the race. It’s an attempt to put some tactics into the racing, and it actually does work… to an extent.


There is a surprising amount of strategy involved. Racers are able to drive within a teammate’s slipstream to gain a boost, and experienced players are able to use this to give consistent boosts to their buddies. Collecting Wisps (weapons) allow you to shoot rockets, drop obstacles, turn invisible and more. There is the option to either use a Wisp yourself or pass it on to a floundering teammate to give them a hand. There were many times where I was racing in first place, passing on Wisps to my teammates and watching their position in the race rise.

For every team action performed, a meter sitting underneath the rear bumper slowly fills up. Once the meter fills, an ultimate team move is available to move that speeds up all three members of a team while turning them all invincible. Using this “super power-up” to move up a few places while taking out opposing racers is imperative to winning as a team.

All of these mechanics work together well to form a functional mascot kart racing game. Unfortunately, the biggest and most obvious reason is that at some point the decision was made to ditch SEGA itself as a franchise and lay the focus solely on Sonic and a number of his friends and foes. The two previous games by Sumo Digital included a number of characters from a wide array of SEGA franchises, including dormant titles like Golden Axe, Alex Kidd and Jet Set Radio. This opened the game up to some really creative tracks, vehicles and situations. The same can’t be said for this latest effort, unfortunately, as the roster is purely Sonic characters, and the tracks in this game are mostly based upon the later games in the Sonic series. 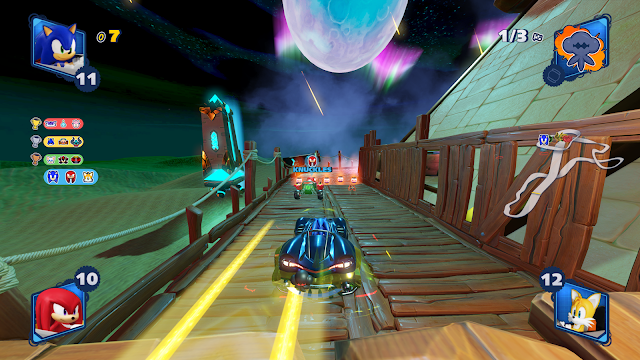 The roster in of itself is a similar mix of those who tend to make it into the Mario & Sonic Olympic series. You’ll get the ones you’ve always loved such as Sonic, Amy, Knuckles, Dr. Eggman and Metal Sonic. Others include the likes of Silver, Vector and Omega who usually only appear in Sonic’s forgettable outings. It’s very hard to look favorably on this roster in comparison to past SEGA racers, considering we can no longer play as the likes of Gilius Thunderhead, Joe Musashi, AiAi or Alex Kidd.

Furthermore, there’s no way to choose your own team. As an example, Sonic is always tied to Knuckles and Tails, and Dr. Eggman is always with Metal Sonic and Zavac. Some teams, like Blaze, Silver and Vector, don’t make any real sense in the Sonic “canon”, other than the fact that those characters needed a team to be on.

The plot of the game sees a tanuki by the name of Dodon Pa invite the Sonic crew to his planet to take part in a series of dangerous races. Sonic seems thrilled at the opportunity, while his friends don’t believe Dodon Pa to be overly trustworthy, and feel like Dr. Eggman is up to something. Somehow and someway, Dodon Pa’s invitations make it to other dimensions and eras to explain the presence of both Silver and Blaze. The story itself is nothing special, and merely serves as a plot device for the Adventure Mode. You’ll need to spend a lot of time in this, because without it Team Sonic Racing wears very thin, very quickly. 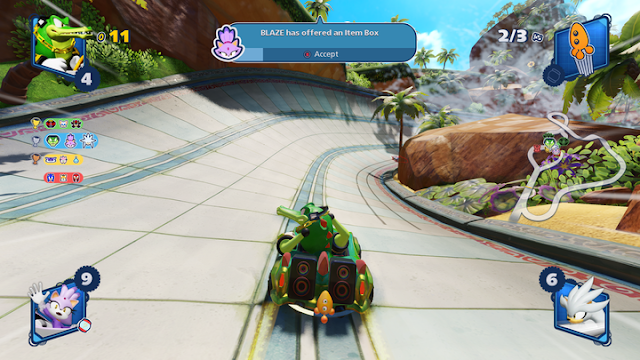 There are some unique aspects of Adventure Mode. This mode contains a number of objectives for each race in order to earn stars. A common objective is to both come first as an individual and also have your team win the race overall. Other objectives involve collecting a certain number of rings through a race; or keeping your entire team safe in an elimination race where the last person to cross the finish line each lap is eliminated. These secondary objectives adds an additional element to the standard racing and keeps things interesting, though in my time with the game, there weren’t too many objectives that could be considered challenging.

Along the way, racing earns credits which can be used in a Gacha machine to earn customisation options for all the vehicles. Some are useful, such as carparts that can be installed to the vehicles to change their speed, acceleration and handling. Others are purely aesthetic, including paint schemes and horns that make just about any vehicle look shiny and great.

Team Sonic Racing is a decent kart racing game. It’s very unfortunate that Sumo Digital decided to fixate solely on the Sonic the Hedgehog franchise. The lack of SEGA’s wide variety of franchises makes the game feel very samey throughout, and only fans of Sonic will get a kick out of the use of the IP. On the plus side, the team elements of the game works really well and that offers a unique way to play a kart game. It’s not the best or most interesting racing experience out there, but there’s some entertainment to be found in Team Sonic Racing, particularly for younger fans of the blue hedgehog.