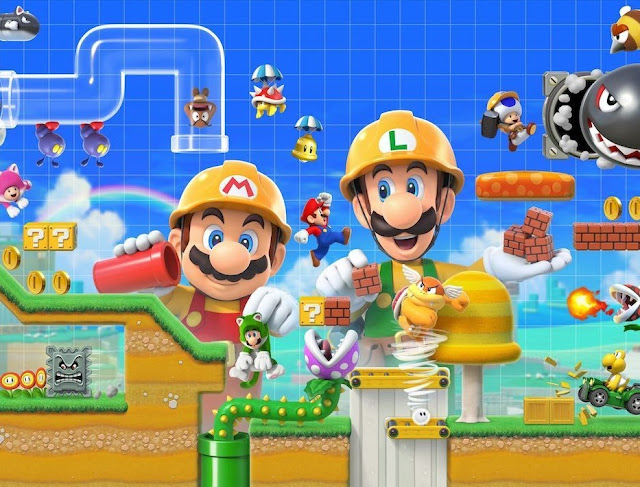 Super Mario Maker 2 is the next big Nintendo release for the year, and while we have a review in the works, in this here preview period before the various embargoes lift and we’re allowed to talk about it in full, I’ve just got to remind people of just how easy it is to make levels with this thing.

Within the first half hour of booting the game up for the first time – and having not really played with Super Mario Maker since the Wii U one (the 3DS Mario Maker was an abomination), I had a level done. It’s a level that can be completed in thirty seconds, but clearly it’s a masterpiece of design, and Nintendo should tap me as a designer.

Okay I’m being sarcastic and my level is terrible, but I was able to cram all the basic functions of a Mario platformer in there, as well as a couple of more advanced elements (such as the enemies popping out of the pipe. Thanks to the ridiculously simple drag-and-drop interface, I was able to figure all this out without dropping into the tutorials to refresh myself on how Mario Maker works. Of course, there’s a deep set of tutorials built into the game for people, spread across “beginner”, “intermediate” and “advanced” for people who are less familiar with builder games.

Building terrible, silly Mario levels is the most fun I have with platformers. As a kid, it was one of my favourite genres, and I remember spending hours drawing out my own level designs on grid paper. Of course I knew better what make a good platformer than Miyamoto, after all. I mean look at the level I created there. I still got it.

I made this amazing level gimme job Nintendo #NintendoSwitch pic.twitter.com/PwbSuM6B9O

In my old age now (and Christ have I got a sore neck at the moment to feel my age), I’ve become much more driven by the narrative potential of video games, and platformers rarely do it for me now. But playing around with a virtual toybox of bits and pieces isn’t really a platformer experience. It’s free-form creativity, and that is a delight.

The one thing I’ve always been curious about is whether people who don’t enjoy creating levels in Mario Maker see value in these titles. I certainly hope so, because the number of stages that are uploaded by the community is incredible. Thanks to solid filtering and searching, it’s possible to find the kinds of levels that you’re most interested in, and while there is a lot of terrible work there that will waste your time if you accidentally play it (sorry, for anyone who accidentally finds my level, because of course I absolutely uploaded that one), there are also a lot of designers that Nintendo really should look to recruit. And, you actually get to see the point where other people failed when playing a community creation, so there’s a nice sense of shared community in the actual playing of these levels too.

Nintendo hasn’t skimped on what’s gone into Super Mario Maker 2. There’s plenty of single player stuff to do before you even start to delve into the creation and community sections. Returning fans will also enjoy the additional aesthetics available to them in creation. As a fan of retro Mario, however, I must express my disappointment that Nintendo didn’t give us a black-and-while, Game Boy Mario palette to work with. I suppose that those are so different that they’d be incompatible with the other palettes and would require a lot of unique elements, but it’s disappointing nonetheless. I’m one of the few fans of Super Mario Land out there. Got that whole game memorised, I do.

As mentioned, we’ll have the full review of Super Mario Maker 2 up soon enough. Nintendo’s obviously onto a winner, though, and the number of Wii U experiences that we still need to make its way to the Switch has dropped to two: Give us Tokyo Mirage Sessions and Project Zero: Maiden of Black Water, and that box can be put to rest for good.

Puzzle & Dragons Gold is coming to the west