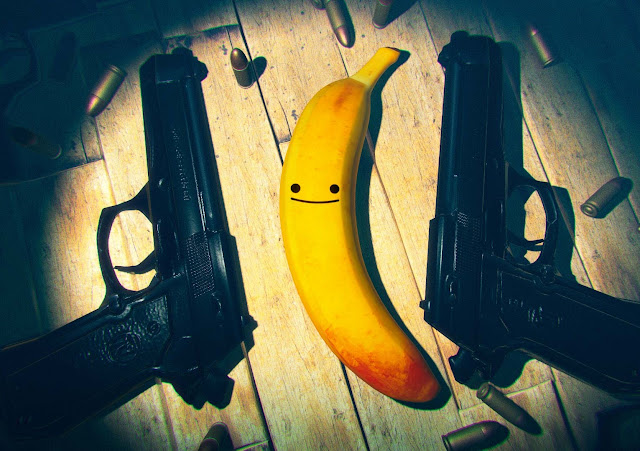 My Friend Pedro is admittedly very on brand for Devolver Digital, and it’s no surprise either that it first found life as a Flash short on Adult Swim Games. It’s another in the line of skill-intensive, individual-expression-through-stylised-violence games that follows in the wake of Hotline Miami and Katana Zero. Developed by Swedish one-man-studio DeadToast Entertainment, My Friend Pedro is a sidescrolling platformer-shooter with parkour elements, focused on kinetic movement and stringing together huge combos. You’ll find yourself in the shoes of an unnamed protagonist who travels through time for some reason (his best friend’s a talking banana!) and killing legions of armed goons with style.

Before talking about the game for its merits though, let’s take a detour to discuss the game’s use of violence, and how it fits in the grand scheme of things. I say this because the narrative of My Friend Pedro is at least passingly interested in game violence, and it has more than a few jokes at the expense of players whose minds are purportedly warped by violent video games, and yet – violence is an integral part of this experience. The game conjures an emotional state which reminded me of Hotline Miami: a confusion over whether the game is meant to be serious and comedic, and a personal introspection about whether game violence is cool, shocking, both, or neither.

It’s not uncommon for games as a medium to use extreme violence for the sake of comedy – we see examples like No More Heroes and Dead Rising from Japan and everything from Bulletstorm to Borderlands in the west – and it seems as if comedic hyperviolence is much more prevalent in games than any other medium. And into the mix we can then consider games like Hotline Miami and Overgrowth – games which portray violence as something dark and defamiliarising, as a last resort to ensure personal survival, and yet sickly, intoxicatingly gratifying. While I don’t agree that video games cause violent behaviour, I definitely think that prolonged exposure desensitises players to the depiction of violent acts. But on the other hand, I think we’ve been able to have much more mature, honest and sobering discussions of violence, precisely because video games are able to represent their impact better than film or prose. 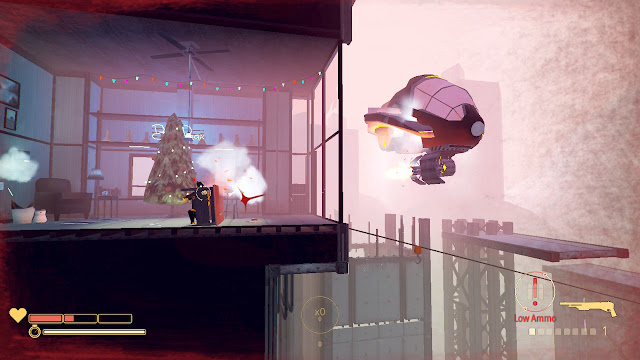 I make this digression on game violence because I spent my entire playtime of My Friend Pedro desperately trying to squeeze some meaning from it; to grasp some kind of profound, thought-out perspective. But I can’t shake this interpretation: to enjoy this game, you must simply enjoy being the perpetrator of violence. The game’s mechanics align the two far too clearly, and much more so than in any other Devolver indie title I’ve played to date. Don’t get me wrong – My Friend Pedro is certainly very well made, and enjoyable, but it just gets me thinking.

This is a game about stylishly killing enemies in order to rack up points. The game’s levels are not particularly difficult to get through. Enemies have flimsy AI and don’t pose much threat, and your deaths will mostly be attributed to environmental hazards like bottomless pits. At the end of each level though, you’ll receive a grade based on how quickly you completed the level, whether you managed to kill every enemy and also an overall point score, based on your performance. You’ll also be treated to an action-replay of the “coolest” kill you did.

You earn points by making the most of the game’s various parkour mechanics, which are designed to make you feel like an action hero. Your character naturally flips and wall jumps with an impressively fluid animation, and you can keep firing your guns as you somersault through the air. Hitting the left shoulder lets you do a ballet pirouette that dodges all incoming gunfire, and clicking the left stick lets you enter slow-mo which allows an even greater degree of acrobatic movement. Killing multiple enemies in a short amount of time starts a multiplier, which keeps compounding as you rack up the bodies. The key to getting a good score in any level is to be quick and efficient, yet planned and methodical – tracing the optimal path through the level to keep your combo streak going while dispatching enemies mid-backflip-pirouette. 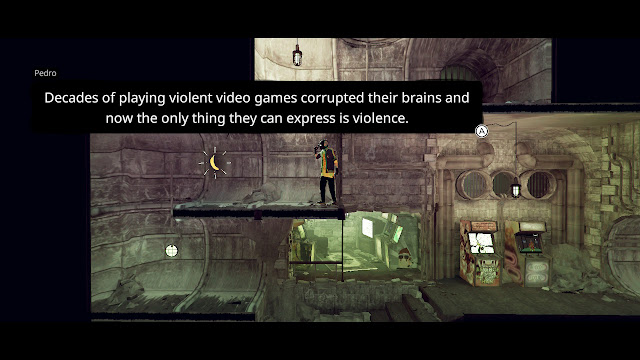 Score hunting is the name of the game in My Friend Pedro. Each level has its own set of global leaderboards, challenging players to achieve the highest possible score they can. The benchmarks for each level’s letter grade are also remarkably strict – don’t expect anything higher than a low B your first attempt of any level. This lends the game, with a modest eight hour campaign length, a lot more replay value. More advanced players can also challenge themselves with two harder difficulty modes. A dozen levels in, I found myself really enjoying My Friend Pedro. I would go back to levels I’d already completed, and map out enemy spawns to plan out how to kill them in the most stylish manner to maximise my final score. It was admittedly a fairly morbid affair; one which had me hoping the game had some proper commentary on the nature of game violence to ease my conscience a little.

But My Friend Pedro’s narrative is very deliberately obtuse. It’s the classic Devolver and Adult Swim style of pulpy irreverence, with a tongue so deeply in-cheek you’re not sure if they even have a sense of taste anymore. The game’s campaign will take you through your average mobsters, a junkyard, and then more surreal landscapes without ever really giving a proper rationale for who you are, or why you’re being told by a talking banana to kill all these people. With a narrative that isn’t clear on whether it’s genuinely funny or serious, the onus falls back onto the gameplay to deliver the game’s core values.

And at the end of the day, I’m not sure if I’m happy with what the game represents, but I can’t help but admit that the levels are well made and the core gameplay is immensely enjoyable. I’m sure there will be players who can switch off the thinking half of their brain and fall in love with DeadToast’s graceful shooting extravaganza, just as there will be players who might find the game’s gleeful violence offputting. The debate remains whether there is still an appropriate space for a videogame that revels in the act of stylised violence without any sense of criticism. Perhaps it’d be better to resolve those questions before buying into this one, because you sure won’t find answers here – it’s as if the game’s narrative is setting out to make fun of anyone who is trying to think more deeply into it. I did leave My Friend Pedro wanting more. But I also have to admit, I have all these videos of slow-motion backflip guns-akimbo kills saved on my Switch now: pulling them off was no easy feat either, and in an odd way the game makes you feel proud of these achievements.

I made a level in Super Mario Maker 2. Hire me now, Nintendo!

Disaster Report 4 is coming out west!