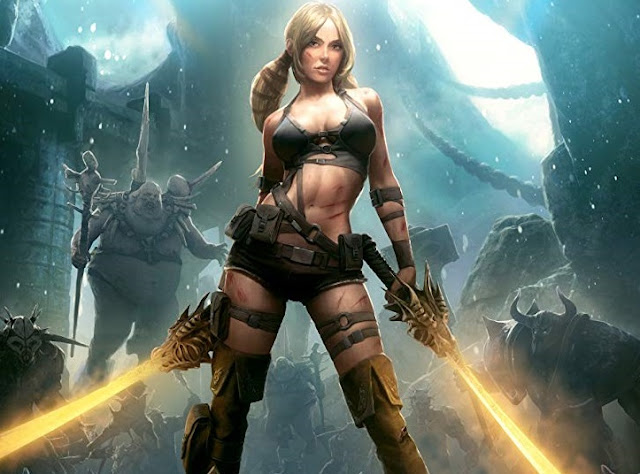 I’m all for game developers and publishers bringing back the more obscure older titles for re-release on modern console. Games that perhaps didn’t get a fair outing the first time can be “discovered” by people a second time around, or games that proved to be influential or historically important can be re-evaluated as they deserve. From Onimusha to Okami, Final Fantasy to Valkyria Chronicles, there are a lot of classic games I don’t begrudge a Switch re-release at all. Among the long list of PlayStation 2 and 3-era titles that have yet to make their way to Switch (NieR, anyone?), I can’t imagine anyone actually wanted to see Blades of Time as next in line. It was never a good game, and time hasn’t been kind to it.

Blades of Time comes to us from that action/adventure era of the earlier Devil May Cries and God of Wars. In itself, that isn’t necessarily a bad thing – you run from “room” to “room”, solving basic puzzles and fighting through hordes of enemies. It’s a purely linear game, but there are some basic navigational challenges to deal with – locked doors that need switches thrown, and areas where you need to use dash jumps to get from place to place. Anyone who has played a Devil May Cry or older God of War title will be immediately familiar with the basic premise of Blades of Time.

The one neat idea that Blades of Time stands on is the ability to manipulate time. The protagonist picks up a couple dozen abilities on her quest, to help breeze through combat and traps, but the most notable one is the ability to, at any point, reverse time. This creates a “time duplicate” of the protagonist, that starts running backwards and completing all the same actions that you just performed in reverse. The first puzzle that uses this ability is also the best for describing how it works. You need to stand on two pressure plates at the same time in order to open a way forward. There’s only one of you, so the solution is to stand on one platform, run to the other, and then activate the time reverse ability, so the duplicate appears, runs “backwards” to the point in time that you were standing on the other platform, and does that for you. Now “you” are standing on two pressure plates at the same time, and the door unlocks. 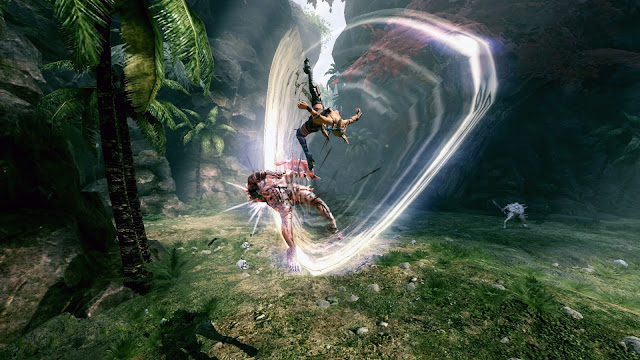 This ability is useful in both puzzles and combat, and in fairness to the developers, it’s a great idea that does force you to look at challenges in a way that other Devil May Cry clones do not. Unfortunately, it’s also poorly executed, and filled with bugs, and you’ll be spending too long dealing with clumsy controls, wonky camera, cheap boss fights, and other such nonsense to enjoy any of this system.

The Switch re-release is of a particularly poor standard, too. Frame rates – not something I usually care to mention – shudder their way through the game, and at one point I encountered a really strange bug where certain parts of the game appear to have been sped up, while other parts did not. This happened right at the first boss battle, and it meant that it was almost impossible to actually hit the boss (because every time I attacked, my character was swinging at a “locked on” area where the boss had already moved away). After scraping through that fight the subsequent cut scene featured a voice track running ahead of the on-screen actions… and then the whole game crashed, with data corrupted and I needed to start again. The things I put myself through for you, dear reader!

Visually, Blades of Time holds up surprisingly well. Environments are vibrant, almost to the point of distraction. This was a game that was originally built for the big TV experience, so in handheld mode on Switch the finer details are hard to spot. Enemies do show nice detail and variety, and the protagonist, Ayumi, is a sexy character model indeed. It’s like if Lara Croft decided she wanted to strip down and wear her hair in twintails. I’m all for hot pants, bikini tops and twintails – the costume doesn’t really make sense beyond “it’s sexy”, of course, but to get anything out of this game you’ve really got to just dive down the rabbit hole. 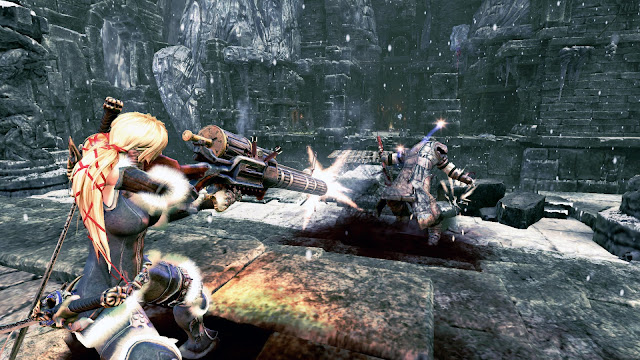 Unfortunately, all the effort that went into the visual design is wasted, because Blades of Time does nothing to try and immerse you in the world. In theory, Ayumi is an intrepid treasure hunter on the cusp of finding a legendary score in a forgotten world. There’s nothing about the narrative that really pushes the riff on the journey to find El Dorado forwards, though. Voice acting is woeful, and dialogue is functional. Like most games of the genre, Ayumi collects souls from enemies she’s killed, and then trades them in for special abilities. With Bayonetta, you’d give that “loot” to a dude that then pops off into hell to get your prize in scenes that were consistently amusing. In Darksiders, there was a slimy little demon to deal with. With Blades of Time, the a voice from the statue says “gimme souls. I’ll help you,” and… that’s it. That’s all the characterisation behind that particular relationship.

There are little notes you can pick up along the way, that are written by a Journey to the Centre of the Earth-like explorer, and Ayumi has an obsessive need to provide a running commentary on everything she witnesses along the way. Those scenes show that the developers at least thought of the setting and context to the action, but in execution it’s ultimately too shallow to make anything that goes on in Blades of Time memorable.

Re-playing Blades of Time in 2019 is surreal. There are assuredly many better games from the previous generation of consoles that deserve to be on Switch ahead of this one. I can’t even imagine the developers have any hope of using this re-release to springboard the franchise back as they work on a sequel, because no one is going to want a sequel after playing it. Time hasn’t been good to Blades of Time, and and other than for the morbidly curious, I can’t see anyone being masochistic enough to derive any value out of it.