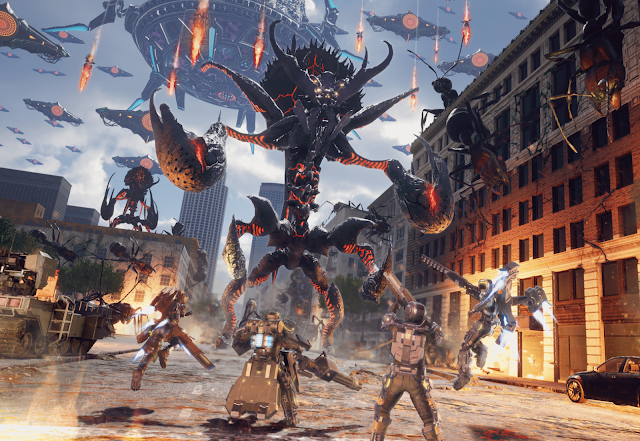 Giant alien spaceships and bugs have once again attacked the Earth and it’s your job as part of the Earth Defense Force to pick up arms and defend your planet. With plenty of weapons that are both realistic and completely absurd, you’ll either be heading out alone or with an actual friend to hit the battlefields in a fight for the planet’s survival.

Earth Defense Force: Iron Rain is the latest in the EDF series and unlike its predecessors, gone are the days of cheesy B-level horror film nonsense. Taking a more serious approach than the well known old school, Ed Wood-ian hijinks, you’ll be put into the role of a custom-created character, codenamed “The Closer”. Having stopped the bulk of the alien threat seven years ago, you’ll once again be taking up arms as the planet discovers that not only are the aliens still around, but they are back in force and there’s more of them than there are of you.

Iron Rain’s approach in the change of narrative was a welcomed one. The EDF series has always been a gameplay-heavy experience and while the fifth entry had just as much gameplay, it also had a a much-needed injection of substance through its narrative. Having finally given you a reason to care for what you were doing and the NPCs along for the ride, the mission-based structure has a much better flow as the changes in the scenario and of the locations finally make more sense than the seemingly random structure of yesteryear. The previous title, EDF 5, kept with the cheesy B-list horror movie approach and while it was fun, it was also truly cringeworthy.


Taking itself more seriously, Iron Rain is more War of the Worlds than Mars Attacks, continually reinforcing that humanity is locked into a fight for survival, and that things aren’t exactly going so well. No longer will you be fighting in London as the city falls. No longer will you be fighting on a military base being bombarded by pillars that spew forth countless hordes. Now, you’re fighting in the ruins of what’s left in order to protect who is left. The Earth’s population have been mostly been grouped into settlements with a “grade” of how important they are. The rich are still the most protected while the poor live in constant fear that you may not show up in time.

The narrative itself could have been entirely independent of the gameplay by keeping a serious tone while offering up the often at times bonkers mayhem that ensues once you hit the battlefield. Thankfully, the developers have hit the right notes here. The gameplay is still right on the ridiculous side of things, but a radio announcer that chatters on through the combat makes sure that it never really drifts from the serious tone that was set out in the opening sequence. It’s not aiming for truly dark, and there are plenty of humorous moments, but what simulated military action thriller would be complete without a few of those? The point is that the jokes come from mates that have been together through thick and thin and it comes across as humour as a survival mechanism.

The gameplay itself is at the best that the series has ever had. The controls never feel clunky and improperly aged. Even while the series took good solid steps forward with EDF 5, Iron Rain is something else, feeling like a brand new system that was designed from the ground up to do away with the more archaic ideas that the series was still holding onto. One example is the independent (and limiting) class system. Now, instead of picking a class to use on the field of battle that often feels restrictive because you’re locked out of particular weapons, you can instead choose the loadout that works for you. 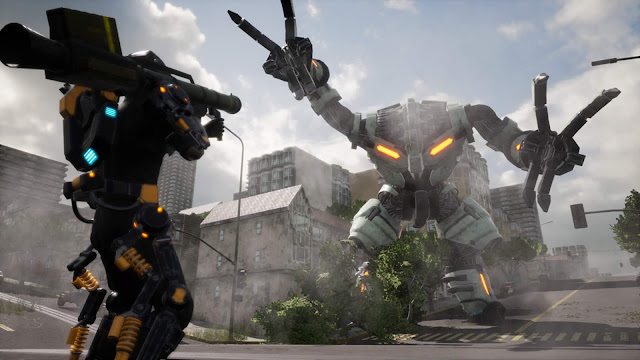 Whether it’s standard attack gear, flight gear, dual-wielding tank with a phalanx like shield, omni-directional maneuver gear, or whichever other mix you might, they all work as smoothly as you could hope for. That’s not to say that you’ll be invincible, as each loadout is cleverly designed to make its weaknesses a worthy challenge. Flight gear can only take you airborne for so long before overheating and requiring a cooldown period, basically leaving you quite vulnerable. Rushing around wielding two identical weapons for maximum damage increases reload time as you have to reload both weapons, multiplying the reload times by two. You’ll learn to adapt to your various situations though, and Iron Rain makes sure each and every option is enjoyable without being invulnerable.

Also gone is the more archaic way in which you add to your character’s health gauge and pick up new weapons. Before you had to physically move over to various crates labeled for new weapons or health upgrades. With Iron Rain, upgrading your health and weaponry is as easy as buying the next level up with the money that you receive for successfully completing a mission, as well as the crystals that you’ll pick up along the way (and are nowhere near as irritating to grab as the crates). To keep things simple, the crystals that you pick up in a mission are colour coded into four different colours. Blue comes from beasts like giant ants or spiders, yellow comes from metal foes like ships or hulking mobile looking suits and red comes from very scary fire throwing… aliens.

Earth Defense Force: Iron Rain is the perfect addition to the series. Earth Defense Force 5 made improvements but it still felt like it was slavishly committed to the way earlier EDF titles operated.  Iron Rain is different. It finally taking itself more seriously, which may or may not resonate with every player, but the end-to-end revamp in the way the game works on every level is exactly what the series needed to keep pushing forwards.