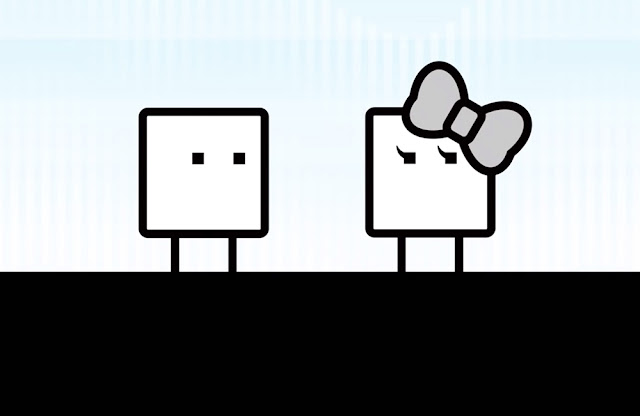 I’m sure I’m not alone in thinking that 2017’s Bye-Bye BoxBoy! was meant to be the final game in the series. After all, this was the third game in what Nintendo kept referring to as a “trilogy”, and one with a definite air of finality about it. But I’ve never been happier to be wrong. With BoxBoy! + BoxGirl!, the little series that could breaks onto the Switch, and it’s every bit as charming and ingenious as it ever was.

As the title suggests, there are two heroes this time around: Qbby returns from the previous games, but he’s now accompanied by the “BoxGirl”, Qucy. With her arrival comes a new co-op mode, which sees Qbby and Qucy working in tandem—at the hands of either two separate players, or one player switching between characters—to get to the end of each together.

But first, let’s get to the basic of what makes BoxBoy! tick, since that underpins both the co-op mode (“A Tale for Two”) and the single-box mode (“A Tale for One”): as either Qbby or Qucy (or both), the goal is to get to the end of each level by using the pair’s unique power to generate boxes that can be used as platforms, as weights for switches, or even as a sort of grappling hook. You can’t just spawn them willy-nilly, though—each level has a limit to how many can be created at once, and they have to be connected to one another to form a tetromino-like pattern. 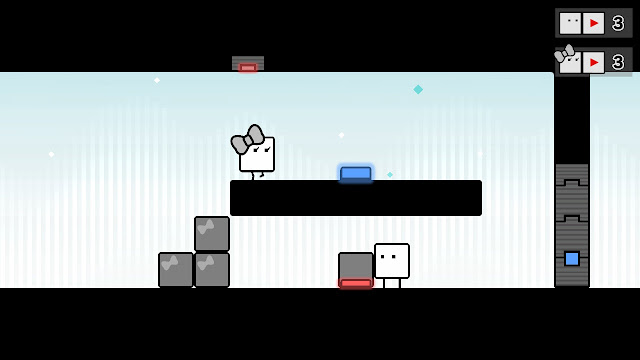 Things start of simple: use a couple of boxes to create a bridge over a row of spikes, or to build a set of stairs up to the top of a ledge too high to reach just by jumping. But with each new world, a new mechanic gets introduced, ranging from simple lasers (boxes work great as shields) to gravity fields that can be navigated only by pushing against walls, floors, and ceilings with a newly-spawned box.

Qbby and Qucy’s regularly gain new abilities, too, like the “Up Hook”, which lets them pull themselves from one end of a set of boxes to the other and thereby climb ledges, cross large gaps, or snake around lasers. This was a feature of Bye-Bye BoxBoy! too, but aside from the Up Hook, none of that games abilities reappear here—they’re all new, and bring plenty of possibilities with them for the creative, clever puzzle design that this series does so well.

All of the above is true for both A Tale for One and A Tale for Two, but it’s the latter that really sets BoxBoy! + BoxGirl! apart from its predecessors. The basic concept remains the same, but the difference in the co-op mode is that neither character can get to the end alone; they simply don’t have enough box power to make platforms big enough or stairs high enough to get where they’re going, so they have to combine their powers. Some levels take this idea further, splitting the pair up and tasking them with guiding each other forward by activating switches for one another. Sometimes they’ll use one another as platforms, or carry one another safely past obstacles, or shield each other from lasers, or push each other through zero-G fields, or daisy chain their Up Hooks… every new wrinkle found in A Tale for One takes on a new life in A Tale for Two. 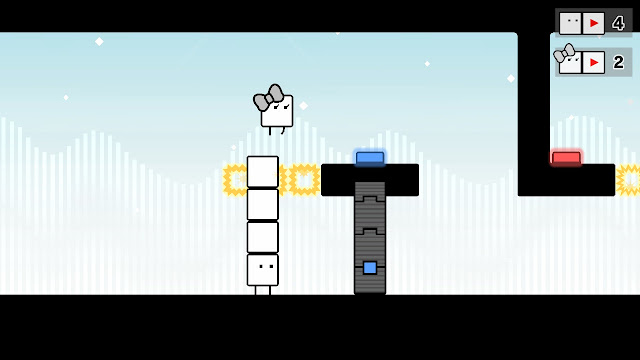 Another neat new feature this time around is one purely for the score hunters and perfectionists: targets for maximum boxes spawned. Each level has three different, progressively tighter targets for how many boxes you can use to finish the level; get under one of those targets, and you’ll get a few extra tokens for buying bonus cosmetic items. Between those targets and the handful of Crowns to be found in each level—typically in hard to reach places that require a lot of lateral thinking to get to—there’s plenty here to challenge even the most seasoned puzzle game champion.

On the other hand, just getting through the game is a relatively chill, relaxed experience. Notwithstanding the optional stuff, none of the puzzles are excessively trying, and even if you do get stuck, hints are readily available to give you any solutions that elude you. These hints cost tokens (a different type than those used for cosmetics), but they’re plentiful enough that you could treat hints as a full walkthrough have still have plenty to spare. BoxBoy! + BoxGirl! isn’t interested in just sticking up walls—if you get stuck, there’s always help at the ready. 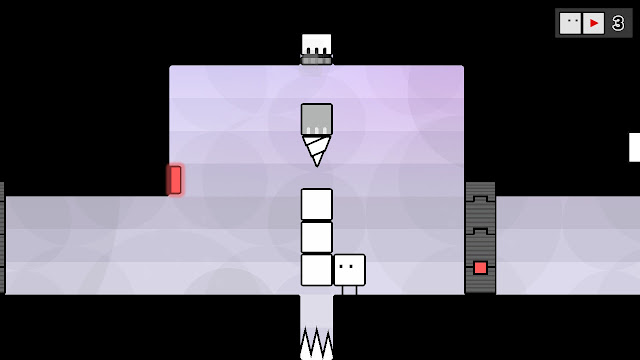 That’s a good thing, too, because BoxBoy! + BoxGirl! tells a beautiful, minimalist story that can appeal to everyone. Like everything else, it’s brilliance is in its simplicity: the box people’s home planet finds itself attacked by a strange black fog that’s seemingly turning people to stone, so Qucy and Qbby set out to find the cause and stop it. That’s pretty much the extent of it, but the wordless exchanges between characters and the surprising conclusion wind being far more emotive than you’d expect. BoxBoy! + BoxGirl! is proof that you don’t need thousands of polygons and endless dialogue to tell a poignant story that tugs at the heartstrings.