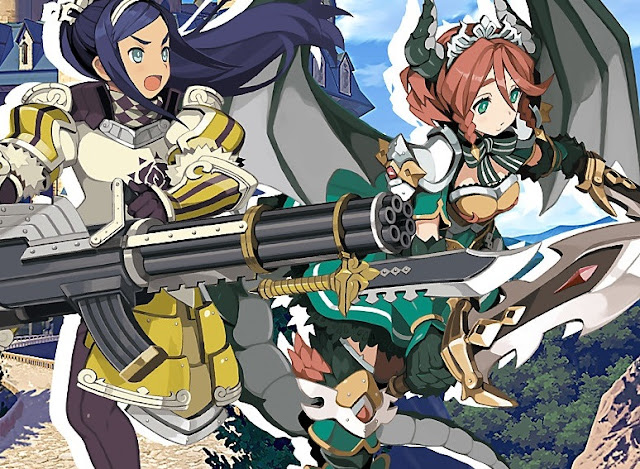 Do you remember Ogre Battle? Probably not. Back before it was absorbed into the mega-beast that is today’s Square Enix, a humble little company called Quest produced two Ogre Battle titles, one for the Super Nintendo, and one for the Nintendo 64. These games were a delectable mix of real-time strategy and JRPG, where you’d form small units of characters pulled from the furthest reaches of fantasy, and then direct these squads around maps to take on an equally vivid range of enemies. Each map would have a number of sub-missions on the way to the final, grand fight with a boss to “conquer” the whole thing.

I mention Ogre Battle because The Princess Guide could easily be seen as a spiritual sequel to that franchise. And, as someone who feels a strong rush of nostalgia at the slightest mention of Ogre Battle, I found myself more than willing to forgive all of The Princess Guide’s issues for the wonderful core sitting underneath it.

It’s not entirely the same as Ogre Battle, of course. When units met in battle in the Ogre Battle titles, combat would play out in a turn based fashion. With The Princess Guide, battle takes the form of short bursts of Gauntlet-style action JRPG action. You’ll take control of the commander of the unit, and the squad behind you will go about their job battling enemies, as you contribute with your leader’s special attacks and abilities. These bursts of action are generally over quickly – as few as a few seconds in some instances, and even the most extended melees only last a minute or two, but they’re certainly pacey and a far cry from the cerebral action of Ogre Battle’s combat system. 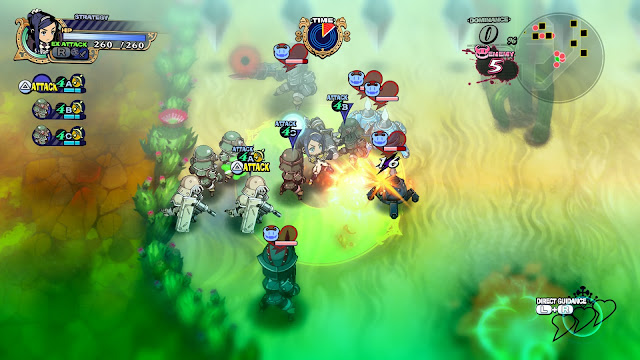 However, when you’re not mashing down on monsters, The Princess Guide behaves in a very similar manner to its spiritual predecessor. On a world map, broken down into a series of nodes, you can dispatch any units that you might have around the place, be it to collect treasure, take on enemies floating around the place, or tackle the missions and sub-missions to progress the plot. Just as it was with Ogre Battle, it’s such a joy to watch your carefully recruited and curated units spreading out across the map, dealing with different challenges and leveling up as they go along. There is a great variety in heroes to recruit, and soldier units to assign under their command, so The Princess Guide has a surprisingly decent amount of JRPG-style strategic depth sitting under its button-mashy combat. And, additionally, it’s a delight to watch your forces grow and become powerful according to your vision – there’s enough in there that no to players will approach the game’s challenges in the same way.

Where The Princess Guide deviates from its spiritual predecessor the strongest is in the role of the princesses themselves. You’ll have four different princesses to choose between, and each one will form their own unit on the battlefield. Beyond being the most important “piece” that you’ve got on this particular chess board, the princesses also look to you for guidance on how to lead. This manifests itself as the need to “praise” or “scold” them based on their actions on and off the battlefield, and that will lead to the princess gaining permanent improvements in her abilities.

You’ll also need to “praise” or “scold” through parts of the narrative, with your decisions having an impact on how the story plays out. Putting aside the implications of infantilising the princesses, and having domination over them through this system – and the unpleasantness of that if you think on it for too long – it’s a good, simple system that gives you control over both the narrative and character development, without being overbearing with the decision trees. The princesses tend to have interesting reactions to being praised or scolded, too, which makes for some really out there characterisation. 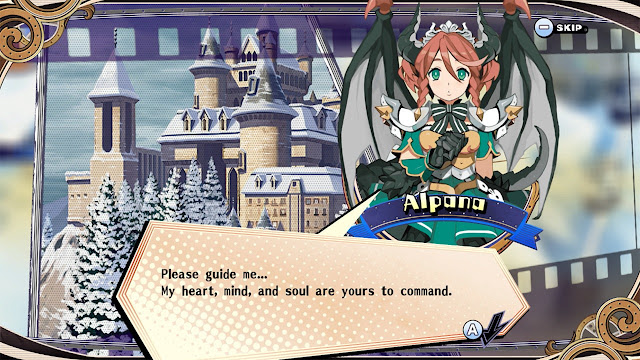 In fact, the personalities of the four princesses are so quirky in their differences that this is one of those rare games where I’ve enjoyed each and every character. It helps that there’s all drawn so well, too. The Princess Guide is a vibrant game indeed, and while it teeters on being gaudy with the way it uses such rich colours, and the animation of characters as they speak gets close to being irritating in how hyper they are as they wobble around (it has to be seen to be believed), the stylised aesthetics land just on the right side of being distinctive and original. The same goes for the in-stage combat. Enemy sprites are large, and well animated, and the fireworks from having so many units on both sides clashing gives the game some great energy.

Unfortunately, that’s also the source of one of the game’s issues; because there’s so much going on on-screen during the combat scenes, it can be difficult to keep up with it. More than a few times I would wonder why the combat victory screen wasn’t popping up, only to realise it’s because there’s an enemy buzzing around in the background and draining some of my side’s precious health. It doesn’t help that the AI of your allies tends to be poor and they will often stand around and ignore the enemies, even after directing them to go fight.

That irritation is manageable, and isn’t enough to actually ruin the game, but the complete inability for The Princess Guide to actually explain how to play it may ruin the experience for the less patient. It’s not that the game lacks for tutorials, because it has them. It’s just hopeless at explaining many of the features; for example it took me a while to clue into the fact that I could have multiple units roaming on the main map at the same time, and I was a fair few battles in before I realised that the ability to improve my princess’ statistics was tied into making full use of the “praise” and “scorn” commands in battle. The Princess Guide isn’t a straightforward button masher, and it must be difficult to write tutorials for complex games, but the misfire here does mean that the game is alienating until you’ve worked out many key features for yourself. 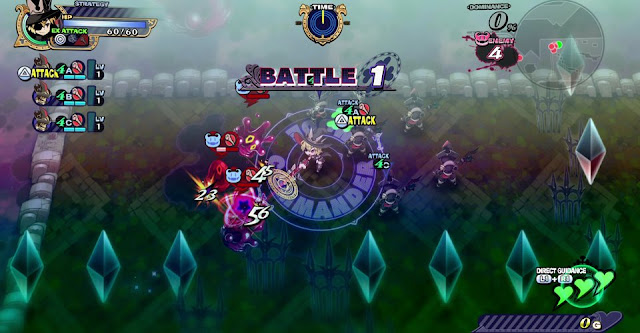 It’s worth it, though. The pacey, stylish, and colourful action, complemented with the neat strategy elements and interesting – albeit high-energy narrative, combine to make The Princess Guide quite unlike the other JRPGs out there. As I said at the start – it most closely reminded me of Ogre Battle, crossed with the action of something like Gauntlet. That’s a combination that may be incredibly niche, but it’s also fresh, different, and above all, interesting.

God Wars is coming to PC