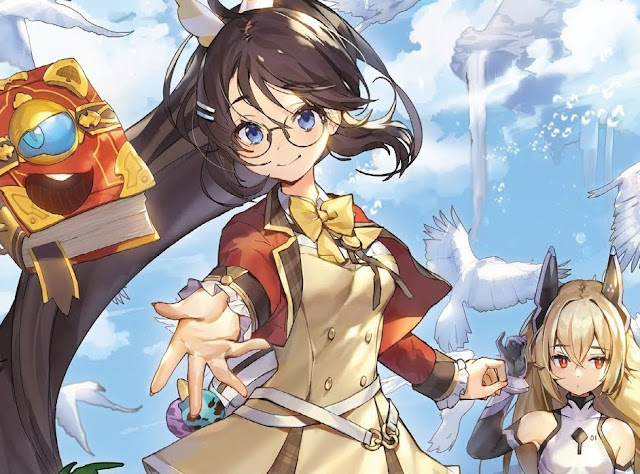 RemiLore is a game that unfortunately I do not have the patience for. South Korean indie outfit Pixellore brings to the table a top-down beat-em-up with a JRPG flavour, that weighs a little too heavy on the grind and a little too light on the substance. There’s nothing inherently wrong with the game – everything functions the way it should, there’s nothing offensive or broken – but the longer you play, the less joy it will bring. Rather than creating a fantasy world of possibility, like the title suggests, the world of Ragnoah draws too much inspiration from games before it, and as a result, never finds the unique identity that a game needs to stand out on the Switch eShop.

The gameplay follows Remi, a student who discovers a dusty talking book in the basement library of her school – this is Lore, a tome which chucks our hero into an alternate world filled with mecha-monsters. The plot is lighthearted and not without its twists and turns, but a real standout is the Japanese voice-acting for every scene, including the banter in between dungeon rooms. Both Remi and Lore have a good amount of personality, and while the unwitting-hero-and-their-smartmouth-book trope has been done a few times already (re-release NieR-not-Automata already, Square Enix), it’s a great way for Pixellore to keep the player’s attention.

The gameplay will be familiar for most action fans – it’s more of a beat-em-up than a JRPG, boasting a light/heavy attack system that branches into combos. This will feel comfortably familiar for fans of anything from Dynasty Warriors to Bayonetta, but RemiLore’s top-down perspective and simple gameplay doesn’t explore the depth available to this system very well. There are no options for juggles or animation cancelling, but most of the combos also fulfill very similar strategic purposes. Remi has access to a quick dash which needs to recharge over time, and Lore can support with a variety of offensive or supportive magic spells. 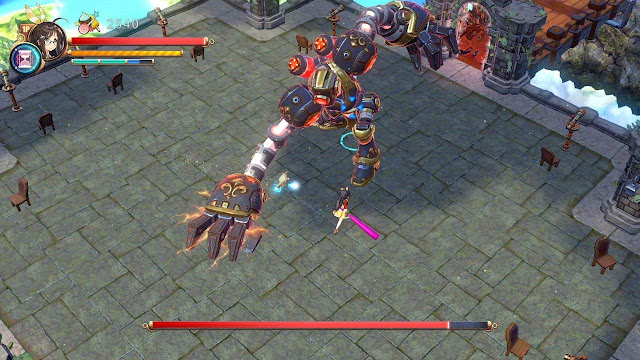 The enemies also follow simple attack patterns, and are easy to keep locked in a stunned state, such that they can’t counter-attack. There are the standard melee and ranged mobs, with well-designed animations and choreographed attacks. There are also the occasional “big” enemy who isn’t so easily stunned, requiring you to dash in for a few hits before dashing out to dodge the counter. It’s rare that this game plays out as anything more complex than a button masher.

The game’s procedurally generated gauntlets rarely conjure up anything remarkable. There is good enemy variety, but they often get clumped into the same blocky rooms, tasking the player to hunt them down and smack them with whatever weapon they have equipped. Mecha-monsters drop desserts when defeated, which can be used to upgrade Lore’s magical abilities and slightly improve loot drop quality. A real letdown however is a lack of checkpoints between levels – the game is broken up into worlds and each world is made up of three levels, and a death or quitting midway will send you to the beginning of the world. Be prepared to fight through the same kinds of rooms over and over.

The high point for me was definitely the boss encounters, which has the player fighting a big enemy with intricate attack patterns. It is here that the game’s dodge, attack and magic systems start clicking into place, and where the difference between a quick and a heavy combo will matter. Unfortunately, there are so few bosses, and they are kept apart by so much monotonous dungeon crawling, that you’ll really need to savour every interesting fight the game throws at you. 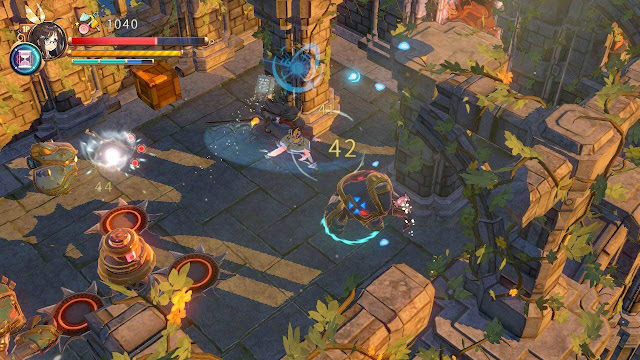 I’ve mentioned monotony a lot so far, which is generally not a complaint which could be levied at a procedurally generated game like RemiLore. The problem here is that, although there is a lot of potential stuff in here, much of it ends up falling into the same patterns. Take the weapons for example – RemiLore has over two hundred individually modelled weapons, but they are split into seven weapon classes that need to be unlocked as you progress through the game. The first class available to you, one-handed swords, is an umbrella for everything from fire pokers, tennis racquets and anything else which could reasonably be held in one hand and swung. And each of the weapons in a weapon class consists of the exact same light/heavy attack patterns, with the only difference being slight numerical stats and what spell they allow Lore to cast. Since you can’t carry more than one weapon at once anyway, there’s very little reason to care what you pick up.

Combine the uninspired enemies and level design with a checkpoint system that’s more than happy to erase half an hour of progress if you die midway through a run, and you’ll find that RemiLore becomes a game that’s more tedium than fun. It would have been perfectly serviceable earlier in the console’s lifespan – this game is, if nothing else, an effective way to kill time – but now that it’s vying for attention over proper dungeon crawlers and more technical beat-em-ups, RemiLore just doesn’t have anything unique enough to stand out.