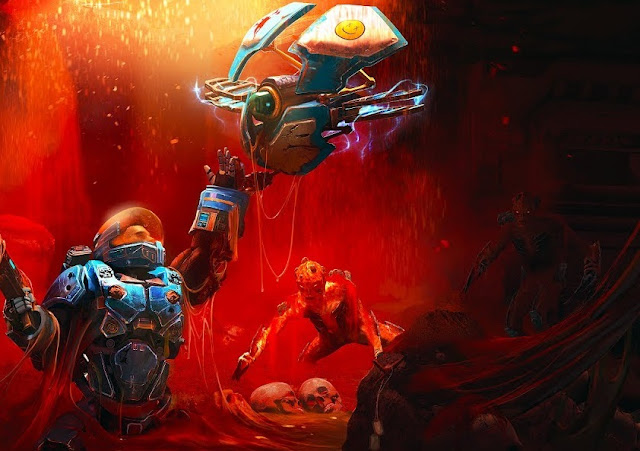 Aliens (the film) has been responsible for a great many video games. Ever since James Cameron’s pioneering blend of science fiction, sheer terror, and hard action captured the imagination of film audiences, there have been umpteen efforts to capture into games that aesthetic and theme of one hardened military hero (or a small squad of them), squaring off against swarms of biological weapons.

Related reading: It’s hard to look past Alienation as the very finest example of this particular genre at the moment. Our review

It’s easy to understand the appeal to video game designers. “Isolation” easily translates to cramped corridors and rooms, which makes the job easier for the level designers. “Hordes of biological weapons arrayed against the heroes” translates just as easily to the short, action-heavy loops that make for easy (but enjoyable) gameplay. Finally, science fiction is a setting that allows character artists and the like to get away with just about anything. Aliens is a neat fit for video games, in other words. We’ve seen some truly brilliant examples over many years now, from the seminal Alien Breed through to the recent Alienation. As you can probably imagine, there’s a lot of derivative trash as well. Solstice Chronicles: MIA isn’t trash, and works well on the Nintendo Switch as something for some great pick-up-and-play action on the game. But it is painfully derivative.

The best feature that Solstice Chronicles has to offer is the way it uses the hardware. These kinds of games are best enjoyed in multiplayer, where you can yell rudimentary tactics out at your buddy to make combating the hordes – and the bosses – that much more engaging. This is especially true when, like in Solstice Chronicles, there are multiple different classes of heroes to choose between, each of which brings different abilities to the team. Working together is genuinely good fun. With the Nintendo Switch, you do get that on the go. It’s not the perfect experience because the murky visuals combined with the zoomed-out isometric, top-down perspective make it easy to miss details or enemies, especially in the heat of the action when there’s dozens of them on (the relatively small) screen at once. Nonetheless, it’s very playable stuff. 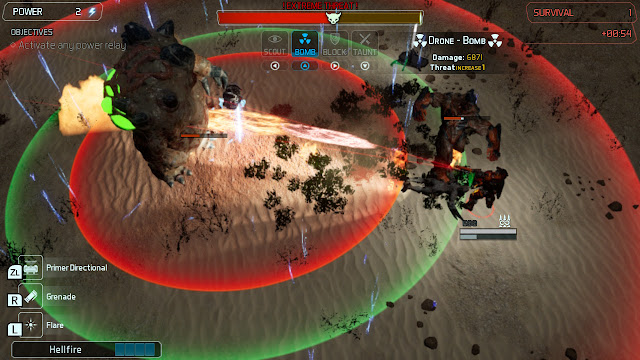 Between the story and endless modes there’s plenty of challenge to go around, too. Solstice Chronicles does work better in endless mode, where you’ve got the challenge of taking on huge hordes to the point where you’re inevitably swamped by alien flesh and can no longer see your avatar. Testing yourself to push on a bit further every time is what these modern-day Gauntlet-likes do best, and to its credit Solstice Chronicles’ endless mode offers interesting arenas with plenty of quirks that take the action beyond one slightly more powerful and numerous horde after another.

The other reason Solstice Chronicles is better in endless is the story mode’s narrative is dismal. It’s not just that you’ve seen the story that Solstice Chronicles offers before (many, many times). You certainly have seen the story many times over across cinema and gaming, but what really holds Solstice Chronicles back is how poorly it’s presented. Cut scenes are janky and minimalist to the point where you feel like you’re missing out on details. Because those cut scenes are meant to establish the characters and setting, their excessive brevity means that characters lack characters and the moments of banter between them comes across as cringeworthy. Almost every scene is some kind of terrible cliche as well. It even has the old “finally make your way to a human holdout only to find your commander covered in blood and just alive to point you in the next direction,” cutscene, but it’s so poorly performed that I can’t think of a game that has come across as less authentic (without using the Z-grade production values for comic effect).

Heck, the game’s story is set on Mars about a scientific facility gone to hell, and you’re a space marine with a gruff attitude. People. If you’re going to crib ideas for your story from Doom, of all properties, you need to at least elevate it as a storytelling experience beyond what the original offered. We don’t expect Shakespeare from this genre in particular, but competence, or at least self-awareness, isn’t too much to ask for, surely. 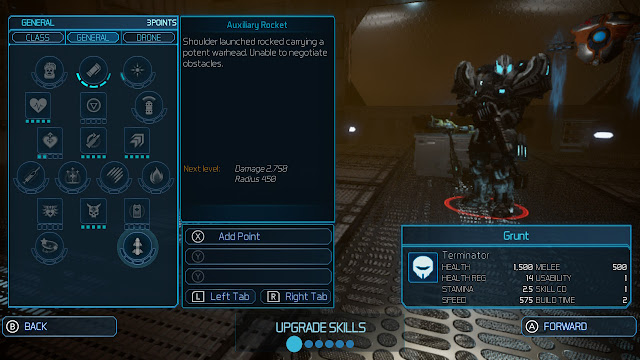 Solstice Chronicles is built around replay value, thanks to a rich upgrade system. Players can improve their own character’s statistics, the abilities of their little partner robot (who can taunt enemies to distract them, act like a bomb, and so on), or improve the tools and tricks they take into combat. That upgrade system means that no two players will approach the action of Solstice Chronicles in the same way, and while the button layout takes a while to get the hang of (for a dual-stick shooter, it’s a little too difficult to continue aiming and firing in a specific direction while activating those critical robot abilities and tossing grenades), but once you’re there, and can remember all the tools you have at your disposal Solstice Chronicles becomes much more than a standard point-and-shoot run-and-gunner.

For a game built around replay value, there’s unfortunately very few story missions. Instead, you’re expected to grind away with the same levels on higher difficulty settings to earn the points you need to level up your character. The endless mode, while the superior way to play, lacks for the kind of context needed to make you care about levelling up your character. The range of enemies to fight is also limited, and so the grind becomes uncomfortably monotonous far too early for the amount that Solstice Chronicles’ upgrade system wants you to play.

With few quirks, Solstice Chronicles is a well-made isometric shooter that effectively cribs an aesthetic that calls to mind a blend of Doom and Aliens. For local multiplayer fun, mowing down the hordes with a mate remains reliably good fun. A shockingly cliché and poorly-constructed narrative, combined with a sense of monotony that sets in far too quickly, does let this game down though. It’s best played in very short bursts, with big breaks in-between sessions.