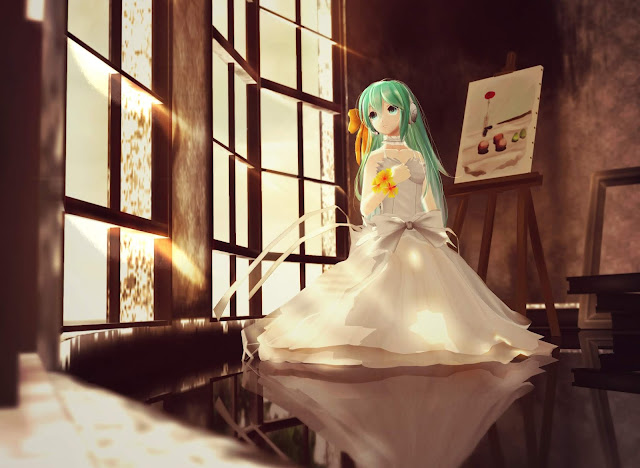 Late last year, news emerged that a man in Japan had held a wedding for himself and Hatsune Miku – as in, the vocaloid-cum-digital superstar that we all know well in video games thanks to the sublime Project Diva series. Because this story fed the “weird Japan” narrative that the western world just loves to indulge – racist undertones and all – it’s a story that has been running continuously since the wedding happened in mid-November. Case-in-point: CNN did a piece on it just after Christmas.

It’s important to understand that this isn’t a legally-recognised marriage. Japanese law doesn’t recognise digital celebrities as people, and therefore it’s not possible to legally marry them. This guy quite obviously loves Miku (I sympathise with that), but doesn’t derive any tax or welfare benefits from his marriage. So there’s no greater social or economic impact to the marriage (it also means that other people are quite welcome to have their own weddings to Hatsune Miku, if they so wish). That’s important context because the response from the overwhelming majority of people to the reports of this wedding, when it means absolutely nothing to Japan, let alone them in their lives, have been nothing short of pathetic, given that his choice, his wedding, and his infatuation with Miku are absolutely none of their business, and hold absolutely no implications for their lives, now or into the future.

Of course people have had opinions about this guy’s wedding, and of course they’ve ranged from insulting bemusement, to condescension, through to outright mockery. Here’s just a sample of the in excess of 2,400 comments on just the CNN story – in between the unending stream of mocking gifs (here’s a pro-tip, you’re not awesome or smart for posting those, ever) and the “time to turn the Internet off” throwaway comments:

I have 0 desire to mock this man. I feel tremendous sadness for him. There is great risk in truly loving another person-who has her own thoughts + feelings + decision making power-but it is in that manner of relationship you can both become far more than you are now.

Here’s a good example of those that are condescending to the point of bigotry. They’re basing their opinion on the idea that standard relationships between two people are the exclusive state of normal and healthy, and anyone who finds fulfillment outside of the norm must therefore be unhealthy.

It wasn’t so long ago that people who had mixed-race marriages, or LGTBIQ relationships, were seen in this exact same light. Indeed, despite the same-sex marriage legalisation or recognition in many nations LGTBIQ people still suffer extreme discrimination from many quarters from people who believe that “normal” is a relationship between a man and woman. Mixed race relationships experience some grief from people who seem to think people who don’t marry their own kind are some kind of traitor, albeit from a much smaller pool of bigots. It doesn’t stop there; for another example, people who choose to live without relationships continue to experience another form of condescending pity from people who can’t comprehend that perhaps a person finds fulfillment in life by being single.

Again; it’s all bigotry. What is “healthy” and “fulfilling” in life is completely subjective, and as such, there should be no baseline for “normal”. Yes, for most people, “fulfillment” is indeed a relationship with another non-digital person – be that of a different race or the opposite gender to their own, or the same. But others find fulfillment in other ways, and to “pity” those people for not living their lives the way you do is not only insulting, it’s bigoted and churlish.

Japan, we love you but y’all have got some serious intimacy issues.

There we go. The “weird Japan” narrative, with one person marrying Hatsune Miku somehow representing the entire Japanese culture.

Here’s the reality: the socio-economic environment of Japan is one of an aging and declining population, coupled with a high-pressure working environment, and it’s a culture that expects everyone to band together to shoulder the burden of looking after the nation. Brought together, this means that the Japanese people tend to be incredibly career and economics-orientated, and it’s difficult for young people to get involved in relationships in the first place. They’re simply too busy. It’s not that the culture has issues with how people interact with one another – including with regards to intimacy. It’s that people – men and women – are working too hard to have the time for relationships.

Because of this, a small percentage of people turn to looking to satiate their desire for intimacy through what is known as “supernormal stimulants.” Japan has a history of producing these through anime, games, pornography, and so on, and Hatsune Miku is just another example. It doesn’t result in a marriage or relationship (typically), but for those people, its satisfactory while they derive life fulfillment in other ways.

Those Japanese people that can find the time and have an inclination to have a relationship have no more issues with intimacy than people from anywhere else in the world. It’s flat out ignorant to suggest otherwise.

No one sent him for a psych eval?

Because of course being attracted to something that was creatively and scientifically designed to be attractive must be the sign of mental illness.

How shallow. What is he going to get out of that marriage? If a robot can comfort you out of the hardest times and lift you higher than you thought you could go at the best of times then those times weren’t really that good or bad to begin with and you’re just fooling yourself.

Putting aside the very real possibility that Hatsune Miku does give this guy a sense of comfort, according to the Twitter expert here, apparently the only value of a relationship is if your partner exists as some kind of mental wellbeing servant, and any relationship in which your partner isn’t subservient to your emotional needs must be a “shallow” one.

Other people were equally mocking that the relationship between this dude and Hatsune Miku wouldn’t produce children. If the production of children was somehow an intrinsic component of the value of a relationship, than any couples that choose not to have children (or simply can’t) must therefore be in inferior relationships. Now, as a person who is in a childless marriage, I know a lot of people do actually believe that, but hopefully anyone rational understands how insulting and shallow these perspectives on relationships are.

The thread of responses on that CNN tweet goes on and on, and there are very few genuine comments from people happy for this guy – a person none of them know, and therefore no one can assume that he’s not happy, successful in life, and a valued member of the community.

The reality is that attraction between people and digital characters (and/or robots) are going to become more commonplace. Holographic technology is getting close to being applicable to the home, there’s increasingly rich AR and VR technology that allows complex interaction with digital “people,” and developments in AI is allowing these interactions to become more nuanced. Of course romantic and sexual interactions will be a component of this evolving technology. It won’t be for everyone – of course it won’t. I’m absolutely obsessed with Hatsune Miku, with a collection of around 60 figures and dolls and more play time put into Miku games than anything else I play (by a very long way). Even then I’m perfectly happy in a conventional marriage and would never think to marry Miku even if I wasn’t.

Further reading: On the ethics of sex with vocaloids, robots, and digital characters

For that percentage of people who do find fulfillment in supernormal stimulants such as Hatsune Miku, however,  it’s important that people stop with the mockery. There’s no harm being done in this marriage to anyone, and while there would certainly need to be a debate about the legal implications and impact it would have on society to have these marriages actually recognised by law, no one – not even the guy that just married Miku – is asking for legal recognition.

Finally, those “lol Japan, you so weird,” comments whenever something like this happens need to stop. Even if one person was representative of a population of 100 million, if you think Japan is strange, or the Japanese culture is weird, or funny, or not “normal,” you’re a racist and a bigot and you really, really need to take a look at why you have a value system that allows you to look down on another culture to the point that you find it funny and refer to the culture in pejorative terms. Japan stops being “different” after spending around a month living within it, and your utter ignorance of a country and its culture says more about you than it does them.

Revisiting Proteus and a retrospective on 2018