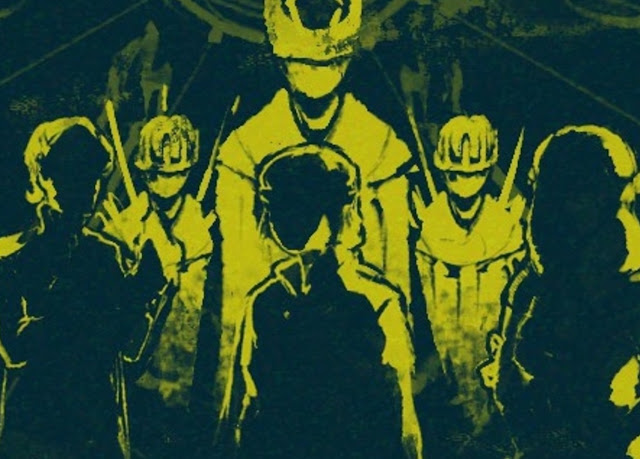 The Shrouded Isle is immediately appealing because of the aesthetic. Like the yellowed pages of a book from antiquity, the deep sepia tones, combined with the promise of a dark narrative of sacrifice and worship, is very hard to ignore. The actual game isn’t even remotely what I expected going in, but what it is, is very worthy indeed.

This is, effectively, a single player board game, which challenges players to maintain a balance between a large number of competing interests and demands. The basic run of it is as such: You play as the head of a dank village of five families, and need to sacrifice one member of one family every season in worship of a dark, Lovecraftian-style deity. You need to spread the sacrifices around, though, because families don’t tend to like losing members unless you can prove they’ve committed some grievous crime, and you’ll often not be able to do that. If you annoy any one family too much, they’ll riot, and it’s game over.

At the same time, you need to keep the village in spiritual order. Each family is tasked with maintaining one “trait” that is critical for maintaining cohesion in the town (making sure everyone is disciplined, pious, fervent in worship, and ignorant), and so, each month you need to task one person from each family to complete tasks, which will boost one or two traits at the expense of one or two other traits. If any trait falls too low, it’s game over; the people will no longer tolerate you as their leader. 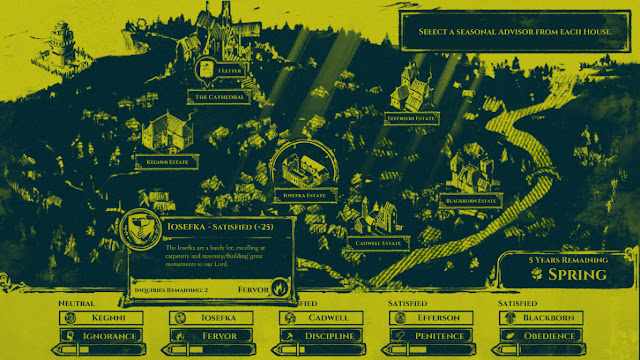 Each person within each family has different virtues and vices, which can further affect how the town’s traits are maintained. Beyond being concerned for the morale of the village, this is the other reason that you need to be careful about who you go about sacrificing; get stabby with the wrong villager and you may lose your most effective preacher or inquisitor.

Further complicating your work is the god that the village is in thrall to. It’s a demanding thing, and will require you – via cryptic messages – to suss out a particular sacrifice that it wants. And then there’s the mental diseases. As you can probably assume, actually living in this town is a pretty stressful, dour, miserable experience, and various villagers can start demonstrating mental instability. You can lock them up in a special tower and “research” ways to cure them (the mind can only imagine the screams that must come out of that place), but doing that means you can’t use them (or sacrifice them) for a couple of seasons.

As you can imagine, there’s a lot to balance here. What’s most impressive about The Shrouded Isle is how effective it is at using these mechanics to build tone and theme. Mechanically, what you’re doing here isn’t that different to hundreds of other management games. In fact, the systems here are effectively the same systems that drive so many Japanese dating games, or even something like Summer Lesson. The differences in tone couldn’t be more different, however. 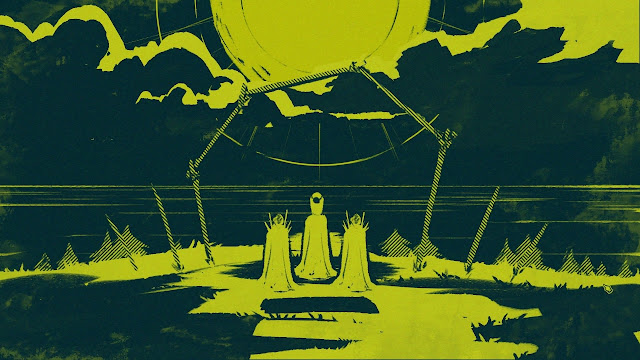 For one thing, The Shrouded Isle is brutally unforgiving. There’s no difficulty settings, and the engine has a propensity for delivering more negative results than positive, when there’s random chance at play. In other words, your villagers will tend to get “average” or “poor” results in their tasks more often than they get “good” results. Coupled with the declining population from the sacrifices, and a smaller range of “virtues” to help counter the town’s vices, and The Shrouded Isle feels like a desperate fight against extreme attrition. Moody music and that aesthetic only accentuate the grim abject horror further.

It was a stroke of brilliance on the part of the developer to make the setting an island, too. An island is isolation, and that sense of being cut off from the world is critical to The Shrouded Isle’s theme. When you think of other great examples of the modern gothic – Nick Cave’s The Carny or And The Ass Saw The Angel, the television show Carnivale, or Lovecraft’s own Shadow over Innsmouth, the horror comes from the way it places all the action in an isolated space, and one in which humanity is overwhelmed by the natural world. The environment itself is the character, protagonist, and storytelling vessel in The Shrouded Isle. Each villager within town has a brief sentence or two to describe them, and every so often there will be an event in town where you’ll get a fleeting glance at one of these characters – a woman will find herself mysteriously pregnant, for example, or a hapless sailor will wash up on shore and your inquisitor wants to… get information… from him.

Those bits of character building are only fleeting, however, and it’s deliberately difficult to remember names and faces. The aesthetic engine only provides blurred portraits that look like they were taken on the Game Boy camera from back in the day. This is partly because you’re meant to see them as resources for labour and, eventually, sacrifice – livestock, if you will. It’s also because the palpable menace that surrounds the island and looming God-mandated deadlines are what is really pushing the narrative and events forward. That’s the real protagonist of this suffocatingly claustrophobic little world and story. 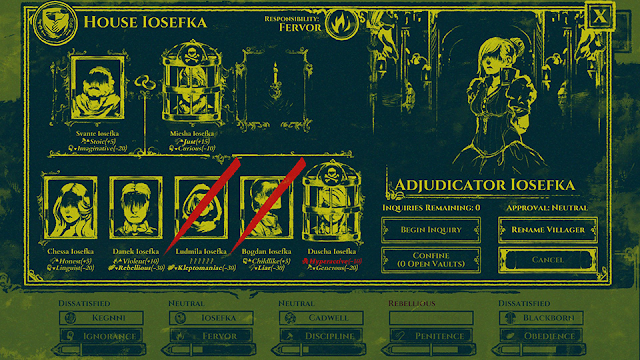 I wouldn’t necessarily say that The Shrouded Isle is particularly fun to play. It’s far too easy to snooker yourself with one or two wayward decisions that don’t become obviously bad choices until an hour’s play down the track. The difficulty is certainly appropriate to the kind of game that The Shrouded Isle wants to be, but it’s also so relentless that actually getting through to the end provides closer to a sense of relief than achievement. Indeed, the game often feels like it’s playing you rather than the other way around, and success feels like it’s on the game’s terms rather than any particular level of skill you might have.

Finally, the developers haven’t been particularly forthright with information. There’s no tutorial or gameplay explanation, so you’ll be floundering for a few attempts as you learn how to play through trial-and-catastrophic-error. Even once you’ve got the mechanics down, as a side effect of the stunning aesthetic, the game isn’t particularly efficient or effective in sharing information. This is particularly true when trying to follow the precise impact of each worker that you assign to a project will have on the town’s overall traits. For a game that is so grimly attrition-based, slight variations in the numbers running in the background can have major impacts on your ability to survive, and the game makes it far to hard to fine tune your strategy.

All being said, The Shrouded Isle is so razor-focused on its darkly original theme that it comes across as quite brave. This isn’t a necessarily uplifting or relaxing game. Nor is it particularly rewarding. It is, however, genuinely clever with how it works within an established genre, and it’s uncompromising in its vision. We need more games that are willing to do that.