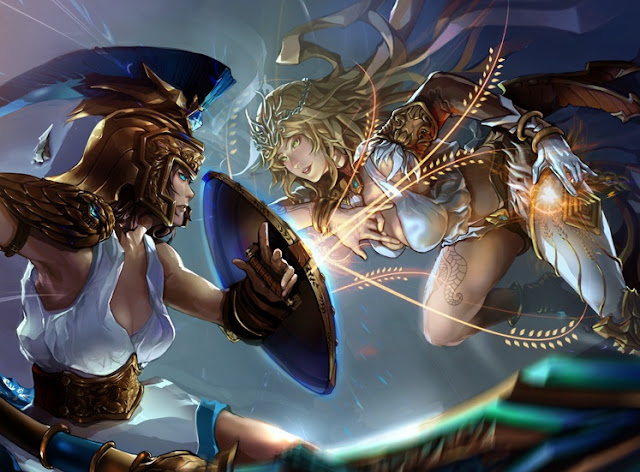 On the one hand, Fight of Gods his hilarious. The very idea of pitting Jesus Christ against Buddha, or Santa Claus (hilariously the “God of capitalism”) against Amaterasu, Shinto’s highest goddess, is such nonsense, and the game knows it, and runs with it. Sadly, on the other hand, this game is terrible.

It plays a little like Mortal Kombat did a couple of generations ago, with janikly-animated characters stuttering back and forth across the screen, with looped animations that transition between one another horribly. A good fighting game should flow, and as long as it does that, even if there are relatively few special attacks and mechanical features, the game is enjoyable to play. Fight of Gods gives each character a sparingly few attacks, and then fails to get any sense of flow to the fighting. At a time where the fighting game genre is particularly competitive, this game relies far too heavily on its gimmick to grab attention.

Luckily, the gimmick really is that good. Jesus Christ breaking himself off his cross, and then using the bits of wood tied to his hands as bludgeoning weapons, is funny in a way that never gets old. Santa Claus’ big special attack is to summon his sleigh, reindeer and all, to crash across the screen. Buddha’s prayer poses take on a wholly different dimension when used to deadly effect here. The roster of Fight of Gods is relatively thin by modern fighting game standards, but they’re drawn from Christianity, Buddhism, ethnic religions in China and Japan, and old mythologies such as Egyptian, Greek and Norse. Each and every character has a personality and presence that is comical in simply existing, and they’re all fun to mess around with.

Proof that Shinto is the superior religion to Christianity >_> #NintendoSwitch pic.twitter.com/PEj3zXOLZz

For a game that many assumed would be offensive, and many claimed was deliberately attempting to offend, Fight of Gods is remarkably inoffensive. The developers have wisely stayed away from depicting figures that are genuinely sensitive (there’s no Muhammad, for example), and a near complete absence of any attempt to provide a story or context to the action means that the game’s under no danger of pulling characterisation faux pas or giving players something to potentially interpret as ideology. By the time you get to the final battle in the arcade mode, and realise that the big enemy in Fight of Gods is a blank character called “Boss,” you realise that the developers have gone out of their way to go with self-deprecating humour in order to minimise the chance that a player will come away from this upset.

Sadly, there’s almost nothing to Fight of Gods. There’s an arcade mode, which is a standard string of battles on the way to the fight with Boss. There’s also a versus mode to take on human or AI opponents, and that’s about it. There’s no survival mode, no score attacks, and no leaderboards. Playing through on higher difficulties gives you new costume colours for the characters, but the potential to deck them out in really wild stuff seems to have been ignored (again, one assumes to avoid the risk of causing offense), so as a “prize”, it’s quite tame.

While the features might be limited, it’s not that Fight of Gods lacks for effort. Each character has an environment suited to them or their religion. Jesus’ arena has the garden of Eden in the background, while Adam and Eve watch on. Amaterasu’s battleground has torii gates. Santa’s home is – surprise! – chilly. These backgrounds are pure window dressing, but demonstrate that the developer has a strong sense of aesthetics and plenty of talent in there. Character designs are great, too, despite the poor animation standards.

Jesus is a badass. #NintendoSwitch pic.twitter.com/r94GoQupYr

No, Fight of Gods’ issues have nothing to do with intent, talent, or ambition. This is simply an example of a team that tackled a notoriously difficult genre on a razor-thin budget. The complexities of powers fighting games; the physics engines, making hit boxes work, and responsiveness, all require a level of precision that make the fighting genre a brave, or (more accurately) foolish one for an inexperienced or under-resourced team to tackle.

What I will say, however, is that the team has nailed the balance between characters. No one character seems to be particularly overpowered. Fight of Gods will never be a competitive fighting game for the other reasons mentioned earlier, but two people that go into it with the right sense of humour can spend plenty of time messing around with all the various character combinations, without having to deal with a frustrating sense that they should only be playing as one of them.

More than anything else, Fight of Gods feels like a proof of concept. The developers have the talent, and have clearly had fun with running with this original, entertaining idea. It’s an idea I hope they build on, because esports has absolutely ruined fighting games by making them all so damned serious and competitive. Even Koei Tecmo (Dead or Alive) and Nintendo (Smash Bros) have lost sight of the fundamentally absurd nature of fighting games a bit, in chasing after the lucrative “competitive” scene. I’d like to see another Fight of Gods, with improved development competence, but something that is also still happy to be an absurd, irreverent bit of fun. We need those games too, else what would we have to play by the time we got to the second bottle of wine?