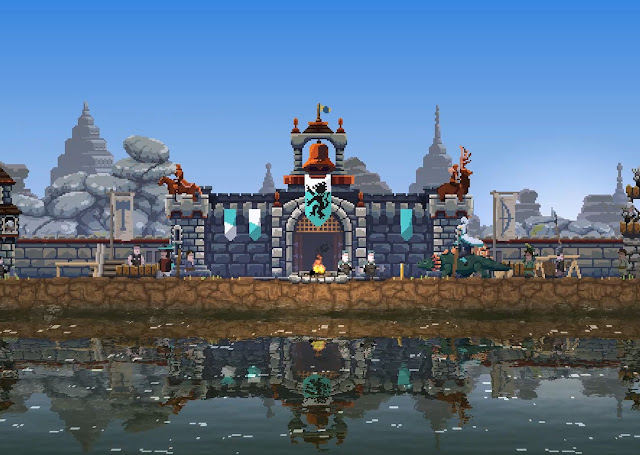 Kingdom: Two Crowns is a 2D rogue-like base-building and defense game with quaint, well-animated pixel art and an overall minimalist presentation. It’s a sequel, and as the title alludes to, one of the biggest new features is that it includes cooperative multiplayer functionality. It looked very familiar to me at a glance seeing it in the Switch store; sure enough, I had seen its predecessor before, Kingdom: New Lands, and only went as far as putting it on my wish list. With my interest fully piqued, I decided to take the plunge into this brave, pixelated world as a newcomer to the series.

The purist in me said to go in blind, and I did. With only the ability to move, drop and spend coins/gems, there’s not a whole lot of direct interactivity, so it seems easy to learn, but the trick is learning how all the mechanics work and how your subjects’ AI works. For example, you can’t order your builders to flee during monster attacks at night, but you can drop a coin for each incoming demon, which they take and retreat. This might be useful in a case where you, say, need to build fortifications far enough away to secure yourself some farm land for renewable income. Ah, but there’s the rub – you may need to demolish campfires or even trade outposts to get to it. You’ll learn quickly that overexpansion, especially early on, can be your kingdom’s doom. It’s engaging, challenging, and certainly strategic, and though at first the idea of a “2D strategy/ city builder” seems limited, it doesn’t take you long to realise that it’s not limited in the slightest.

I have two main criticisms of the game: the first is that the pace is pretty slow. For a strategy game, that’s usually not an issue for fans, but people who have less experience with the genre might find this a hill to climb over from the outset. And if that doesn’t get the less experienced good and frustrated, the second issue will; there is very little explanation for the game’s mechanics, and some of them are counterintuitive. 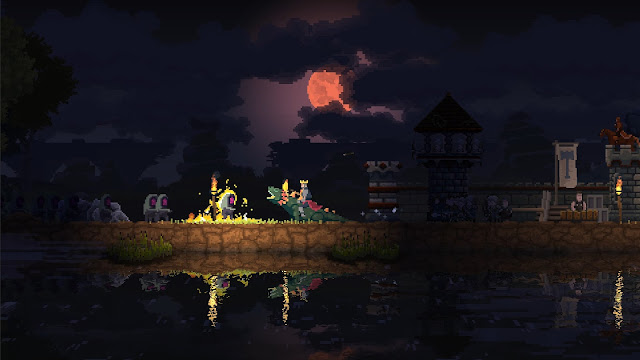 For example,I made the mistake most fresh lords and ladies seem to make, which was cutting the forest down too early and expanding. This wound up destroying encampments that generate people you can pay a coin to in order for them to become your vassal and grow the population of your city. My first thought was that they would continue to generate as part of my kingdom–this is not the case. The same goes for the trader’s outpost, the guy that appears at your center area and costs one coin to come back in a day to give you some coins, who will disappear if his return point is “expanded” onto. When these kinds of things happen, the kingdom is effectively doomed and you’ll need to restart. It’s all a learning experience, but some kind of guide to new players could help prevent the first ten or so attempts at Kingdom Two Crowns from becoming frustrating.

Once you get past some of the early-game confusion, there’s even more confusing and unexplained mechanics going on, but you’ll be better equipped to handle those, as by then you would have learned from the early game is to take your time. And build lots of bows. More than you think you need.

Kingdom Two Crowns plays out entirely from the perspective of the leader, sitting on the back of their horse. Their scope of vision (and therefore yours) is limited to their immediate surroundings, with two zoom modes available in options, but they’re not much different. Given that enemies can attack your kingdom from both sides, this can be a problem. There are no clear warnings when your fortifications have been destroyed. There are no immediate notifications for, well, anything going on outside of your personal field of vision. And, again, the game’s lack of clear information often makes the stuff inside their vision confusing too. You need to piece together what various shops, buildings, and characters do from the visual symbols and designs that represent them, but it’s just not always clear. When the questions far outweighed the answers, I reluctantly turned to the Internet to answer them, which of course feels a bit like cheating. 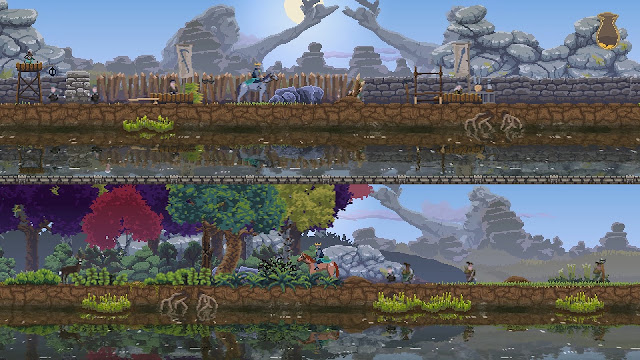 But I did so because I wanted to look it up. While I was enjoying scratching at this game’s surface, I felt I was doing just that, and I wanted more. There’s something deeply satisfying about building a kingdom from a handful of coins and peasants. The same can be said for most real-time strategy games, but both micro and macro management are much more limited here. This means you have to be confident in your decisions in spending gold, expanding, in unit distribution, and expansion, as you’ll come to realise that one seemingly minor expenditure can have not-so-minor long-term effects. Therein lies the challenge of discovering what you can do, in your limited sovereign power, to ensure the safety of your kingdom and its loyal subjects, as well as how to keep your income renewable.

If you lose your crown, it’s game over. “No crown, no king/queen.” Unlike with coins or gems, if your crown is picked up, you lose immediately; your archers don’t get the chance to stop the Greed from running away with your crown. However, all is not lost… just most. You respawn with almost all of your walls demolished and most of your subjects without any gear. This may already spell doom if you had no backup gold in storage, and you may be better off restarting from the beginning, especially if you got rid of your trader – yes, it really is a roguelike in spirit. If you do play on, fortunately your archers will still be in their towers, your farms still intact, and your center still in its upgraded state with whatever coins you left in storage. Ideally, you get a good early start that will make your recovery point, should the worst inevitably happen, prevent you from losing too much time rebuilding.

While I love a game where you have to learn from your mistakes and are constantly discovering new things, the lack of explanation in Kingdom Two Crowns all but mandates external assistance for those not already acclimated to the series. This is compensated for by the game’s pleasant atmosphere. It may not be for everyone, but if you’re thinking you might like it, you’re probably right, so long as you don’t mind the learning curve. Even with its slow pace, its charming presentation and looming challenge will pull you back for more.