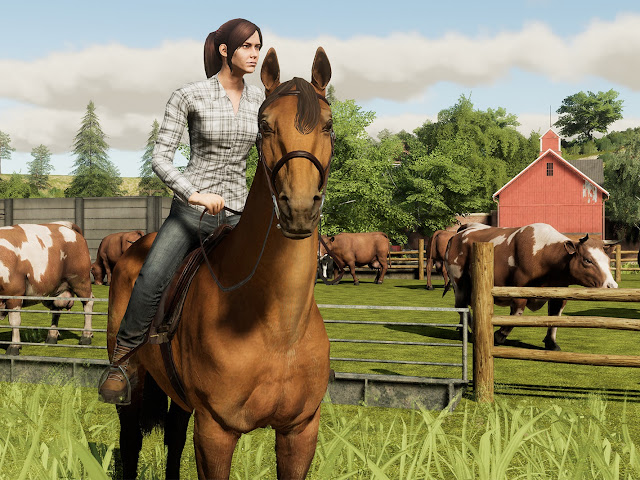 In Australia, climate change is hitting our farmers hard. Prolonged drought, ruined crops… it’s not a pleasant time to be a farmer across much of the country. That’s something that most of us don’t think about much. We live comfortably in cities where agriculture is almost an abstract idea and we rarely question how we end up with food on our plates. Which is why I’ve been an advocate for the Farming Simulator series for quite some time now. While they’re not based in Australia, this series does an incredible job of raising awareness for the lives of farmers, anywhere in the world.

I do question about whether the series needs to be an annualised thing, though. Farming Simulator 19 (which is set in America) plays much like Farming Simulator 18. There’s a different map to explore, but really that’s just moving around all the important places that you had to visit in the previous title. In other words, the shop’s at a different set of co-ordinates this time around, and you need to drive a little differently to get there, but you do once there is much the same thing as last time. The game box quotes “new vehicles, activities, crops, animals, tools, and ways to play – solo or with friends,” and technically all of that’s true, I guess, but the update feels much like what we expect from the most cynical annualised updates we see to sports games, to the point that I was able to jump into the new Farming Simulator and comfortably skip past the tutorials. But at least there are horses now!

One area where there’s been a lot of work done is to the visual engine. Farming Simulator 19 is a fairly “static” game, in that it’s open world but you can be driving through the heart of down and you’d be lucky if you see more than one other car and one pedestrian on the road (which you can’t drive over for kicks, or interact with in any way. Who knows, perhaps the village is dead because it is going through hard times like many real farming villages around the world and no one’s out shopping. Regardless of the reason, I’m sure the developers were going for “rural” in the design of the village and landscape in Farming Simulator 19, but it comes across as “depressed.” Furthermore, because crops grow slowly, there’s just not much motion in the world. But, while it might be a “static” game, it’s a visually impressive one, with meticulously designed farming vehicles and equipment, and there’s a real aesthetic appeal to looking out over field after field of carefully laid down crops. 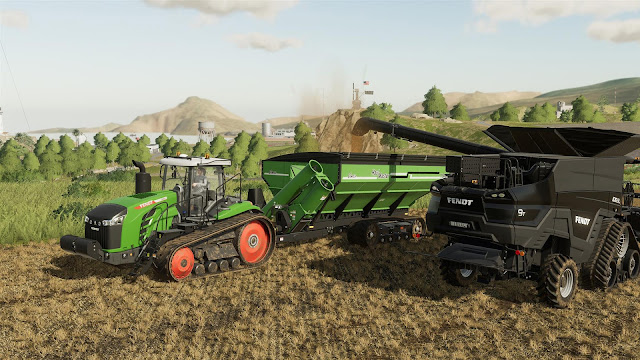 Farming Simulator is abstract in that you’re not going to need to sit there and wait for months for a harvest to grow. A couple of in-game days and you’re set to go to market. However, the game aims for genuine authenticity when it comes to the process of growing the crops. You’ll need to till the fields, sow seeds spray fertilizer, deal with weeds, and then harvest the final crop, all using fully licensed equipment from real-world manufacturers. If you choose to be a livestock farmer instead, the process is just as intricate. The equipment that you need to maintain your farm is expensive, too (in in-game currency), gently reminding players that farming is a more expensive business to manage than we’d generally be aware of. It’s fun watching various bits of machinery start to pile up around the place, though.

You can choose to manually manage every single lot of farmland that you’ve got, though that becomes unwieldy after a while. You can instead ask “helpers” to handle tasks while you focus on other things, though that naturally comes with a wage that you need to pay them. Having a profitable farm, regardless of how you do it, requires an unending commitment to “work” from you, and while all of this will come across as quite dry to a lot of people, in practice it’s no different to the process of watching cities grow in something like Cities Skylines, with its authentic modelling of the work of a city planner. In the end there’s something genuinely enjoyable about taking ownership of something and watching it grow, whether it’s an entire city, or just a farm, and Farming Simulator nails that.

Newcomers will be able to jump in and enjoy a very healthy balance sheet, and a farm with plenty of fields already “owned” and ready to farm. For more experienced players, it’s a good idea to play with limited resources from the outset and try to scratch out a living. Again, Farming Simulator 19 wants to be educational in tone. As dry as it can come across as a game, the developers clearly want players to walk away from their time with it with a better understanding of the trials and tribulations that real farmers go through. This is simulated through the challenges involved in maintaining a healthy margin for produce sold at times, rather than simulations of decades of drought and a hostile government that’s unwilling to supply sufficient support, but nonetheless does work in highlighting that a farmer’s life isn’t easy, nor straightforward. But, it does nonetheless drive home the idea that farmers aren’t exactly living in mansions. 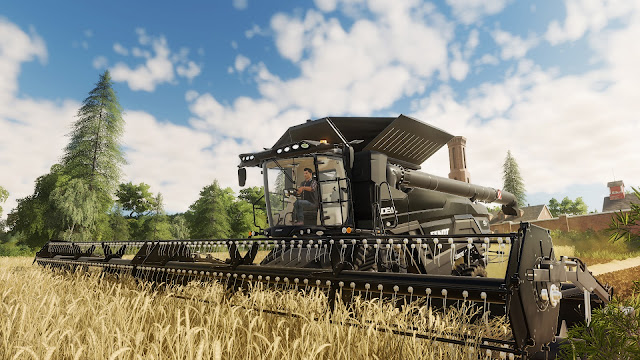 There are things I would like to see Farming Simulator adopt into the future. The impact of weather, seasons, and climate is a big one. Farmers live by the weather and are endlessly concerned about the movements of climate, and yet these things get lip service here. For a series that wants players to empathise and sympathise with the life of farmers, there should always been the spectre of a really bad storm or flood to wash away a season’s crop (and income) looming large.

A lot can be done to improve the economics models in the game too. Prices seem to fluctuate randomly and without warning, and while there’s a degree of unpredictability about market prices, there should be also some kind of information system – a news ticker or similar, to help players anticipate and work towards expected rises and falls in the market. Farming Simulator gets the mechanics of the farming itself down right, but the lack of attention to detail outside of those activities is beginning to become frustrating, especially given that the developer insists on this being an annual franchise, while failing to demonstrate the kinds of step forwards that people are right to expect from one title to its “sequel.”

Yet there’s a reason that I keep playing Farming Simulator, year after year. “Esoteric” is probably the best way to describe the appeal of this series, and it can feel a little silly buying into a series with each passing year when it shows less improvement than your typical FIFA update, but there’s something compelling about building up a farming empire. If nothing else, the developers are doing genuinely good work in highlighting a job that we should all be much more aware of. We don’t survive without our farmers, after all.