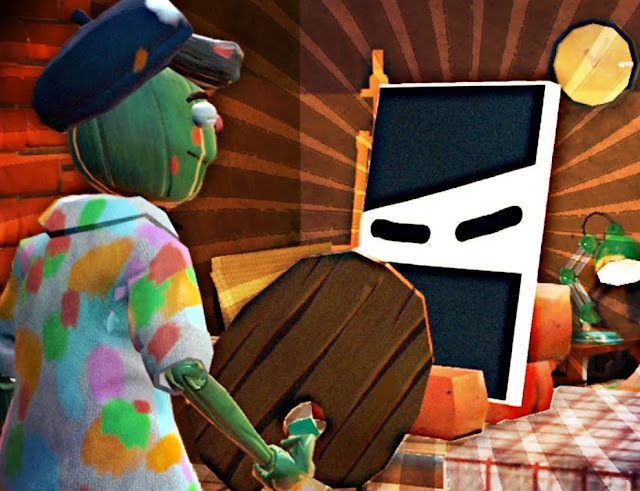 Review by Matt S.
The first time I put virtual paint to my virtual canvas, as I set out to make a career in the traditional arts, set against the backdrop of modern Paris, I drew the most juvenile thing I could imagine (i.e. a certain part of male anatomy). Then I called it “The Depth of Red Dead Redemption”.
It took me a long while to sell that painting. Apparently the people of Paris don’t appreciate the elegant minimalism of a black line sketch of male anatomy on canvas. I figured the title would be subversive enough to carry some commercial value, but, alas, it was not to be.
Passpartout is a rather delightful little game. Technically, it’s a simulator of sorts. You play an aspiring artist, whose one real goal is to make enough money so that they’re not starving on the streets. But where most simulators are a rather dry management experience, Passpartout is very hands-on; you’ve got to actually paint the works of art for your artist, too. 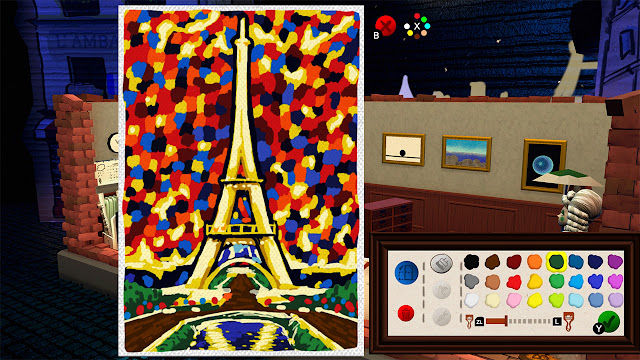 Don’t worry if you haven’t got much of a touch with art – because I sure as heck don’t. The game’s algorithms are designed to recognise the quality of your work to an extent (the better the art you make, the more money that you’ll make from it), but in practice it’s rather easy to ‘trick’. As long as you use a number of different colours and shapes, then one of the people that come to visit your little galleries will almost certainly purchase it. Take for example, a masterpiece I drew that looked like a Jackson Pollock piece, minus any sense of colour co-ordination, or the order and intelligence that always sits under a real Pollock’s ‘chaos.’ I called this piece “Donald Trump”, because the painting resembled something that a delinquent two-year old would produce, and it sold to some discerning customer immediately.
The game’s art tools are simple – really it’s a range of different colours and brush sizes, and that’s it – but it’s enough to reproduce some pretty complex works of art, if you’ve got the talent and patience to do so. I’m sure that for some a big part of the appeal of this game will be in re-producing a Dali, Matisse or Picasso and then seeing how much virtual cash they can make from it. However, as a rule the game really isn’t that concerned with the quality of what you produce, and that really helps boost the gentle ribbing of the very serious real-world art world that is the core of the Passpartout experience.
Like most good French humour from Jacques Tati to the entire world of mimes, Passpartout has a rather cynical, depressing undercurrent to it. Precisely because the game is so unconcerned with the quality of the art you produce, you’re actually going to be punished for taking the time to make something good. Each in-game week there are bills to pay, and that time continues to tick over while you paint. So, if you spend a couple of in-game weeks working on a (relatively speaking) masterpiece, you had better hope it sells for a bundle, because otherwise you’ve put yourself at a severe disadvantage. Especially when you can be comfortably covering the bills by producing nasty stuff quickly. 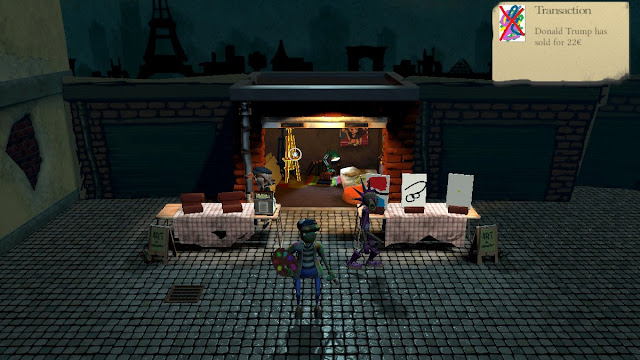 Of course, this is a tension that many artists struggle with over the years; the desire to develop their creativity and bring their ideas to fruition, set against the reality of bills, lifestyle costs, and the need to give the consumers what they want. The fact that you can make a better career by producing inferior works is a scathing indictment on the impact that capitalist systems have on the artistic process, and so, under its silly humour and outright encouragement to draw lewd anatomy, Passpartout certainly has one or two rather sharp things to say.
The game’s cynicism runs through to criticise the consumers of art too. You’ll have all kinds of art fans visit your galleries – from punk-haired youth to stately elderly figures, and each of them have certain tastes that you can indulge with your work. There’s a general rule that they don’t like minimalism (black lines are boring, lots of colour is good), but otherwise these “customers” will constantly sprout pretentious nonsense about your art talents (or lack thereof), before buying one of your works for an arbitrary amount. Of course, consumption in the art world works differently to most other consumer goods, because people are buying unique pieces, but there’s surely a theme bubbling along under the surface in Passpartout to suggest that, broken right down, the quality of art produced isn’t of particular importance to the people buying the art. Instead, what’s important is how smart they feel for buying it.
I would never presume to understand the mind of Banksy, but I get the sense that his recent stunt where he had a frame destroy one of his works after it sold for an obscene amount of money was his own way of dealing with the kind of consumer of art. It’s clear that whoever was behind Passportout has an intimate understanding of these kinds of circles, because for all the colourful humour of the game, it’s hard to escape a note of frustration in the kind of lifestyle that the art world delivers to artists. 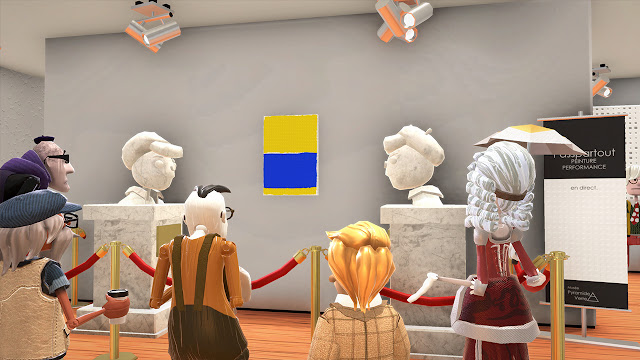 Mechanically, this game is incredibly simple. After completing a painting, you put it out on display, and if a visitor to your gallery likes it, they’ll offer to buy it. You’ve got a limited capacity to haggle to try and squeeze a bit more cash out of them, but otherwise, the game’s all about producing more art, and then selling it off to clear room for more art.
You’ll start out living in a dingy garage and selling art on the streets, but if a critic happens by, and happens to like your work, you’ll have the opportunity to move into a studio, and start to make your way up through the Parisian art world. Unlike other casual simulators, such as Game Dev Story, it’s possible to fail at Passpartout (though if you “sell out” it’s quite hard to do that), but again, the focus is really on the creation of art, and the simulation side of things are very light on.
In the end, I found it difficult to keep coming up with new ideas for art works – and perhaps that’s another piece of commentary to take from the game; when artists are forced into endless creation loops by the necessities of commercial demand, it tends to be difficult keeping the creative drive high. Despite that, I never stopped finding Passpartout enjoyable, thanks to its lighthearted presentation and biting, and yet amusing, sense of humour.

Dark Souls on Nintendo Switch is Dark Souls yet again