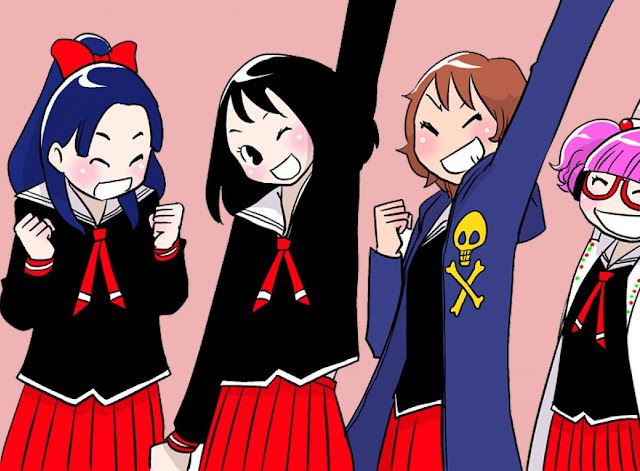 Who would have thought that combining an all-girl metal band, aliens and a story arc that involves gender swapping (very much reminiscent of the acclaimed Japanese movie Your Name) would work as well as it does as a complete package? You can definitely call it wacky and out there, and it’s a game that doesn’t take itself seriously, but it’s for these reasons that DMM Games’ Gal Metal is such an interesting and gratifying experience on the Nintendo Switch.

The story begins when a schoolboy finds himself walking home from school late one evening. He is suddenly attacked by an alien race with a vendetta against humans, known as the Octoids, and to make matters even worse (and for reasons known only to themselves most likely) the aliens somehow transplant his soul into a high school girl’s body! After the initial horror, he finds himself in control of her body and is able to hear her thoughts and converse with her. It turns out that the girls body that he has inhabited is the main character Rinko who is the president of Kichijoji Metal Girls (K.M.G. for short) an all-girls metal band.

Including Rinko, there are five high school girls in K.M.G, who all have their own unique personalities. Rinko, being the club president, is the one that the band looks towards regarding any course of action that needs to be planned. She’s a proficient drummer and teacher as she finds herself thrown into that role, as she encourages the male protagonist during numerous practice sessions. The lead guitarist, Shiimi, is your typical anime-type delinquent. She may look tough on the outside, but inside lies a kind-hearted girl whose music is an outlet for her home life. Erii, the rhythm guitarist, is the glasses wearing shy girl in the band, trying to draw as little attention to herself as possible. Mani, the bassist, is incredibly obsessed with horror and is often found at the cinema. Lastly, Kia, is the self-proclaimed otaku of the group. She dons a laboratory coat and is at the forefront at formulating plans to defeat the evil Octoids. 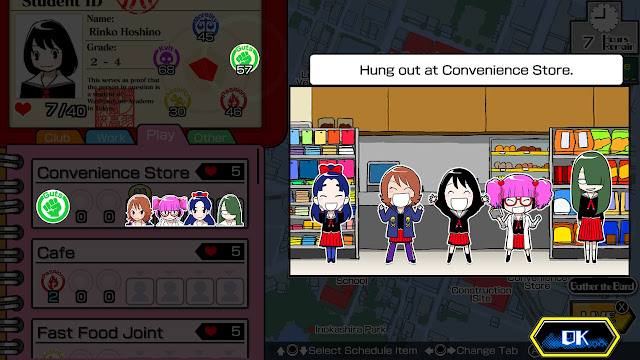 The gameplay is separated into two distinct sections. The first is the bands’ practices and concerts that you partake in. The game defaults to motion controls, but you are free to swap to button input or touch controls from the options menu. As someone who generally prefers traditional controls to motion controls, I dabbled in all of them. I found that the motion controls provided the most authentic experience, and during my time with the game I never encountered any delayed response to my motions. At the beginning, the game provides you simple rhythms to learn and as you discover more they become quite complex. When performing there is a bar above the band that divides the song into segments. For high scores it’s absolutely crucial that this is taken into consideration when performing as meeting certain requirements in the timeframe allows for section, combo and secret bonuses.

The second section involves navigating Rinko’s after school activities. Rinko has forty stamina points in which to balance a range of activities. Practicing is important so that future concerts are successful, but then again so is visiting the other locations. Each location is allocated specific stat points that are rewarded upon visiting. These are – morality, guts, passion, activity and kvlt which provide different perks such as helping with alien attacks. Options are listed under the categories – club, work, play and other. Club activities include practicing drums solo or with the band: the former giving you the option to practice a specific rhythm and successfully perform it five times during the song and the latter allowing you to practice a variety of rhythms if you wish to. Work and play both list locations where you can work or visit, such as working at a café or visiting the movie theatre. Other provides you will the opportunity to simply pass the time. Another benefit of these activities is that it increases Rinko’s friendship with her band members. Every time that Rinko goes to a place that one of her band members are it increases their friendship which then allows the viewing of additional scenes that teach the player more about the band member in question.

There are collectibles in Gal Metal in the form of badges. There are 447 badges to collect which are obtained from playing new rhythms, playing them a specified amount, completing concerts, meeting up with band mates and developing their relationship. These badges add to the replayability as they are achievements to strive for. 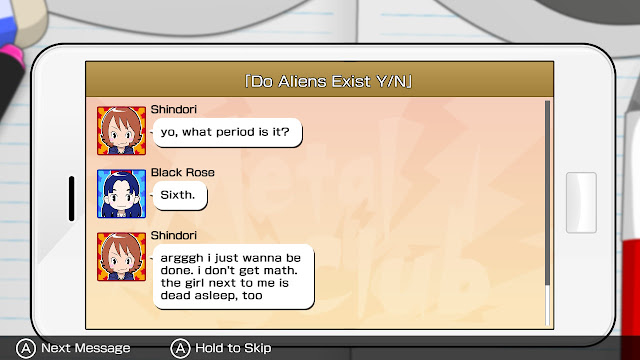 Gal Metal eases you in with the difficulty. The metal score that you need to achieve to beat the evil aliens starts low and slowly increases each time. A solid grasp of only a few rhythms would be enough to get you through to the credits. The real difficulty is choosing to go through the game again with the inflated score requirements which require more difficult rhythms requiring fast and precise drumming.

The art style makes Gal Metal appear to be taken directly from a slice-of-life manga volume. The story is told across colourful, animated manga panels. The scenarios that play out when you meet your band members at certain locations have the character appear as if they are a cut out held up by a stick which is incredibly cute. The style really works to illustrate that the game is all about fun and doesn’t take itself seriously.

Gal Metal is a unique experience that combines cute high school girls, galactic adventures, evil aliens and metal music together in one unmissable experience. The characters all stand alone in their own right and the story line is engaging with a few plot twists mixed in which has you wondering as to what will happen next. The game took about five hours to complete however mastering the rhythms and besting those difficult scores aided in my eagerness to replay levels factor and kept me coming back for more.

The first proper Nintendo Switch BlazBlue has a release date