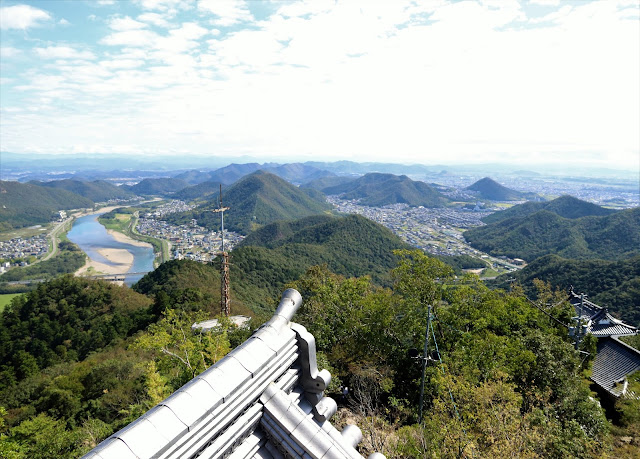 I’m back in Australia now, so writing this piece on Japan is my way of dealing with the post-travel blues. That being said, I wanted to write about Gifu city anyway, because I visited it for the first time this year, and it made a powerful impression on me, especially given that I’m a fan of Japanese history.

Gifu, the city, is the capital of Gifu prefecture (funny, that), and is located smack bang in the middle of Japan’s main island, Honshu. In terms of the major tourist destinations that it’s close to, it’s located quite close to Kyoto and Nagoya, but if you’re travelling from the major two cities – Tokyo or Osaka – you’re in for quite a hike.

Really, the city’s biggest problem is that it’s not actually connected to the Shinkansen, so to get there by rail, you’re actually looking at a fairly lengthy period of time on the local lines. That being said, the trip itself is a delight. Travelling from Tokyo, I started early one morning (as in, 5am early), and exclusively used local trains. I spent a few hours in the middle of the day at Hamamatsu city for lunch and to visit the local castle there, before travelling on, and I was at Gifu in the evening. The whole trip was comfortable, like Japanese trains always are, and I got a lot of reading done.

Once at Gifu, there’s a real wealth of things to do if you’re a fan of Japanese history. The top destination within the city itself is Gifu castle, which was at one point the seat of power of Japan’s Napoleon – Nobunaga Oda – himself. This castle is in the most incredible location – perched high up a mountain (so high you need to get a cable car to reach it), and it’s genuinely incredible to think that any warlord was ever able to march an army up there and actually capture it. It happened, to be sure, but as far as intimidating castles go, this one would have to have been right up there. Today, the views are absolutely spectacular, and really show off the city beautifully… and it really is a beautiful little city. With a population of only around 400,000 or so, it’s nestled in a ring of quite high mountains, and strikes that perfect balance of bustling energy and calm that is a hallmark of the better regional cities in Japan.

Gifu castle is a reconstruction (the original was razed) which today holds a quality museum in it, filled with information on the various warlords that held it, and the weapons and armour they used. While you’re up there – and to make the most of the relatively expensive cable car ride – there’s also a tea house which serves up some more incredible views to go with the tea, and a gorgeous little squirrel park which is as much fun for adults as it is kids. Who doesn’t like feeding a squirrel a peanut? At the base of the mountain there’s an expansive park and another museum, which is this time focused on the general history of Gifu. It’s essential, too, and will take you a couple of hours to wander through.

Within a short walking distance of all that history is another bit of Gifu historical tradition that continues to this day; cormorant fishing. It’s just as the name suggests; Gifu fishermen take their boats out on the massive river that cuts through Gifu and, via a special harness, get their flock of  cormorant birds to pull fish out of the water and drop them in the boat before the bird can swallow it. It’s a fascinating spectacle to witness, and it’s possible to jump on special tour boats that get you really close to the action.

After all that activity, the shopping street that extends off Gifu’s major train stations is the perfect place to find a good meal. Gifu (prefecture) is one of Kobe’s principle rivals for wagyu beef, and so I highly recommend finding a place that serves up that beef. The best of it all comes from an area called Hida, so while in Gifu (city), go on the hunt for a restaurant serving up Hida beef. It can be expensive, because it’s very high-grade wagyu, but then I found a place that served up a banquet with five different cuts of the beef, and a great bottle of wine, for two, for around $200 – which is not bad for a gourmet meal at all. You can find places that serve up cheaper plates of Hida beef for $30 or so, but if you’re going to treat yourself, do it with Hida beef. “Melt in the mouth” doesn’t begin to describe how good this marbling is.

My most amusing discovery in Gifu city, however, has got to be the Australian bar that I found (Marquee Australian Bar), right in the heart of town. When I first passed it I had to do a double-take, because the last thing you expect to find in Tokyo, let alone regional Japan, is businesses set up explicitly as Australian businesses, but yes, it really did have Australian flags hanging outside. I just had to go in and see what it was about.

The owner of the Australian bar really is Australian. He’s from Melbourne, but has been living in Gifu for over a decade, and he’s a real credit to the community. He hosts “English speaking nights” where he encourages Japanese people and expats to come together and talk in English (one suspects because he’s much more comfortable talking in English himself), while enjoying the cozy atmosphere, and a range of Australian beers, from the iconic foul & feral stuff (Fosters, VB), through to some more niche labels that I just wouldn’t expect to find anywhere in Japan. As much as I love Japan and rather wish I never had to leave, it’s always nice to find a piece of home abroad, and based on my chat with the owner, he was happy to see me too – there aren’t exactly many expats hanging around cities like Gifu.

Best of all, on the TV he had the AFL playing. Australia’s beloved AFL. I tell you what, explaining that sport to Japanese people is a challenge. Watching a game, chatting about home, and getting stories from local Gifu residents was all a truly great way to spend an evening however, and I genuinely hope that the Marquee Australian Bar is still there the next time I find myself in the city.

After the first day in Gifu itself, the next couple of days were spend heading to places nearby for yet mre history tourism. The next city over, Ogaki, is one of the least pleasant places I’ve been to in Japan, resembling nothing if like a truly run down city that the local youth can’t get out of quickly enough, but it does have a charming little castle that’s worth hurrying through town to get to, and it’s only a 30 minute train ride away. It’s also on the way to Sekigahara, which I’ve covered in a previous article, is also a short distance away by train, so stopping off to check out one of the important castles in the leadup to that historical battle is an appropriate and necessary thing to do.

I doubt that Gifu is high on the priority list for anyone visiting Japan for a first, second, or even third time. It’s very much a typical regional city in that regard. But with the most spectacular castle views in all of Japan, as well as its central location to other major points of historical interest, it’s also something of a hidden gem to people that count Japanese history as one of the things they love about the country. For my part, I have absolutely every intention to head over there again, because there wasn’t a second about my trip there (other than the walk through Ogaki to get to the castle) that I didn’t find absolutely fascinating.