There’s been such a resurgence of digital pinball in recent years. A good bulk of real pinball tables that exist in the real world have been digitised, and there have been so many original digital creations that have really pushed boundaries.

It’s not hard to understand why pinball is so popular. It’s as simple as skill tests get, and yet the abstract designs of the tables encourage the imagination, and the limit to how many balls you get per attempt makes chasing high scores an exciting, effectively endless pursuit. No matter how good you get at pinball, there is always a new target and goal to aim for.

Of all the recent digital pinball efforts, my favourite has consistently been Zen Studios with its Zen Pinball and Pinball FX franchises. Zen Studios balances out realistic pinball table designs with animations and visual features that would only be possible in the video game form. And while I love the way this has allowed Zen Studios to create Star Wars, Aliens, Marvel and other licensed tables that do as much justice to the properties as the films themselves, there have been times that I’ve wished that Zen could take its brilliant physics engine, and eye for detail, and apply it to the proper tables I love flicking a ball around whenever I find one in the rare arcade or occasional shopping mall.

— High priest of the Church of Hatsune Miku (@DigitallyDownld) October 9, 2018

Zen Studios has done just that with its Williams Pinball: Volume 1 pack; four tables from yesteryear from manufacturer, Williams. None of these are even close to my favourite pinball tables, but they’re a good sign for what is to come down the track.

None of the tables are bad, either, it must be said. Fish Tales turns the pinball table into a fishing lake, while Getaway seeks to recreate the high-speed hijinks of a police chase. Junk yard sets you the task of exploring all corners of the table for trash/loot, while Medieval Madness, the pick of the bunch, transports you to a fantasy days of yore, where you need to smash down castles and do battle with trolls.

As with all Zen Studios titles, the physics are spot-on. I love the way Zen gets the ball to roll around, and I find it strikes just the right balance between speed, weight, and freedom. Interestingly, while the tables are all lovingly recreated, with the ramps and bumpers all in the right spots, Zen Studios couldn’t help but add some light “Zen” elements to each, with fully animated characters adding a bit of life to real-world pinball. Real purists will probably not like that touch; they want the static plastic pieces and environments, but to me this is a good compromise between classic pinball and the digital touch. 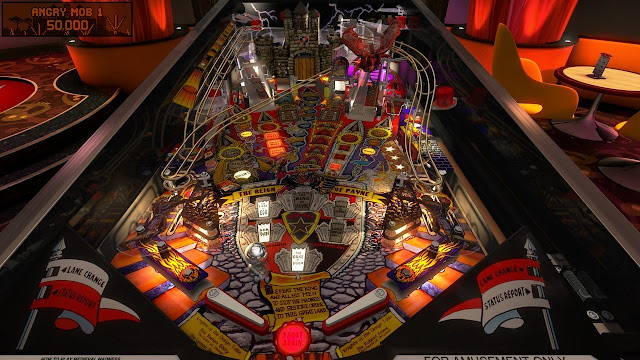 One thing that I do think is disappointing will sound petty, but as a fan of pinball, it’s something other developers have done, and should have been easy for Zen to follow suit; there’s barely any history of the tables provided. You get a brief pop up at the start of a game telling you the year that the table was produced, and the number of units made, but I’m used to having a couple of paragraphs to read explaining the history of the table, some of its key features, and why it’s a historically interesting table worth looking at again today. It’s one thing to simply recreate the table, it’s something else – and something valuable, to give fans of the form that bit of information and context that helps them to appreciate what they’re playing that little more.

Otherwise, everything you expect from Zen Studios is applied to the Williams tables; robust and comprehensive online leaderboards, plenty of alternative ways to play, and optional powerups to unlock and upgrade that both help to get you better scores, and mark out the progress that you’re making.

Best of all, while none of these four tables are my favourites from Williams, the subtitle of the DLC is “Volume 1.” There’s clearly more to come. And, I mean, Williams is the manufacturer behind Tales of the Arabian Nights. The greatest pinball table ever made. Bring Volume 2 on!

Review: The World Ends With You: Final Remix (Nintendo Switch)