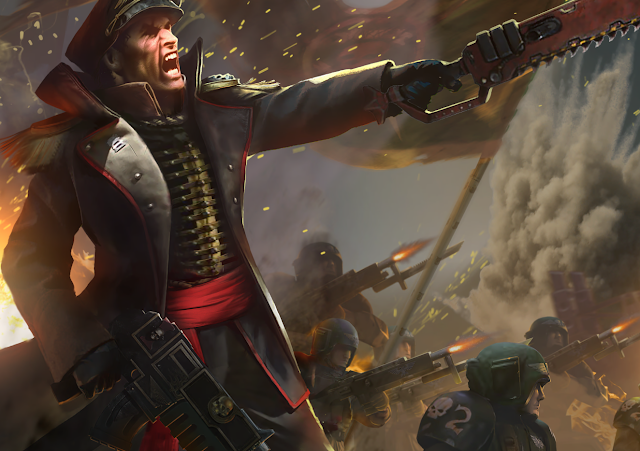 The Warhammer formula is named the way that it is for a reason. It’s at its strongest when exploring how war is the endless meat grinder that spans dimensions and factions, whether that’s in the ridiculously intricate lore that has developed around the franchise for years, or in relishing the roiling, bloody beast that games like Warhammer 40,000: Inquisitor – Martyr have become. It’s a visceral experience when you’re up to your waist in the guts of your enemies. It’s most enchanting when you’re given reason to pour over the details of the cults of Commorragh and the Eldar blight against space and time. For what it’s worth, Warhammer 40,000: Gladius does admirably for a title that doesn’t have a laser focus on extravagant combat or a strong narrative.

It’s important to note that Warhammer 40,000: Gladius – Relics of War is, in theory, a 4X game, and perhaps is too much of a stickler to that moniker by giving players the choice of only four factions out of the expansive Warhammer universe. You can play as either the Space Marines (the obligatory tutorial faction), the Necrons, the Orks, or the Imperial Guard. Your mission, should you choose to accept it, is to regain a foothold on the unforgiving world of Warhammer 40,000: Gladius – Relics of War and to deal with any faction that opposes you. However, that’s not to say that faction politics are the only dangerous thing that you have to deal with. All manner of dark beasts and environmental hazards wait in the wings to kick you when you’re down, and you’ll spend a surprising amount of time preoccupied with those instead of your galactic foes.

That’s not necessarily a bad thing, though. The game really only has one true win condition, which means that having more compelling enemies beyond the obvious is a given. Unlike other 4X games, there’s an immediately noticeable lack of methods by which your faction can claw its way to the top. If you’re someone used to lording piles of money over your foes and conquering a land through economic dominance, then you can forget about doing that in Warhammer 40,000: Gladius – Relics of War. The same goes for if you’re usually a sucker for political grandstanding ensuring a victory. The only way you can truly win in this game is by taking a martial victory by force. For those who play 4X games to simulate the feeling of ruling over a fully-functioning empire, this is going to feel a little bare bones. Yes, we all know that the odds of getting the game’s factions together at the dinner table for Christmas are unrealistic. However, eschewing the ability to negotiate completely seems like such a glaring omission from the genre standard that it’s almost inevitable that the flow of the game takes a hit. Everything else about Warhammer 40,000: Gladius – Relics of War is otherwise pretty standard fare, but the absence of diplomacy options feels more pronounced because of the pared back approach that the game takes to another key element of 4X titles: city management.

If you’re playing as the Space Marines, you set up what’s essentially one main base, and use accoutrements to spread further out in across the land to gather resources. Building a sprawling megapolis is something that can be done, but you’re not necessarily incentivised to do it. The management of your city-state isn’t as complicated as you may be used to in more recent titles like Endless Legend; take a turn to pick a patch of grass to build on, take a few turns to research a resource generating building, take a few turns to build it on that grass. Rinse and repeat.

Everything seems to take an inordinate amount of setup considering the relative simplicity of the innate management system – no need to barter, negotiate, or think too hard about what type of resource-generating hut you’ll squat in next. Everything is unlockable through research, and each hut is just a different-flavoured version of the next one. Buildings don’t require any guesswork, and they shouldn’t, but it’d be nice if it actually felt necessary to invest time into buffing up your city. Military might clearly is the name of the game in Warhammer 40,000: Gladius – Relics of War, so theoretically you’ll be fine with a handful of resource generators and the buildings that allow you to build powerful Hero troops. Yes, that’s all very well and good, but streamlining empire-building considerations down to “this gives me more soldiers” isn’t a move that’s particularly good at holding one’s focus for a long period of time. 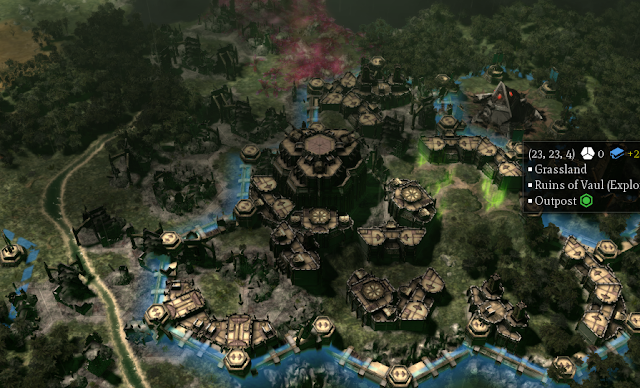 That being said, this game does a pretty decent job at showing you the ropes in terms of military might very early on. Even if you don’t crack into the tutorial – which really is only balanced for total newbies to the genre – you’ll encounter some resilient foes very early on. That’s not to say that you should be expecting to be kicked to the curb on turn ten by some oversized plague animals, but the AI did a great job overall of building a creeping sense of dread by just always hanging around the place. I spent a good few hours haunted by roving bands of wildlife that loved to pick at my troops before racing off into the distance, returning now and again almost as if they were goading me into a trap.

However, when I gave chase and got tired of being on the defensive, I ran into a suitably horrifying scenario with a brain-controlling monster that I was grossly underprepared for. The fire of my Marines’ weapons rang shrilly in my headphones; they sounded like toy bullets and may as well have been for all the damage they did to the many-tentacled enemy. Time seemed to slow as I honed in on the amorphous blob that turned my own men against me in some sick display of mind-control. My troops were too weak, and I was sent limping for the hills to rest and recoup. Every once in a while I’d see the flash of a creature appear out of the fog of war on the borders of my city before disappearing. It was chilling, and probably the most effective way that Warhammer 40,000: Gladius – Relics of War builds tension.

Atmospherically, it’s in those moments that Warhammer 40,000: Gladius – Relics of War shines the brightest. When you’re forced to flee a territory because of an enemy infestation, or when you’re hunting down a weakened foe only to find that you’ve been led right into an ambush. These surprises shake up the relative monotony of the base-building that’s available to you, and does so in rather spectacular ways. Overall, the simplicity for the title isn’t for everyone, and it appears that you really only have to gun for one of the 4Xs that define the genre: exterminate. That being said, each faction will have a straightforward series of objectives that drives you across the wasteland of the planet in search of more things to destroy and to conquer. The less time you need to spend babysitting your city’s development, the more time you can spend engaged in alien tactical combat with an increasingly tough array of enemies. Warhammer 40,000: Gladius – Relics of War may not play like other 4X games that you’re used to, but it treads a perfectly acceptable path of its own that fills the stomach, albeit not quite to satisfaction.