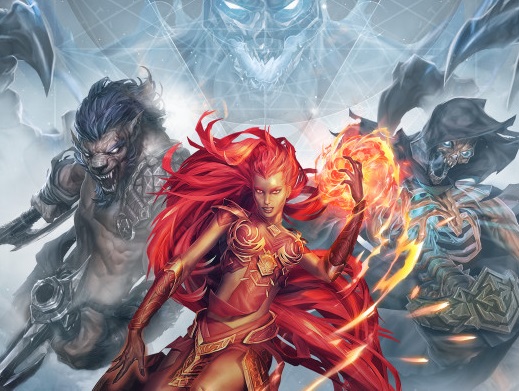 Just the other day in a review of Victor Vran’s recent Nintendo Switch release, I mentioned that it’s hard for a “Diablo clone” to step out of the shadows of Diablo. The game named the genre for a reason. Even the better efforts tend to stick very closely to the path paved by the granddaddy. But Shadows: Awakening… well if it isn’t just a little bit different! What a delight that has been!

Shadows: Awakening comes to us from Kalypso, a publisher that has built a business model out of taking existing, popular ideas, and doing something genuinely interesting with them, without offending the quality that made the original so well regarded. Tropico is Sim City plus a different tone of humour. Dungeons is Dungeon Keeper but modern, since EA has given up on all its Bullfrog properties. Shadows: Awakening is Diablo for people that like messing around with multiple different characters at once.

The core mechanic is the ability to switch between a number of characters at once. To start with, you’ll have two: a “living” human hero, and a demon. What’s fascinating about this is that the two heroes inhabit different realms; the human fights against spiders and monsters and things in the “real world”, while the demon kills ghosts and other demons in a shadow world. Both characters can also find different kinds of secrets in their respective realms; the human fellow can open chests. The demon can find heal points in dungeons. On top of that, the game features environmental puzzles that often require you to switch between the two characters. Come to a dead end off a steep cliff? Switch to the demon form and a ghostly bridge might materialise. 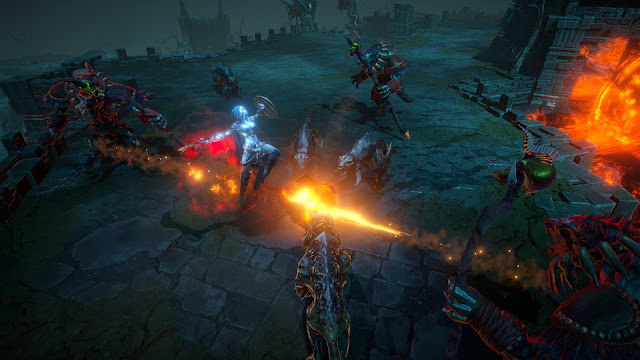 As the adventure wears on you’ll acquire even more heroes, each with their own combat skills, and can be swapped between on the fly. You’ll need to take full advantage of that system, too, because unlike in many “Diablo clones”, your characters in Shadows can’t absorb a lot of damage, and combat can be difficult because characters can die quite easily. But it’s also an enjoyable combat system, and there’s a fun rhythm between flicking through characters and tossing out a few abilities before cycling through to the next one, to given the previous hero a chance to rest.

Shadows: Awakening also has an intriguing and exotic setting. The very first location is inspired an 1001 Arabian Nights-style medieval city, and not enough developers tackle that kind of setting. It sets the tone nicely for what is to come after that, with an eclectic mix of locations, characters, and places to explore. There’s also plenty of lore to read through by finding manuscripts and spending the time talking to each of the other characters in the world too. It slows the pace of Shadows right down – this is a genre that’s usually keen to push you into your next dungeon and stream of loot – but it never slows down so far that you’ll start to think you’re playing a Baldur’s Gate-like either. I found it to be the perfect blend; I never got so stuck in working through sub-quest after sub-quest that I lost track of the main narrative, but I was also given an incentive to explore and pay attention.

Thanks to the ability to switch between characters to solve light puzzles, dungeon design in Shadows: Awakening is really quite memorable. Again, it slows down the overall pace of the action to be constantly switching between “worlds” so as to not miss anything, but the layouts are impressive, have enjoyable traps, and the combat, when it comes, feels all the more impactful because adventure isn’t a sequence of one swarm after another. 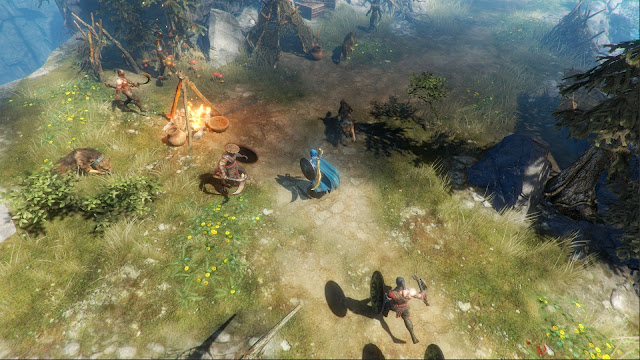 I will say though that for a game that wants you to spend as much time reading as it does, Shadows could have done with a bit of interface fine tuning for the console release. Developers (and publishers) have an unprecedented ability to develop a game for PC, but easily port it to console. That doesn’t mean they should be lazy about it, though. When people play console games, they’re sitting much further away from the screen, and an interface that uses the same text size and font that works on PC might not work at all on console. It’s sometimes hard to read long blocks of text in Shadows: Awakening, and while this game is certainly not the only one guilty of that, I found it much more frustrating here because I was invested in the world.

Further to that, technical issues wear a bit thin on the patience. Bugs are easy enough to forgive and assume that they’ll be patched out, but did the inventory management system need to be so cumbersome? I don’t think I ever become comfortable with the way I needed to keep cycling through characters and then checking every piece of wearable equipment for adequate matches. As a “Diablo clone”, Shadows gives players a lot of loot, but that inventory system really worked hard to ruin the experience.

Still, the developer deserves props for doing something genuinely interesting in a staid genre. Shadows: Awakening is familiar enough, but it has some enjoyably unique mechanics that help to elevate it, and a world to explore that’s genuinely captivating. It would be great to see the developer get a chance to do more with this franchise.