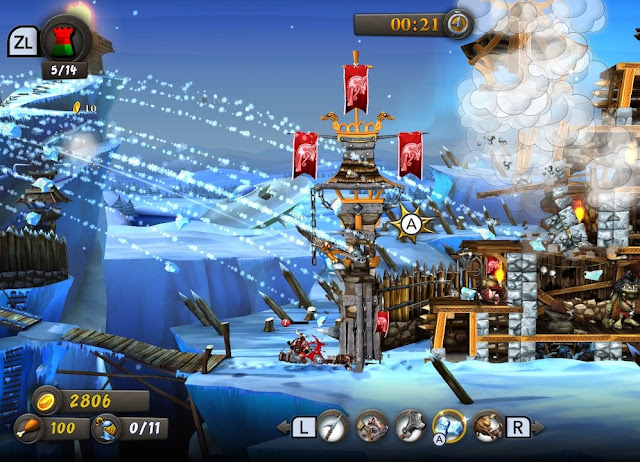 CastleStorm must have a reputation by now as Zen Studios’ “other” game – the Zen Pinball series had cemented the Hungarian development studio as the reigning champion of digital pinball, so much so that the company’s bite-sized RTS often falls by the wayside. While Zen Pinball is renowned for its simplicity and accessibility however, CastleStorm is decidedly less elegantly designed. It’s a 2D RTS which copiously borrows ideas from a number of other games, and while it’s ultimately very functional, the disparate mechanics tend to clash with each other and impede on delivering a proper strategic experience.

Related reading: CastleStorm is also in VR! Here’s our review

CastleStorm can best be described as a mix between structure-destruction games like Angry Birds and side-scrolling RTS games like Swords and Soldiers, with a few extra elements mixed in. The ultimate goal in a competitive match is to destroy your opponent’s castle. You have a variety of manually aimed projectile weapons such as ballista shots, bombs and rocks, AI controlled units that walk along the bottom of the screen and attack for you, and an assortment of magic spells with their own individual cooldowns that can turn the tide of battle. If things get dicey, you can also summon a hero unit and transform the game into a beat ’em up for 30 seconds – letting you cut through the enemy lines to give your team an advantage.

Each individual component of the game’s strategic package is crafted well – ballista shots are precise and feel satisfying, whereas bombs and rocks unleash some cathartic mass damage on the enemy castle. Summoned units are unobtrusive, if a little forgettable, but they’re also a perfectly valid way to take the lead in a competitive match. The unit types are varied and having good army composition leads to a palpable difference in-game. Controlling the hero unit does feel a little off, but this is more to do with the attacks and animations rather than anything else. The graphics are colourful and cartoonish, and are overall quite pleasant – and there’s some good visual humour in the designs of each of the castle rooms. 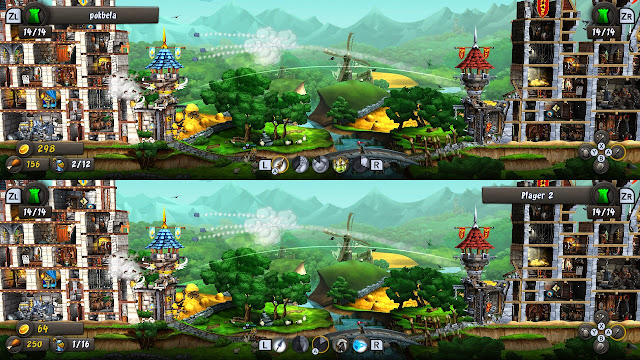 The problem starts to arise when considering the game’s pillars of interaction as a cohesive whole. Ballista shots reward careful aim, which is already finicky with the Switch’s joystick, and it rewards players who are consistently able to get even more finicky headshots. This is complicated by summoned units and friendly fire – as many attack with melee swings, killing your own units by accident is a real concern. Summoned units are created with a resource called food, which is only used for summon units – special ballista shots and magic spells operate on their own individual cooldowns. The gameplay quickly devolves into a memory game. You’ll need to remember to fire a bomb every 25 seconds, use your hero summon every 60 seconds, and keep making units once you’ve earned a bit of food. Because the systems don’t positively interact with each other, the full gameplay experience can start to feel tedious.

This concern seems to be addressed in the single player campaign, which throws constantly varying level goals to ensure players are never doing the same thing for more than five minutes at a time. In one level you’ll be in an arena and forced only to use your hero character, and in another your troops will be on strike and you’ll be forced to rely on your ballista. The single player campaign is controlled by a very gradual upgrade system, where you can buy a gentle improvement for any projectile, unit or spell between each level. You’ll naturally pick out your favourites but the campaign will use this to bottleneck you: I preferred upgrading projectiles for example, and so I had to go back and grind to succeed in a level which was all about getting summoned units to retrieve goodies from the enemy castle.

It’s perhaps a double-edged sword at best, but CastleStorm’s campaign is remarkably lengthy. If you played one or two missions a day on your commute to work, the campaign would take you months. In this light, it’s clear why each level gives and takes away mechanics: with nine summoned units, nine projectile types and nine spells to use, the game needs some way to keep feeling fresh and unique. Each level can give you up to five stars earned based on your ballista accuracy, whether you completed an optional condition and whether you finished in normal or hard mode. This game just has so much for players to do. 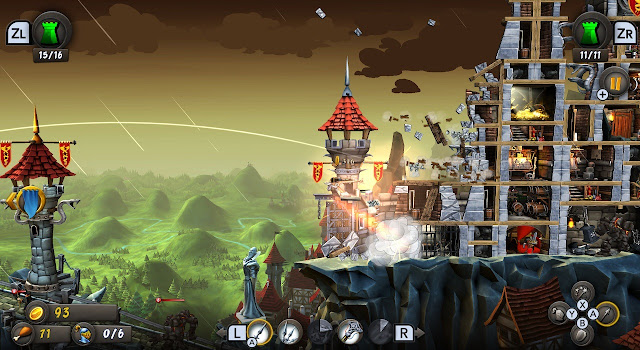 The campaign tells a story about four factions and a quest to save the world. The writers seem to be most interested in irreverent, sarcastic humour over anything else, but oftentimes this misses the mark. For a game as mechanically focused as this, cutscenes between each level seem near antithetical to the approach – and it’s grating when they are filled with low humour and deconstructions of generic fantasy tropes. Sir Gareth might be arrogant and near sociopathic in his cutscenes, but in gameplay he’s no different from any of the other hero characters, and so there’s no consistent personality for him to embody outside of a few one-liners between skirmishes. The same can be said for the overall story: it’s so concerned with justifying all the outlandish campaign scenarios that it can’t sell a serious moment.

Multiplayer is fairly entertaining if you can find some like minded friends willing to learn the mechanics with you. I did admire how the developers managed to fit the game’s complex control scheme into a single sideways joy-con: camera control is a strictly tilt affair, but you can recentre at any time by clicking the joystick and it’s actually very comfortable. The more difficult thing is convincing a friend to play with you, since matches are overlong and are prone to stalemating. Victories in multiplayer don’t feel decisive or impactful; they feel more like rewards to whoever can withstand attrition for the longest, and whoever can keep remembering to use their cooldowns as soon as they are ready.

If you’re looking for a hidden RTS gem on the Switch, CastleStorm is unfortunately not going to change much for you. It’s a perfectly serviceable game with a lengthy campaign and plenty of customisation, but it lacks defining mechanics that inspire or excite players. It’s as if the game’s ultimate goal is not to enthral you, but instead just keep you not-bored for as long as possible; and while it’s largely successful in that mission, I couldn’t help but shake the feeling that I’d rather be playing something else.