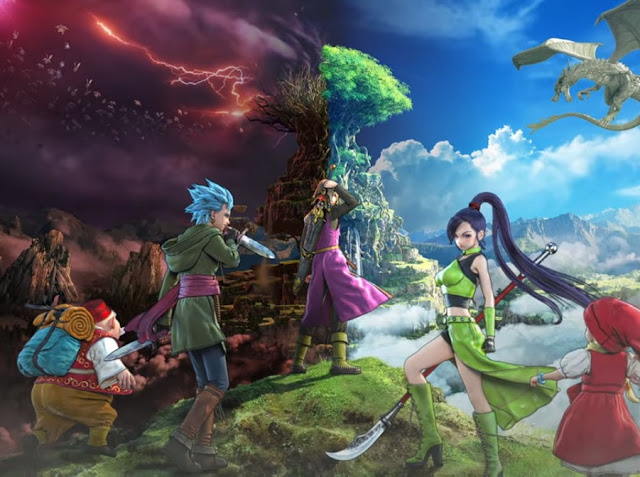 Dragon Quest XI is what many Final Fantasy fans wished that the numbered Final Fantasies would be. Not that the Final Fantasy XIII trilogy and XV, representing the last decade or so of single player Final Fantasy, were in any way bad. It’s just that they also didn’t do much to capture the essence, structure, and design of the beloved franchise that was established before them. Dragon Quest XI, by contrast, could effortlessly be turned into a SNES entry into the series simply by pixelating everything and then flattening it all down to two dimensions. It is, by far, the most traditional JRPG on the PlayStation 4, and it didn’t need to be any more than that to be a true delight.

Related reading: My review of Dragon Quest VIII, the closest to XI in structure. It’s available on the 3DS

In fact, there’s something so mesmerising to seeing those epic expanses of land and gorgeous monster designs realised in 3D and HD. With every Dragon Quest that has come before players have needed to stretch their imaginations to an extent to rebuild what they saw on the screens in front of them. Take, for example, the ridiculously cute (and iconic) slimes, with their blobby smoothness and dopey smiles. They’ve always been cute, but in-game they’ve also always been built out of blocky pixels or jagged lines that compromised the concept sketches that Akira Toryama had originally imagined for them. In Dragon Quest XI, though, those same slimes fill the screen with perfectly smooth and shiny lines, and, finally, they look just like those concept sketches from yesteryear.

The same goes for the fact that in Dragon Quest XI you’ll frequently be looking over vast expanses of land, with your next destination just a spot on the horizon. Dragon Quest has always been about being taken on a light-hearted and yet expansive adventure. A few years ago I went to a special exhibition dedicated to Dragon Quest in Tokyo, and one of the major features was seeing artists render scenes from the early games into grandiose canvas paintings – a representation of what the games could render, and what they encouraged from the imaginations of the players. With Dragon Quest XI, for the first time, the in-game world itself looks like it could have been one of those paintings. Exploring it feels intimate, because the behind-the-back third person perspective gives you that “on the ground view,” and unlike the last mainstream Dragon Quest game to attempt that – VIII – the developers haven’t had to compensate for limitations in the hardware, and so they’ve been able to render views that seem to go on forever. Dragon Quest XI isn’t an open world game, but it feels more expansive than any open world out there. 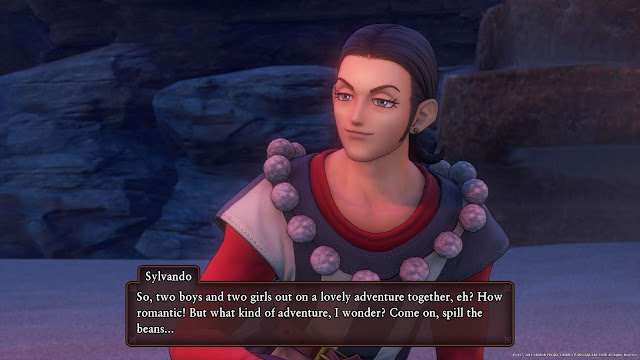 Character designs are another delight, with just about ever major character having a distinct and quirky design and personality that complements the rest of the party create a lively tone between them. The mute main hero is a bit of a blank slate, but every character that he adds to his group of misfits is a riot in their own way, and the major non-player characters that the group come across in their travels all drip with personality of their own (and the bosses even moreso). As any Dragon Quest fan knows, each major new village and town brings with it some kind of regional quirk, from accents and speech mannerisms through to the architecture, and so a bit part of the appeal in exploring Dragon Quest XI is visiting a new location, just to see what’s next on the vibrant tapestry.

Similarly, the narrative is structured in exactly the same way as most other titles in the series. Early on you’re introduced to the idea that there’s some kind of dark lord that will clearly be the final boss. But that’s never the bit that feels important. That overarching narrative, which admittedly does have the occasional twist and turn, is more a ruse than anything. The real point of it is to push players from one part of the world to the next. At each city they visit there will be some kind of local problem that they need to address, and after doing so (and now hailed as heroes), the group will get the next trail of breadcrumbs that will lead them to the next community problem.

This structure is very Japanese, and it’s part of the reason that Dragon Quest has remained so beloved as a Japanese artifact. Japan, split as it is by mountains across the landscape, is actually very isolated from one community to another, and while modern transport has mitigated the impact of the mountains, communities still tend to be quite insular. Classically, Japan’s highways, such as the Tokaido route, were also highly venerated by poets and artists, and it was a big, almost spiritual experience to walk on one of these roads, and stop in at the various villages along the way to sample delicacies and chat with the locals. In fact, to this day some of the more famous routes remain and people from all over the world travel to Japan to retrace the steps of people from centuries past. 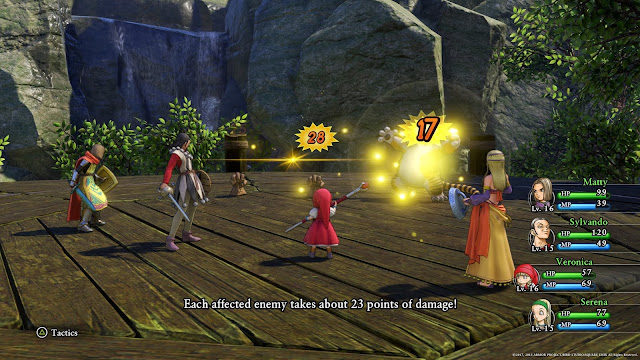 Dragon Quest’s formula taps into that rhythm, in which the journey and the locations on the way are as important as the destination. Mechanically, it has the brilliant effect of breaking the game down into distinct chapters, each with a complete narrative arc presented to players in easily digestible pieces. Dragon Quest XI is not a short game by any means, but it never feels lengthy because of the way it’s broken down into shorter vignettes. A little like a walk across one of those highways became so much more palatable when you knew there would be all kinds of places to take a leisurely digression at along the way.

Combat in Dragon Quest is delightful as well. It’s classically turn based stuff, and everything that long term Dragon Quest fans remember about the series is present and accounted for here. Metal Slimes are still a rare treat that are difficult to kill, prone to flee, and provide a wealth of experience points once defeated. Boomerangs are a useful weapon, even if they don’t boost the attack rating quite as much as a sword, because they can attack every enemy on the other side, every turn. And so on and so forth. There’s a long checklist of quirks that are unique to the Dragon Quest combat formula, and XI checks them all. Emphatically.

For people who haven’t experienced the combat system before, I suspect that it’ll take some time to get used to. Turn based systems this traditional are quaint to the point of being unfamiliar for younger players, and while Dragon Quest XI does offer plenty of information on how to play, I suspect the nuances of the combat system will only come over time. Thankfully the difficulty level isn’t set too high, and grinding isn’t onerous, as there are plenty of monsters around to find if you’re short a level or two. 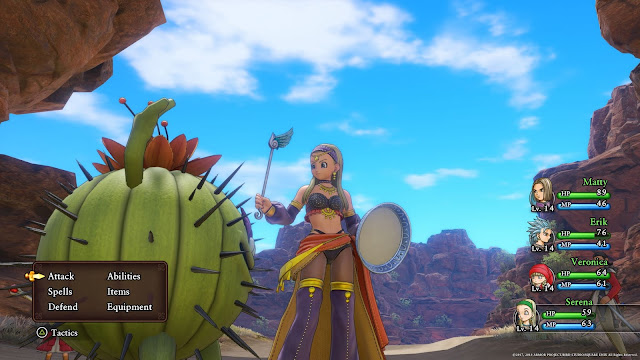 What newcomers and returning veterans alike will get a real kick out of is Dragon Quest’s wicked sense of humour. For years now, Dragon Quest has exemplified some of the finest ideas in Japanese humour; the clever use of wordplay and puns, and an appreciation for the surreal. Almost every monster has a ridiculous play on words in its name, and in every down you’ll come across some silly side story or another. Plenty of the franchise’s recurring jokes, such as the “sexy” Puff-Puff, also return in all their glory here. Those jokes are a constant reminder that Dragon Quest is a light and breezy JRPG, so even those moments where it delves into some pretty dark places, it’s never long again before it cheers up again.

Of all the JRPGs out there, Dragon Quest would surely be one of the most difficult from a localisation perspective. Wordplay-based humour is a notorious nightmare to bring across into another language, and the developers of XI seem to have delighted in making things even more difficult wherever possible. For example, the residents of one village speak in what would be haiku in the game’s native Japanese (I think – I haven’t been able to verify this with the Japanese version of the game). Haiku structure is so difficult to translate that in English that you need to be a very special kind of translator (and spend a lot of time carefully measuring every word) to have any hope of maintaining that structure in English. With dozens and dozens of these conversations in that one town, it would have been a prohibitive localisation effort to retain them all as haiku, so most of those lines of dialogue now read as a more standard kind of poetry (again, I think. I didn’t carefully count syllables for each “poem”, but in reading through them many lacked the rhythm of haiku). That’s not to say the end effect is bad, but rather to highlight that as simple, charming and funny as Dragon Quest is, these games are challenging localisation projects. Overall, in terms of capturing the tone and emphasis on wordplay, the localisation of Dragon Quest XI cannot be faulted.

I’ve written in the past about how much of a danger nostalgia can be in game development; it’s far too easy for us to wistfully look back at the games of yesteryear for what they did well, without necessarily remembering the flaws that game design has largely moved on from. Dragon Quest XI is the perfect example of how to tap into nostalgia, but not be a slave to it. Everything about this game is comfortably familiar, and yet at the same time, everything about it is designed to be as accessible as modern games should be. It’s easy to read maps and clear directions on how to move around the world. The combat and enemy designs are classical, but the voice acting and presentation are unrelentingly modern. 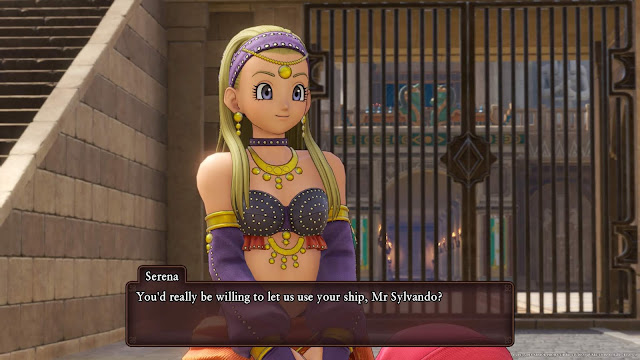 Dragon Quest XI is, from end to end, an iconic example of everything that Dragon Quest has stood for since way back in the 80’s. It’s charming and has a colourful energy that makes it very hard to put down. It’s also a proof of just what can be achieved with a highly traditional JRPG when paired with the production values that only a developer/ publisher of the size of Square Enix could achieve.

Shovel Knight gets a fighting game