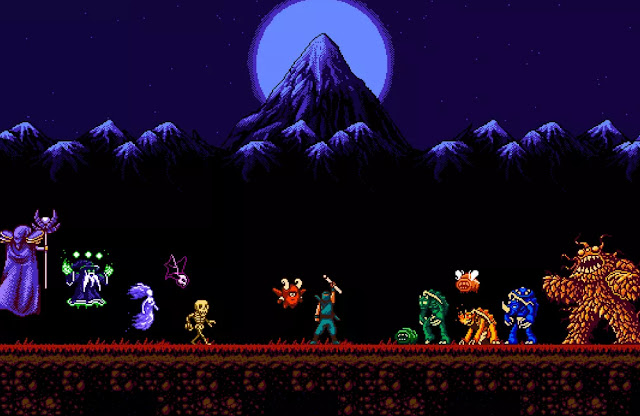 I can understand why the developers of The Messenger would take what could have been a huge, shocking twist and use it as a selling point in the game’s marketing. After all, the thing I’m talking about is one of the most visible ways of distinguishing this retro-styled platformer from a sea of others. On the other hand, I wish I’d had the opportunity to be completely blindsided—it’s a twist that fundamentally changes the game, and it would gain so much power from being a complete surprise.

So I won’t talk about it any further (though if you really must know, you won’t have to look very far). What I will say is that, based on the few hours I’ve spent with it so far, The Messenger is a game that should be on the radar of anyone with fond—or even not-so-fond—memories of old NES platformers like Ninja Gaiden. It wears its inspiration on its sleeve and then some, but instead of trying to recapture the frankly broken challenge of those old games, The Messenger is refreshing in its finely-tuned difficulty curve and tight controls.

Things begin as they do in many a game from yesteryear, with a demon king vying for control of the world, an ancient prophecy, and an unlikely hero destined to save the day. In this case, our hero is simply The Messenger, a young ninja tasked with carrying an ancient scroll to the top of a mountain. From there, you’ve got the expected medley of platforming challenges, monsters and bosses to fight, power-ups, and plenty of secrets. Combined with the pixel art, limited palette, and chiptune music emblematic of 8-bit games, you’ve got a game that sits comfortably alongside its NES inspirations. 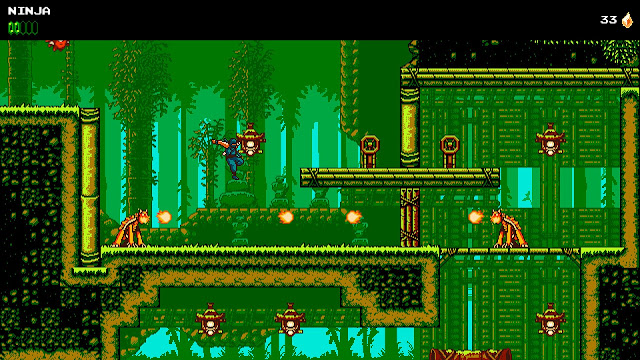 But this isn’t just a rose-tinted callback to Ninja Gaiden. The Messenger feels decidedly modern in how responsive its controls are, with a hero who runs, jumps, and wall-hops as effortlessly as you’d expect from a ninja. It may seem an obvious thing, but being able to jump precisely when you expect to and to land exactly where you intend is crucial in an action platformer.

It’s even more important than usual for The Messenger because of one of the hero’s most useful tools: cloudstepping. Under normal circumstances, our shinobi courier can only jump once before landing again. But after striking an enemy, projectile, or destructible piece of the environment while airborne, he gains another jump, and these can be chained back to back as long as there’s something to swing at.

It’s a simple mechanic, but one that opens up a world of possibilities for creative, skillful players. By design, mastery of cloudstepping can let you bypass huge swathes of each level, with the added bonus of looking like an absolute badass while you do it. Even if you’re not pushing it to its limits—I’m certainly a long, long way from doing so—there’s something intrinsically satisfying about leaping forward and whacking a lantern or a fireball to extend your airtime.

The art of Cloudstepping bestows an extra jump when a ninja connects on an airborne strike! https://t.co/dbdfVTfrpi pic.twitter.com/5J5tuJrVVZ

It’s also something that feeds nicely into The Messenger’s difficulty curve. The “normal” routes are far more forgiving than many a retro-styled platformer, but they’re also deliberately inefficient. Smart, nimble cloudstepping offers a much quicker, but much more challenging path through each level. One of the neat things about this is that it’s something you can opt in and out of on a moment-to-moment basis. At any point in time, you can decide whether or not to take the trickier path, depending on your mood, your energy, and the particulars of the situation.

Things do get more challenging as the game goes on, but it ramps up gradually enough that it rarely feels overwhelming. Even when you do find yourself dying a lot, checkpoints are regular enough that death never costs you too much progress. Instead, the main penalty is in the form of a demon following you for a while after your respawn, gobbling up any money you pick up until it feels the debt you owe it has been paid.

On top of all that, The Messenger is a genuinely funny game. Its parody of the prophesied hero trope earns a few laughs, but the real comedy is in the little interactions between characters, like a diminutive wizard with an overcompensatory cape arguing endlessly with his staff. The game regularly breaks the fourth wall—”Slow down, that was way too much text for one dialog box!”—and optional chats with the shopkeeper are a particular delight. (Also, call me immature, but I’m extremely here for the ogre boss who rips off his loincloth and tries to whip you with it. You da real MVP, ogre.) 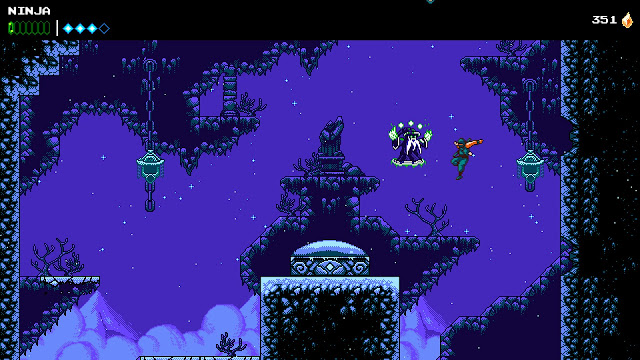 In the few hours I’ve played so far, it’s clear that The Messenger is up rock-solid platformer, with fluid movement, tight controls, plenty of humour, and pure game design genius in the cloudstepping system. And that’s saying nothing of the big twist “hidden” in all the marketing—if you can somehow bypass all that and go into the game blind, you’re in for even more of a treat.